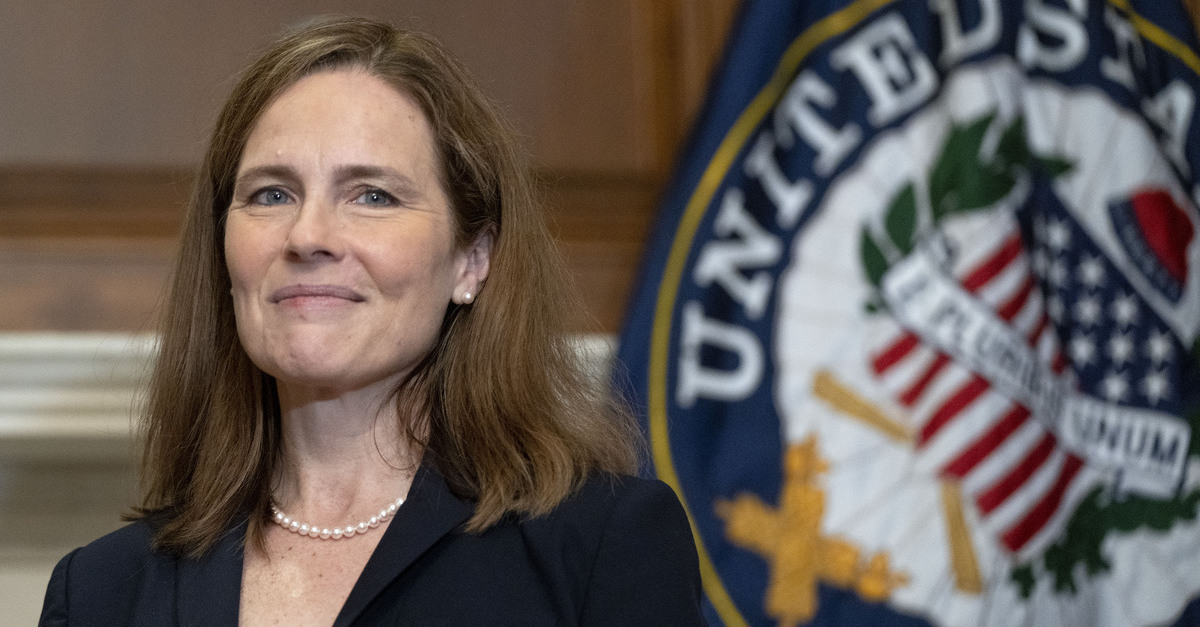 Unlike an actual filibuster, which is held on the floor of the Senate and intended to eat up time and/or slow down the momentum of a particular action in the upper chamber, the Democrats’ apparent last-ditch efforts appear to be focused on simply reaching out to and signaling common cause with those already convinced and opposed to Barrett’s lifetime appointment.

The “event” is scheduled to begin at 1 p.m. on Sunday, October 25 and “will post videos from advocates and personal storytellers every hour to tell senators to reject the nomination of Barrett,” according to a press release issued by liberal nonprofit People for the American Way.

“The Digital Filibuster will lead into the Digital Rally, which will be anchored live online,” the press release notes. “The rally will include recorded remarks from Senators Harris, Schumer, Durbin, Baldwin, Klobuchar, and leaders of at least 20 national organizations, all opposing the confirmation of Barrett — who poses a unique threat to health care, reproductive rights, LGBTQ rights, and other critical legal rights and protections.”

Democratic efforts at stalling Barrett’s momentum have themselves stalled out during the past two weeks after Senate Judiciary Committee Ranking Member Sen. Dianne Feinstein (D-Calif.) repeatedly and effusively praised Barrett’s legal acumen — at least until she was accused of “normalizing” the far-right judge’s confirmation hearings (to the chagrin of court reform advocates, leftists, progressives and liberals).

Senate Minority Leader Chuck Schumer (D-N.Y.) made pains to take what might be viewed as some substantive steps toward gumming up the works early on Friday by calling for a closed-door session to appeal to the GOP’s respect for comity and norms. That effort, predictably, went nowhere almost just as soon as it began.

Schumer later made an additional procedural motion on Friday by suggesting that Barrett’s nomination should be postponed until a week after the upcoming election—unless the White House and House Majority Leader Rep. Nancy Pelosi reach a compromise on a serially-delayed novel coronavirus (COVID-19) relief package. That effort was ultimately voted down as well.

With their options decreasing and support for Barrett increasing, according to opinion polls, Democrats appear to have made the decision that their only way forward viz. Barrett at this point is by preaching to the online choir of people who would self-selectively search out their own hashtags.

In the middle of a global pandemic and with the 2020 election ending in just days, Donald Trump and Senate Republicans are ramming through a Supreme Court nominee who will rip away our health care, gut our reproductive rights, and undermine our democracy.

We’re planning actions on social media all weekend leading up to the final vote on Barrett’s nomination on Monday, October 26th to tell our senators: If you vote to rip away our rights, we will make our voices heard.

“30 hours of debate will follow the Senate’s expected cloture vote Sunday until the final confirmation vote, and we’re posting every hour to tell our senators to reject the nomination of Amy Coney Barrett,” the online event page continues. “On Monday, October 26th at 11am, we’ll go live with senators, health care advocates, and leaders from organizations fighting for our health care, our civil rights, our reproductive rights, and our democracy to call on senators to reject Barrett – and remind them that we’re watching how they vote.”