Trump Votes in Florida Despite Mar-a-Lago’s Alleged Legal Status as a ‘Private Club,’ Not a Residence 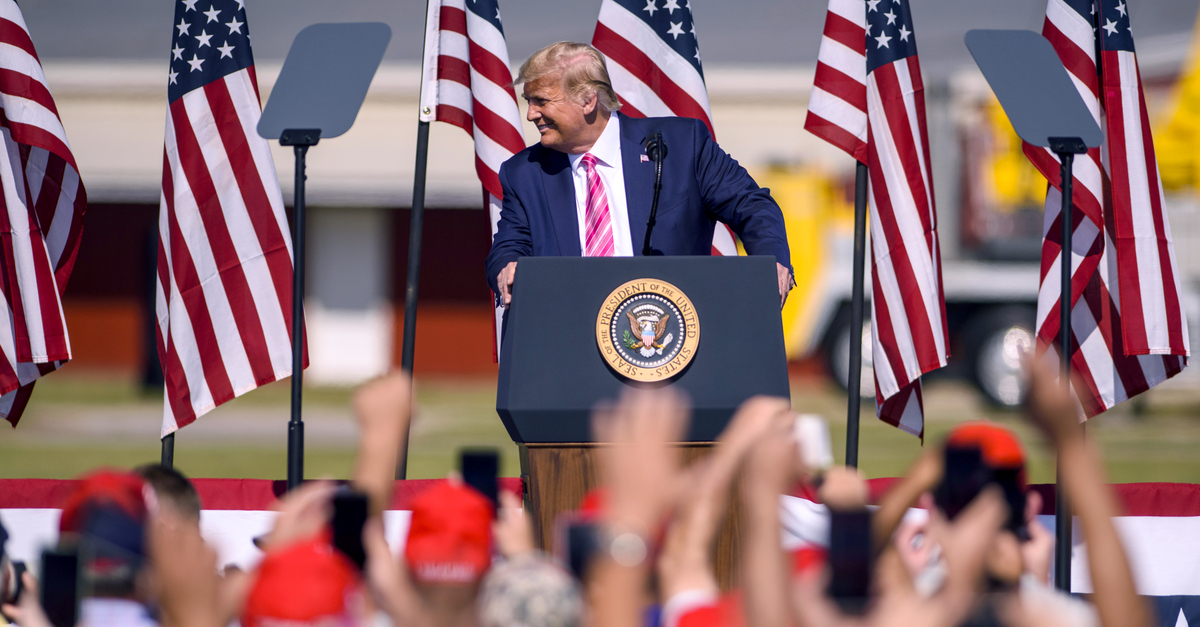 “Trump just voted in Florida,” noted popular YouTube personality Brian Tyler Cohen via Twitter. “Just a reminder that his address is listed as Mar-a-Lago. But per a use agreement [with] Palm Beach, it can’t be both a private club AND a personal residence. Meaning he voted from an invalid address.”

“Isn’t there a term for that?” Cohen added.

Many users chimed in with the response suggested by the implication raised through Cohen’s rhetorical question–with thousands of tweets quickly piling up and accusing the 45th president of committing voter fraud.

Others remarked on the circumstances as well:

But he doesn’t have a residence here and agreed that he could never make Mar-a-Lago a private home or residence again decades ago.

Is that voter fraud?

Today, voter fraud activist @realDonaldTrump plans to vote in Palm Beach County. BUT, as @SunSentinel reports, his Mar-a-Lago estate is taxed as a private club. So, can he vote as a Florida man if he has no residence? https://t.co/7GtTmMJOOE

Cohen, a political news show host, offered an argument that was clearly attractive to many of Trump’s critics, especially because of the president’s own seemingly nonstop campaign aimed at stoking fears over voter fraud.

According to a Washington Post lifestyle story from earlier this year:

[A] small group of loosely aligned preservationists, disgruntled neighbors and attorneys have unearthed documents that they assert call into question the legality of Trump’s much-publicized decision late last year to change his official domicile from Manhattan to Mar-a-Lago and to register to vote in Florida using the club’s address. According to those documents, and additional materials obtained by The Washington Post, Trump agreed in writing years ago to change the use of the Mar-a-Lago property from a single-family residence to a private club owned by a corporation he controls.

“The distinction is significant,” the Post article continues. “The property is taxed as a private club — not as a residence, according to Palm Beach County property appraiser records. Trump’s own attorney assured local officials in Palm Beach before they voted to approve the club in 1993 that he would not live there. Mar-a-Lago’s website says only that Trump maintains ‘private quarters’ at the club.”

Attorney Reginald Stambaugh represents one of Trump’s aggrieved neighbors. And though he decidedly has a vested interest in the basic legal contours here, his legal opinion would appear to support the assertion that the president violated Florida voting law.

Voting from an invalid address can carry extreme penalties and enforcement actions if the relevant local or state authorities actually care enough to investigate and prosecute alleged violations of state election laws.

A recent example that many are likely to find applicable to Trump’s situation is that of Rep. Steve Watkins (R-Kan.), the GOP congressman who recently lost a primary race for re-election after being charged with multiple felonies after listing his address on a voter registration form as a UPS Store in Topeka, Kansas.

In August 2019, Watkins filled out a change-of-address form that listed his official residence as the store. Later that year, he requested a ballot for a local election which was decided by a meager 13 votes.

Trump’s own foibles and follies viz. his claimed domicile for voting have already been well-documented. Earlier this year, he attempted to register to vote by mail in Florida using the wrong address–citing his residence as the White House in Washington, D.C.

Florida, however, mandates that a voter have an actual physical address in the Sunshine State. After being rejected, he resubmitted his ballot request and claimed he was a “bona fide resident” of Palm Beach.

But if that preexisting use agreement with Palm Beach authorities for Mar-a-Lago’s legal status is still in effect, this would appear to raise significant questions about whether Trump’s own registration is even valid.

Florida statutes are of little help in determining what is, and what is not, a “legal residence.”

“Address of legal residence” means the legal residential address of the elector and includes all information necessary to differentiate one residence from another, including, but not limited to, a distinguishing apartment, suite, lot, room, or dormitory room number or other identifier.

The definition does little more than recycle the words of the term being defined:  “legal residence[] means the legal residential address.” It’s more of a hindrance to comprehension than a panacea.

The courts have had to step in to try to clarify the matter, and one case highlights the extreme degree of detail compiled by state authorities as they attempted to determine whether a candidate for office lived in the proper district. Bottom line: the candidate wasn’t qualified because his residency wasn’t proper.

With regards to mail-in balloting, the White House itself has cited people registering to vote from their second address as an instance of “voter fraud.”  But Trump has also said that Florida should be the only state allowed to vote by mail.