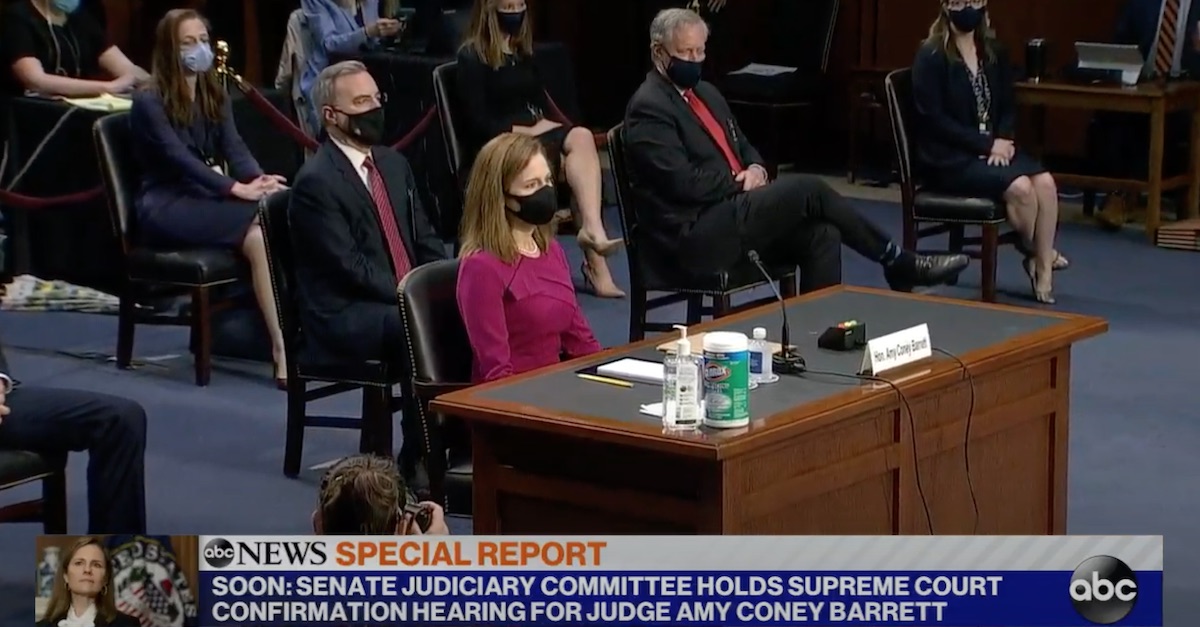 Ranking Member Sen. Dianne Feinstein (D-Calif.) and all of the other Judiciary Committee Democrats, Sen. Kamala Harris (D-Calif.) included, said in a letter to Assistant Attorney General Beth A. Williams that they find Judge Barrett’s “incomplete” Senate Judiciary Questionnaire (SJQ) to be “troubling.”

Democrats focused on three omissions in particular, the first two of them having to do with Barrett’s pro-life activities. On the first two, Democrats suggested that it was telling that Barrett and Williams didn’t disclose Barrett’s speeches on Roe v. Wade and her signing of a pro-life ad until after the media found out:

First, Judge Barrett’s SJQ supplement includes two 2013 talks – a lecture and a seminar – about the Supreme Court’s cases on women’s reproductive rights. Both talks, which were also omitted from Judge Barrett’s 2017 SJQ and attachments, were made public in press reports early yesterday. It is troubling that Judge Barrett supplemented her SJQ to include these talks only after they were identified by the press.

Second, Judge Barrett’s SJQ supplement includes an advertisement Judge Barrett signed as a member of Notre Dame University’s Faculty for Life. Similarly, this advertisement appears to have been disclosed because of anticipated press reports. Judge Barrett identified this advertisement as responsive to Question 12(b), which requires nominees to disclose “copies of any reports, memoranda, policy statements, minutes, agenda, legal filings, or other materials” that the nominee “prepared or contributed in the preparation of on behalf of any….organization” of which he or she is a member.

The third omission had to do with Barrett’s work on a case called Tenet Health System Philadelphia, Inc. v. Abdelhak, described as the “largest non-profit health care bankruptcy in the country at the time.”

“[P]ress reports have also revealed that Judge Barrett failed to disclose to the Committee her legal work as one of two lead attorneys who defended a Pittsburgh steel magnate accused of orchestrating the bankruptcy of a major Pennsylvania hospital system,” the letter continued. Presumably, Democrats are interested in playing this detail up because they see Barrett as the end of the Affordable Care Act.

Democrats said all of this raises “questions” about Barrett’s “candor” to the Senate Judiciary Committee and raises “serious concerns” that the Republican-orchestrated sprint to confirm Barrett before the election has resulted in a shoddy confirmation process. The lawmakers asked Williams for an explanation as to why the above three details were not included in Barrett’s questionnaire.

Williams, you may remember, received honors from the DOJ for her work on the Brett Kavanaugh nomination.

Notably, Williams has during her time at the DOJ commented publicly on the American Bar Association’s (ABA) ratings of President Donald Trump’s judicial nominees. Williams argued that it was a “myth” the Trump-appointed judges are often unqualified, calling Trump judicial appointments “among the most qualified in history.”

Williams said that even a biased ABA (“Peer-reviewed studies have shown the ABA evaluates nominees of Republican presidents more harshly than those of Democratic presidents…”) believes this.

The ABA found Barrett to be “well qualified,” so conservatives are citing the ABA as an authority on the matter for the moment.