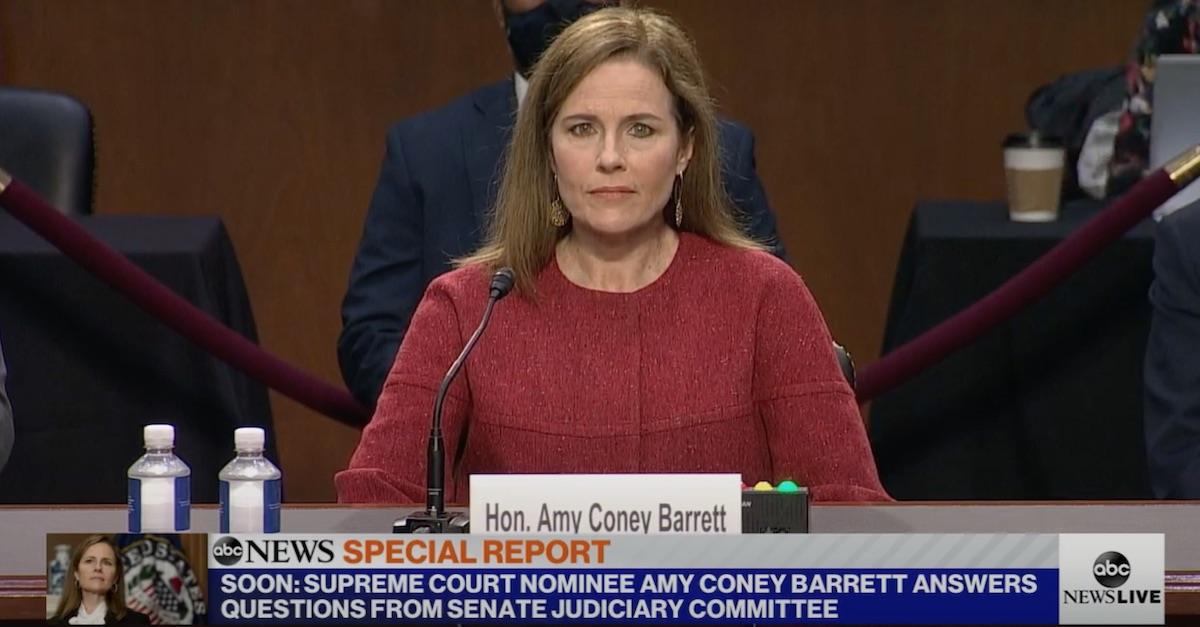 The Lawyers Committee for Civil Rights Under Law, a nonpartisan, nonprofit group that came into existence in 1963 at the request of then-President John F. Kennedy, opposed Judge Amy Coney Barrett’s confirmation to the U.S. Supreme Court on Tuesday. In a 22-page report, the group said that while Judge Barrett is “competent to serve” on the Court, a thorough review of her authored opinions, legal articles, and statements showed that she failed to demonstrate “respect for the importance of protecting civil rights.”

“Judge Barrett’s record demonstrates that she is predisposed to side with law enforcement at the expense of defendants’ constitutional rights, and with employers and business interests in disputes with employees and consumers,” the report stated. “Based on her record, we believe she will narrowly construe the Constitution and civil rights statutes in a way that limits their scope and effectiveness, and that she will defer to state and local efforts to suppress the vote. In particular, her suggestion in her dissent in Kanter v. Barr that the rights to serve on juries and to vote belong ‘only to virtuous citizens’ is cause for great concern among those who recognize that the right to vote is foundational to all civil rights.”

The group also took aim at her legal philosophy, which was heavily influenced by her former boss and mentor Justice Antonin Scalia, and reflected an “inconsistent” commitment to maintaining civil rights. The group said Barrett has shown she will side with the government and corporations at the expense of the individual.

“Judge Barrett’s judicial philosophy of strict textualism and originalism threatens the individual rights that have been established by the Supreme Court for decades,” the group wrote. “Particularly in the areas of civil rights, criminal justice, immigration law, and reproductive freedom, Judge Barrett’s strict textualist and originalist approach to interpreting statutes and the Constitution tends to favor the government and corporations over the individual, the employer over the employee, and the immigration official over the immigrant.”

The report also criticized originalism as a judicial philosophy, arguing that it forces constitutional values to be “frozen at the time the constitutional text was ratified,” and therefore fails to fully consider issues facing contemporary society—leaving LGBTQ rights, women’s rights, and personal privacy virtually uncontemplated.

“While Judge Barrett’s careful writing style and learned recitation of history give her opinions the appearance of impartiality, a close look at those opinions reveals that she advances a very conservative ideological agenda,” the report stated.

Co-Chair of the Lawyers Committee retired Judge Shira Scheindlin, who in 2013 ruled that New York’s “Stop and Frisk” policy was unconstitutional, said Barrett’s record on civil rights wasn’t aligned with most Americans.

“Judge’s Barrett’s record reveals that her views are not those shared by the vast majority of the American people,” she said in a statement accompanying the report. “Our country deserves a Justice who will be faithful to the principle of equal justice under law and who will respect the precedents that the Supreme Court has always espoused. She has not made that commitment.”