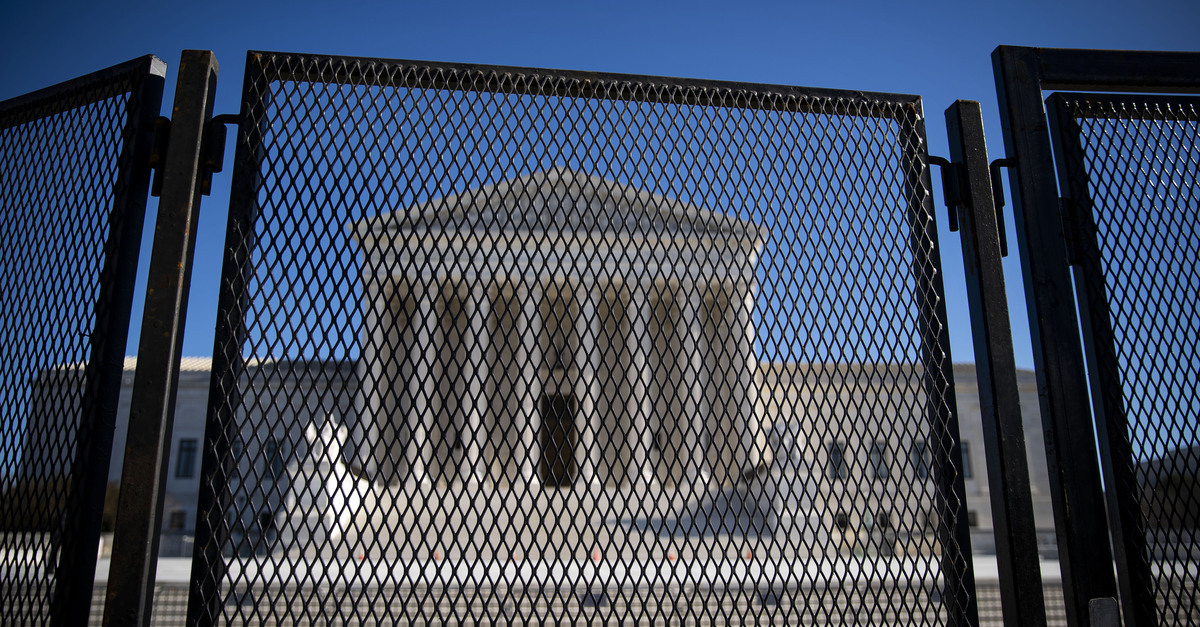 January 10, 2021: Protective fencing was erected around the U.S. Supreme Court in Washington, D.C. days after a pro-Trump mob attacked law enforcement, stormed and desecrated the U.S. Capitol on January 6.

The Supreme Court of the United States heard oral arguments in Caniglia v. Strom on Wednesday. The case raises questions of Fourth Amendment limitations on police rights to enter private homes for the purpose of checking the well-being of those inside.

The case arose after a domestic argument between Edward Caniglia and his wife. During the couple’s argument, Caniglia brandished an unloaded gun, and told his wife to “put him out of his misery.” His wife left the premises and called the Cranston Police Department to request that they perform a wellness check. Police determined that Caniglia presented an imminent danger to the community and recommended he check himself into a hospital. Although Caniglia complied and there was no conflict, police entered the man’s home and seized all of his firearms and ammunition.

Caniglia later sued the officers under 42 U.S. Code §  1985 for violation of his civil rights, claiming the seizure violated his Fourth Amendment rights against unreasonable searches and seizures. Caniglia lost in both district court and the First Circuit, which found no rights had been violated because the officers’ actions were legal under the Fourth Amendment’s “community caretaker” exception.

At oral arguments, Caniglia’s attorney, Shay Dvoretzky, argued that any ruling that the police’s actions were legal as a warrantless search would “eviscerate the Fourth Amendment.” Dvoretzky argued against applying a general “community caretaking” is an insufficient basis for a warrantless search of a person’s private home. The justices met that argument with a noticeably chilly reception.

Time and again, the justices raised hypothetical examples of police entering private homes to check the safety of residents. Chief Justice John Roberts began with an example of an elderly woman who failed to show up for dinner as expected. Other justices followed Roberts’ lead, tossing around hypotheticals involving helpful cops, ranging from police who arrive to check on a potentially suicidal individual, to those aiming to protect child welfare, to those who might rescue a cat from a tree.

Although the raising of hypotheticals is nothing new at oral arguments, the sheer number of hypotheticals raised Wednesday signaled the Court’s unwillingness to bar well-intentioned police from entering homes for helpful purposes.

Justice Brett Kavanaugh went a step further, noting several times the frequent complexities of police work. “Time is of the essence” in many police decisions, repeatedly remarked the justice.

Justice Stephen Breyer, obviously frustrated with the legal framework suggested by Dvoretzky, raised a number of examples of his own:

There are so many situations where it’s obvious the police should enter. You know — a baby’s been crying for five hours, nobody seems to be around. A rat’s come out of a house at a time when rats carry serious disease and have to be stopped.  A person goes into the house that the police think but the people inside the house don’t know that the person has a serious communicable disease…

Later, Justice Breyer had marginally more patience — but still a substantial helping of skepticism — for Marc DeSisto’s argument on behalf of the Rhode Island police department.

“My problem is if you take a caretaker exception and read that into the word reasonable, there’s no stopping.” Breyer told DeSisto.  “We don’t know how far we’ll go,” he continued before warning, “But if you are absolute, you may cause a different problem.”

Justice Samuel Alito appeared frustrated as well, remarking that both sides presented the case in a way that is “most unhelpful,” before pelting Dvoretzky with multiple hypotheticals. Later, though, Alito remarked that there was something “troubling about the caretaker exception.” Noting the lack of “any clear boundaries,” Alito seemed loath to adopt a broad exception even for well-intentioned police.

Justice Sonia Sotomayor picked up on Alito’s concerns, saying, “I think that Justice Alito hit the nail on the head.” Although Sotomayor had earlier joined her colleagues in discussing numerous hypothetical situations in which police serve important community protection functions, she raised concerns about the warrantless search exception to go too far.

Remarking that jurisdictions tend to have variations among their community caretaker laws, the justice said she was “concerned deeply  about the First Circuit’s claim that there is no requirement that officers must select the least intrusive means of fulfilling community-caretaking responsibilities.”

I think what everyone has forgotten here —that at least in this situation, there was no immediate danger to the person threatening suicide, and no immediate danger to the wife, because the suicid[al] person was removed to a hospital. So the issue is can the police, notwithstanding that and notwithstanding the ability to ask the wife whether she’d consent, decided on their own to go in and seize the gun.

Assistant to the Solicitor General Morgan Ratner argued for the Department of Justice as an amicus supporting the respondent police department. The Biden DOJ filed an amicus brief in February that not only supported the police position in the case, but also made a controversial argument in the alternative: even if the cops lost on the issue of a community-caretaking exception, they should be protected from Caniglia’s lawsuit by the doctrine of qualified immunity.

“If any doubt exists about the reasonableness of the respondent officers’ actions,” the government wrote, “this Court should affirm on the alternative ground that the officers are entitled to qualified immunity.”

The court allowed extra time above the 10 minutes that had been scheduled for the government’s argument. Thereafter, Chief Justice Roberts similarly gave extra time to Dvoretzky for rebuttal. That rebuttal devolved into the most damaging moment of oral argument for Caniglia’s case.

As Dvoretzky responded to Justice Kavanaugh’s questions about police making split-second decisions, his answers descended down a rabbit hole in which he suggested to the Court that police should be expected to call mental health professionals for guidance while en route to a wellness-check.

Justice Sotomayor interrupted Dvoretzky’s answer, saying, “That seems to me going too far. Let’s be realistic.”