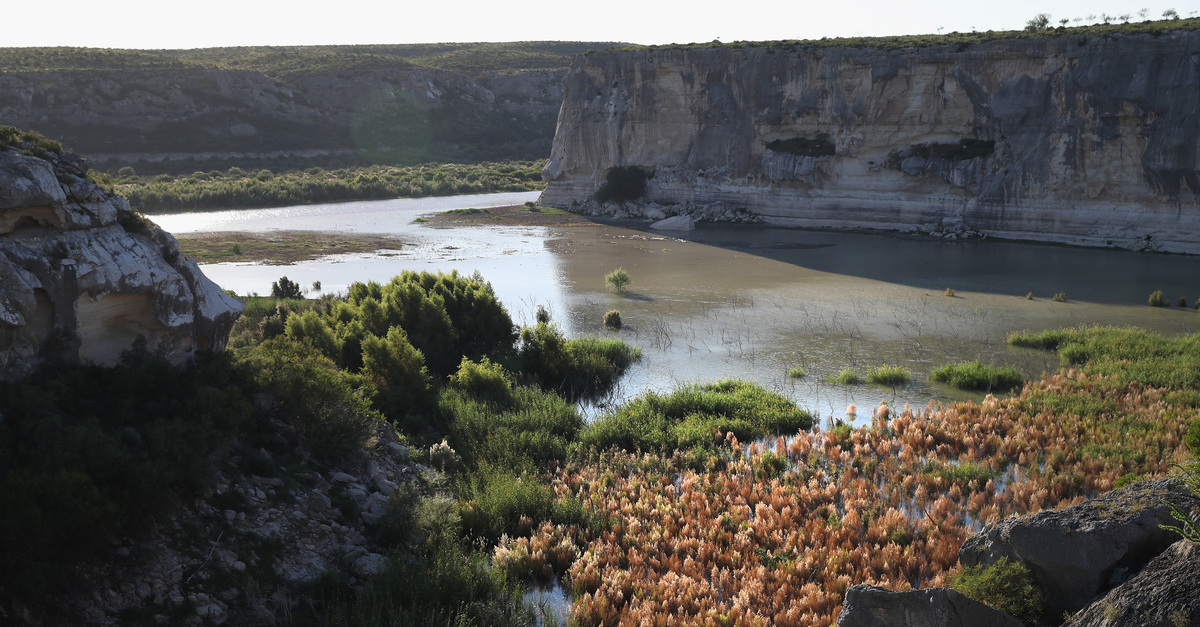 The Pecos River merges with the Rio Grande (L), at the U.S.-Mexico border on October 16, 2016 near Landry, West Texas. The Rio Grande, which forms the Texas-Mexico border, is supplemented by various rivers along its course before flowing into the Gulf of Mexico.

The U.S. Supreme Court on Monday ruled against Texas in a dispute with New Mexico over water rights. The case and decision present a somewhat uncommon instance of the court’s original jurisdiction.

Writing for a 7-1 majority, Justice Brett Kavanaugh denied a motion by the Lone Star State to review a 2015 determination by the Pecos River Master. The master previously determined that New Mexico was entitled to a credit for lost rainwater after Texas asked for the water to be stored in a federal reservoir for use during drought season–which resulted in a massive depletion of the resource.

The river master here–and the court agreement that established their authority–is an oddity in American water law. Said master is one of only two such masters in existence. (The other was appointed over a dispute concerning the Delaware River in the 1950s.)

“This is a case about evaporated water,” Justice Kavanaugh notes. “In the southwestern United States, the Pecos River begins near Santa Fe, New Mexico, and winds its way south for hundreds of miles through New Mexico and Texas before flowing into the Rio Grande River on the Texas-Mexico border. The 1949 interstate Pecos River Compact provides for equitable apportionment of the use of the river’s water by New Mexico and Texas.”

The current fracas between the two southwestern states has to do with the heavy western rains of 2014. Those unusual torrents of precipitation resulted in a massive boon for the tributary that feeds the natural dividing line between the U.S. and Mexico.

The oversupply of water was stored in the Brantley Dam and Reservoir in New Mexico which was built in 1984 and which is currently operated by the U.S. Bureau of Reclamation. Flood control purposes necessitated the original water capture but then along came Texas. The Lone Star State requested that the water be held in the reservoir and used for the next irrigation season.

During the time the water was held, over 20,000 acre-feet (several million gallons) faded back into the troposphere–an ultimately unnecessary loss because Texas’s plan didn’t actually pan out. New Mexico was keen to all of the goings-on, however, and put Texas on notice about that potential loss when the original request to hold the water for longer than necessary was made.

After failing to come to an agreement over the precious liquid, the Pecos River Master stepped in and ruled in New Mexico’s favor–releasing the water in 2015 when Texas couldn’t even use it for the purposes they originally intended. A double whoops resulting in Monday’s judgment against Texas’s clearly poor aquatic judgment.

“For that reason, the River Master awarded New Mexico delivery credit for the evaporated water,” the majority opinion continues. “We agree with the river master’s determination, and we deny Texas’s motion for review.”

Texas, for their part, argued that it was New Mexico’s fault that the water evaporated. The federal government and New Mexico argued the opposite–saying the Land of Enchantment deserves the credit in question because Texas was the state that made the request.

“If a quantity of the Texas allocation is stored in facilities constructed in New Mexico at the request of Texas, then . . . this quantity will be reduced by the amount of reservoir losses attributable to its storage, and, when re-leased for delivery to Texas, the quantity released [minus] channel losses is to be delivered by New Mexico at the New Mexico-Texas state line.”

We agree with the river master that the text…of the manual easily resolves this case. Texas’s Pecos River commissioner asked that the water be stored at a facility in New Mexico when, in November 2014, he sent New Mexico’s commissioner an e-mail with the plain-spoken subject line “Texas request for storage.” In that e-mail, Texas requested that New Mexico hold Texas’s “portion of the flows until such time as they can be utilized in Red Bluff Reservoir.” New Mexico did so. But New Mexico was careful to remind Texas that the water “belongs to Texas,” and that, “[b]ut for Texas’ request, New Mexico would have released” the water “to the Texas state line.” New Mexico also added (correctly, as it turns out) that “[e]vaporative losses . . . should thus be borne by Texas.”

During oral argument, most of the eight justices hearing the case (which was the first argued case after the death of Ruth Bader Ginsburg) appeared skeptical of Texas’s argument. According to SCOTUSBlog, Justice Neil Gorsuch even snapped at Texas Solicitor General Kyle Hawkins during their presentation.

And, self-evidently, the court’s reported skepticism held the day. For the overwhelming majority at least.

Archconservative Justice Samuel Alito concurred in part and dissented in part. While finding that Texas’s interpretation was wrong, he also wrote that the Pecos River Master’s calculation was probably incorrect and would have remanded the case for further consideration–while also complaining that the court didn’t go far enough in its decision to make the disposition of further disputes less likely to occur.

Justice Amy Coney Barrett took no part in the consideration or decision of the case.

The decision came down just days after the Supreme Court rejected Texas Attorney General Ken Paxton’s (R) attempt to sue Pennsylvania, Wisconsin, Michigan and Georgia over the 2020 election results. That lawsuit tried to use the Supreme Court’s original jurisdiction to upend outcomes of elections in states that President Donald Trump lost. 28 USC §1251(a) gives the U.S. Supreme Court “exclusive jurisdiction” over “all controversies between two or more States.”

The Paxton lawsuit led to days of bizarre and absurd briefs, but none of it went anywhere. That, in turn, led to some secession rhetoric.