The Supreme Court of the United States has ended the Biden administration’s eviction moratorium extension in an unsigned, per curiam order, sparking dissents by all three justices on the high court’s left flank.

“It is indisputable that the public has a strong interest in combating the spread of the COVID–19 Delta variant,” the majority concluded. “But our system does not permit agencies to act unlawfully even in pursuit of desirable ends.”

The court found that such a measure could only be passed by the legislature.

“If a federally imposed eviction moratorium is to continue, Congress must specifically authorize it,” the high court summarized.

When the Centers on Disease Control and Prevention extended the eviction moratorium earlier this month, President Joe Biden appeared to acknowledge the decision would not pass high court review.

“Well, look, the courts made it clear that the existing moratorium was not constitutional,” Biden said on Aug. 3, adding later that “by the time it gets litigated, it will probably give some additional time while we’re getting that $45 billion out to people who are, in fact, behind in the rent and don’t have the money.”

The reason for the president’s lack of confidence in the measure’s staying power was clear. A federal judge blocked the initial moratorium in May, in a ruling that was stayed by the D.C. Circuit. The Supreme Court initially declined to intervene from there because, in the words of Justice Brett Kavanaugh, the “CDC plans to end the moratorium in only a few weeks.”

Then, amid a flurry of protest from Rep. Cori Bush (D-Mo.) and others, the CDC extended the moratorium. A coalition of realtors and landlords returned to court, claiming the agency bucked to a “tidal wave of political pressure.” The judge who initially blocked the moratorium, U.S. District Judge Dabney Friedrich, found that she could not stop it again barring action by the Supreme Court, which was widely expected to end the CDC’s policy.

Late night on Thursday, the conservative majority did just that in an unsigned order.

The only public dissents came from Justices Stephen Breyer, Sonia Sotomayor, and Elena Kagan, who argued a matter of such importance should have been decided with the benefit of a hearing.

“These questions call for considered decision-making, informed by full briefing and argument,” Breyer wrote, in a dissent joined by Sotomayor and Kagan. “Their answers impact the health of millions. We should not set aside the CDC’s eviction moratorium in this summary proceeding.”

The dissenters included a chart of rising COVID-19 infections to illustrate their point—and had the data in their corner. 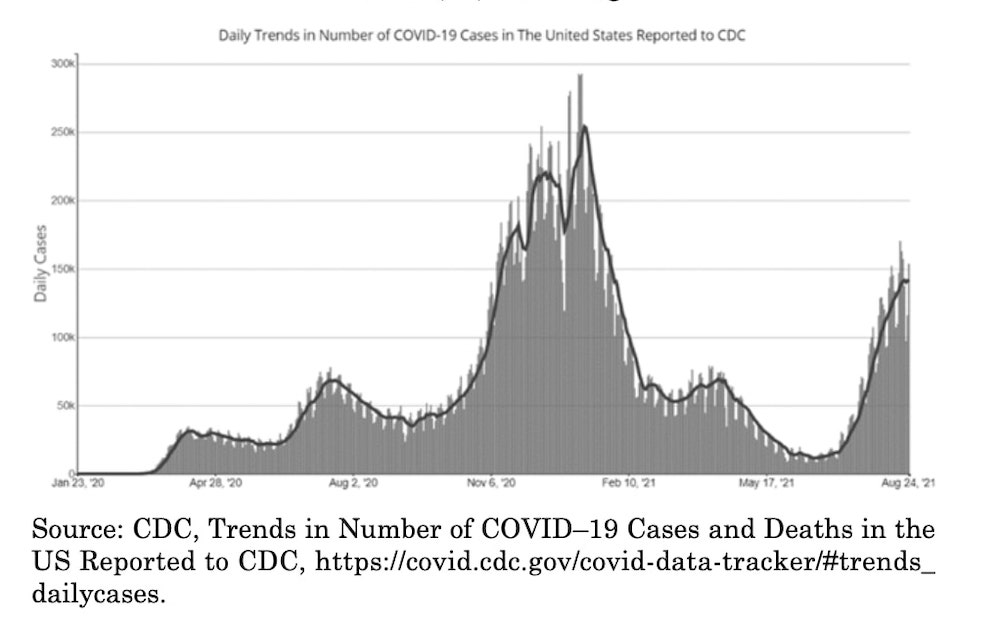 The majority focused on the “irreparable harm” of the landlords.

“The moratorium has put the applicants, along with millions of landlords across the country, at risk of irreparable harm by depriving them of rent payments with no guarantee of eventual recovery,” the order said. “Despite the CDC’s determination that landlords should bear a significant financial cost of the pandemic, many landlords have modest means.”

White House Press Secretary Jen Psaki said in a statement that the moratorium “saved lives” by preventing the pandemic’s spread.

“The Biden Administration is disappointed that the Supreme Court has blocked the most recent CDC eviction moratorium while confirmed cases of the Delta variant are significant across the country,” Psaki wrote. “As a result of this ruling, families will face the painful impact of evictions, and communities across the country will face greater risk of exposure to COVID-19.”

“In light of the Supreme Court ruling and the continued risk of COVID-19 transmission, President Biden is once again calling on all entities that can prevent evictions – from cities and states to local courts, landlords, Cabinet Agencies – to urgently act to prevent evictions,” she added.