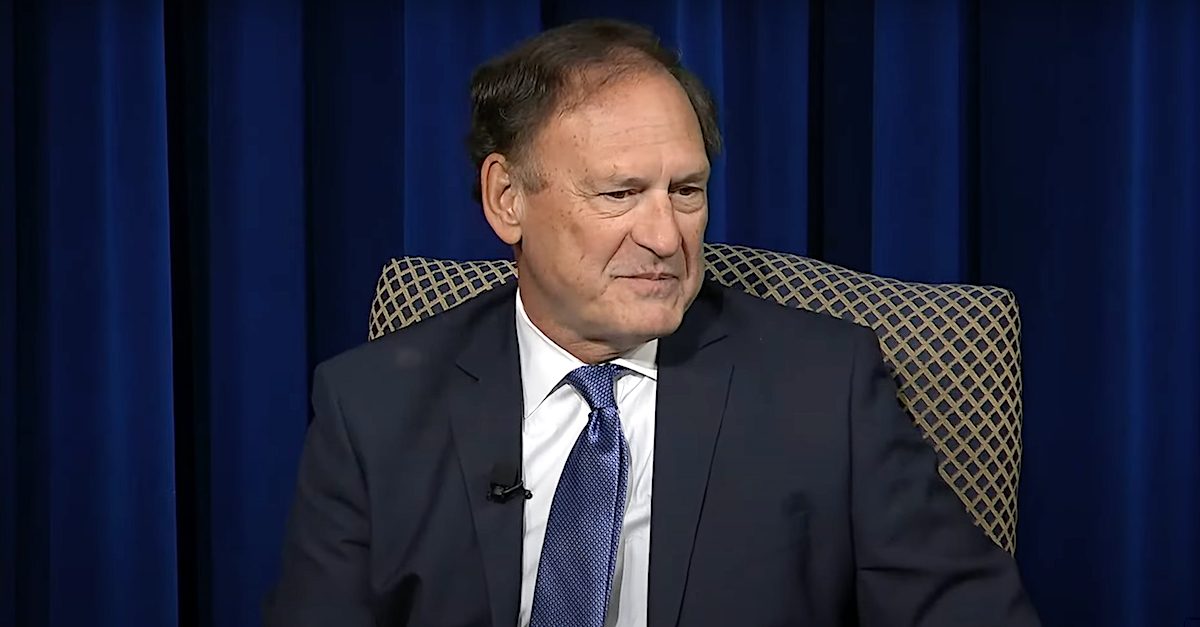 In a statement issued through a court spokesperson, Justice Samuel Alito denied leaking information about the U.S. Supreme Court’s then-upcoming decision in Burwell v. Hobby Lobby Stores, Inc. to Christian activists and friends with whom he dined on June 3, 2014.

Alito’s denial that he played a role in any leak of the Hobby Lobby holding was reported by the New York Times, the Washington Post, and NBC News.  The denial was issued in response to an explosive New York Times piece published Saturday morning. In it, the Rev. Rob Schenck, a onetime conservative Christian leader who has now aligned himself with more progressive causes, described a significant network of wealthy operatives — of which he was a part — who collectively sought to meet and make their views known to various justices and Supreme Court staffers through social events and through donations and functions involving the Supreme Court Historical Society.

According to the Times, Schenck said he was made aware of the Hobby Lobby ruling after Gayle Wright, one of his so-called “star donors,” and her since-deceased husband Don Wright, both of Ohio, dined with Alito and his wife at the justice’s home.

“The evidence for Mr. Schenck’s account of the breach has gaps,” the Times admitted.

However, the newspaper did link to and publish a letter reportedly written by Schenck to Chief Justice John Roberts over the summer. The letter claims “a donor” — who Schenck reportedly told the Times was Gayle Wright — leaked the Hobby Lobby holding to him after the aforementioned dinner with Alito.  The letter then offers assistance should the Court wish to probe either the purported Hobby Lobby leak or the more recent leak of Alito’s eventual majority opinion to overturn the abortion rights previously enshrined in Roe v. Wade and Planned Parenthood v. Casey.

Additional New York Times interviews with Schenck’s relatives and associates generally indicated that Schenck prepared a pro-Hobby Lobby public relations push in the lead-up to the release of the opinion and ignored questions about whether materials in the alternative — if the court ruled against the evangelically-driven craft store chain — should be prepared in advance.

According to Alito’s statement, the justice and his wife had a “casual and purely social relationship” with Wright and her husband.

Any “allegation that the Wrights were told the outcome of the decision in the Hobby Lobby case, or the authorship of the opinion of the Court, by me or my wife, is completely false,” Alito said in the statement.

The Times noted, however, that Alito did not deny that the June 3, 2014 dinner had occurred.

“I never detected any effort on the part of the Wrights to obtain confidential information or influence anything that I did in either an official or private capacity and I would have strongly objected if they had done so,” Alito continued. “I would be shocked and offended if those allegations are true.”

But that is precisely what Schenck claimed to the Times was occurring.

Gayle Wright, in an interview with the Times, said that a justice doesn’t “ever tell you about cases.”

“They aren’t allowed to,” she reportedly continued. “Nor would I ask. There has never been a time in all my years that a justice or a justice’s spouse told me anything about a decision.”

But Schenck claims Wright told him ahead of time that she would be dining with the Alitos, wrote to him a few days later to say that she had “news” about the Hobby Lobby decision, and then spoke to him by phone to indicate that a pro-Hobby Lobby opinion would soon be released, according to the Times report.

After learning the information, Schenck told the Times he eventually told members of the Green family, the evangelical Christians who own Hobby Lobby, that the decision would be in their favor.

Hobby Lobby founder David Green declined to comment, according to the Times, and Barbara Green, his mother, said she “had no idea which way” the Supreme Court decision “was going to go” before it was announced, the Times reported.

“Mr. Schenck’s allegation creates an unusual, contentious situation: a minister who spent years at the center of the anti-abortion movement, now turned whistle-blower; a denial by a sitting justice; and an institution that shows little outward sign of getting to the bottom of the recent leak of the abortion ruling or of following up on Mr. Schenck’s allegation,” the Times said in a paragraph which sums up the controversy.

Despite denials from Wright and Alito, Schenck, in a statement to the Washington Post, said he was sticking by his story — but he declined to comment further.

In a July 2022 report — long before Schenck claimed Hobby Lobby was leaked — Politico noted that Schenck “headed the Faith and Action group headquartered near the Supreme Court from 1995 to 2018.”

Schenck “arranged over the years for about 20 couples to fly to Washington to visit with and entertain Supreme Court Justices Clarence Thomas, Samuel Alito and the late Antonin Scalia,” Politico reported at the time.

The Politico report from last summer said the Wrights make their fortunes in furniture and real estate.

The Wrights also became trustees of the Supreme Court Historical Society, both Politico and the New York Times noted.

Both publications also called attention to Don Wright’s two obituaries, which both indicated that he enjoyed hunting with Scalia.

In a recent discussion before the Heritage Foundation, Alito said the following when asked about the more recent leak of his draft opinion in Dobbs v. Jackson Women’s Health Organization:

It was a grave betrayal of trust by somebody, and it was a shock because nothing like that had happened in the past. So, it certainly changed the atmosphere at the court for the remainder of last term. The leak also made those of us who were thought to be in the majority and supportive of overruling Roe and Casey targets for assassination because it gave people a rational reason to think they could prevent that from happening by killing one of us. And we know that. A man has been charged with attempting to kill Justice Kavanaugh. It’s a pending case, so I won’t say anything more about that.

Alito then pivoted and said the court was looking forward to its “new term” and said he wanted things to get “back to normal to the greatest degree possible” — especially with reference to the court’s operating procedures in light of the Covid-19 pandemic.