A Holocaust survivor struggled for more than half a century to reclaim a Nazi-looted masterpiece of impressionist artwork, and her family has spent the better part of two decades litigating with the Spanish government over its return.

With that battle reaching the Supreme Court on Tuesday, the justices signaled that the painting’s fate may hinge upon the question of whose law applies: that of Spain or California.

“Welcome to the United States”

“Can everyone agree that this is a beautiful painting?” Justice Stephen Breyer asked, toward the conclusion of oral arguments that spanned a little more than an hour.

“Yes, it is, your honor,” replied attorney Thaddeus Stauber, representing the Kingdom of Spain for the firm Nixon Peabody. “It’s a very, very beautiful painting.”

What Stauber disputed was that California law should apply because the family’s descendant moved there, which he said would subject international disputes to differing outcomes based on where a potential litigant moved.

“Welcome to the United States,” Roberts countered. “That’s how the courts work, and if a private citizen of the United States moves from New York to Ohio, the law that applies to him is going to change as well.”

The painting itself also has traveled extensively. According to the family’s epic, heartbreaking and largely undisputed account, Paul Cassirer bought Rue Saint-Honoré in 1900 directly from Pissarro’s exclusive agent in France, Paul Durand-Ruel.

“Lilly inherited the painting in 1926 and displayed it prominently in her parlor, where her grandson, Claude Cassirer, the original plaintiff in this case, played as a child,” the family’s attorney David Boies wrote in a petition for Supreme Court review. The family said that the Nazis forced Lilly to “sell” the painting for the equivalent of a measly U.S. $360—paid to an account that she could not access—in order for her to obtain exit visas for her and her husband, Professor Otto Neubauer, to flee Germany.

The painting now has an estimated value of $40 million. 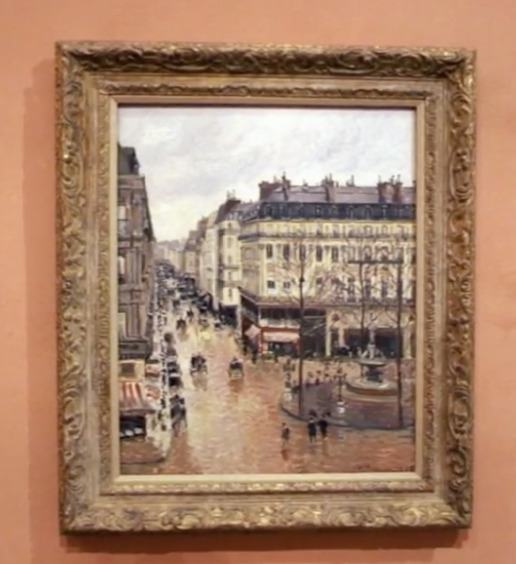 Undertaking a decades-long quest to recover the work after the war, Lilly Cassirer was declared the painting’s rightful owner by the U.S. Court of Restitution Appeals in 1954. The family says they were not aware that Pissarro’s Rue Saint-Honoré was sold to galleries and collectors in Los Angeles, New York, and St. Louis in the ensuing decades.

In 1976, the painting was sold on consignment from New York City to Baron Hans Heinrich von Thyssen-Bornemisza, the scion of the Thyssen Steel dynasty in Germany.

That was the same year that Congress passed the Foreign Sovereign Immunities Act (FSIA), the law establishing limitations on whether a foreign nation can be sued in U.S. courts.

“Congress struck a comprehensive balance as to how claims against foreign states should be adjudicated,” the family’s lawyer David Boies said, referring to the FSIA.

A foreign government entered the history of the painting when Spain and the Baron established the Thyssen-Bornemisza Collection Foundation some 25 years later in 1993. The Baron sold the Pissarro, along with much of the collection, for $350 million.

In the family’s Supreme Court petition, Claude Cassirer says that he recognized the Pissarro as the one in the Thyssen’s collection by the “haunting black and white photo of the painting hanging over the sofa in Lilly’s parlor.” Notifying the Spanish government in 2001, the Cassirer family has been embroiled in campaigns of diplomacy and litigation ever since.

The lawsuit that sparked Tuesday’s Supreme Court battle was filed in 2005, with one justice remarking the choice of law dispute could bring litigation “back at the starting gate, potentially.”

Despite finding that the Thyssen ignored “red flags” that the painting was looted, the Ninth Circuit found that Spanish law applied, effectively scuttling the family’s case. Those courts found that the family failed to prove the Thyssen’s “actual knowledge” of the theft.

Boies, the Cassirer family’s attorney, argued remotely because of his reported COVID-19 diagnosis. He told the justices that the Ninth Circuit should have applied California law.

In 2020, the high court unanimously ruled against families of Holocaust survivors, finding that U.S. federal court was not the correct forum to adjudicate the cases. The high court’s ruling in this case could further restrict Holocaust survivors’ avenues for redress in U.S. courts—or, potentially, open windows of state law.