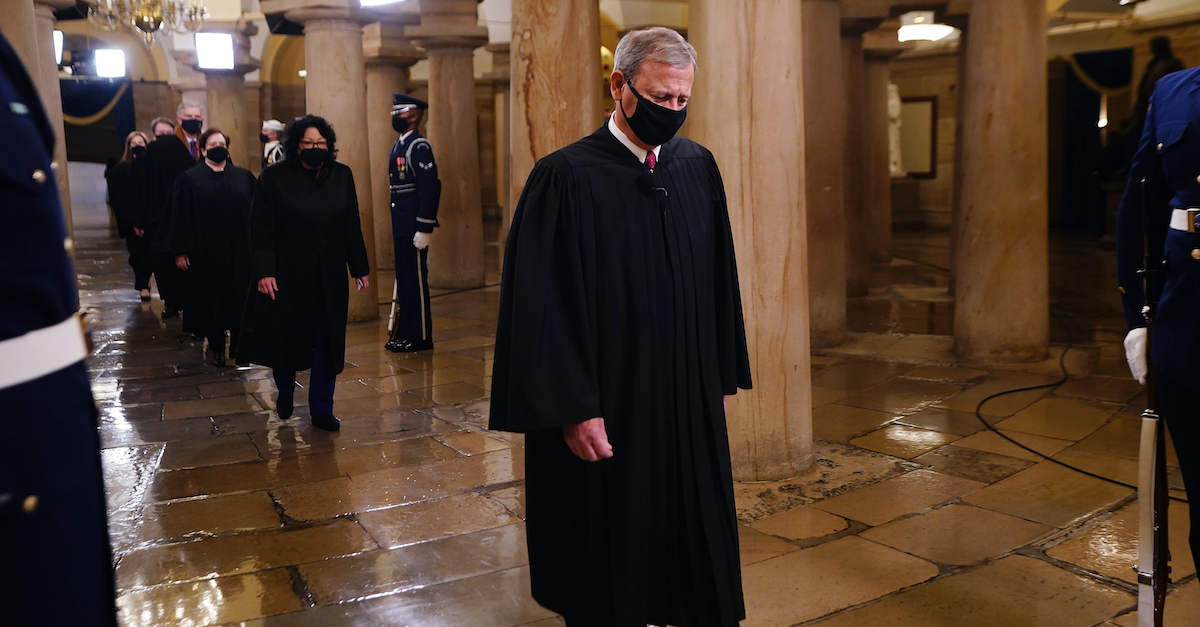 The Supreme Court of the United States unanimously ruled in favor of recognizing the sovereignty of Germany and Hungary in two cases on Wednesday, finding that that an exception to the Foreign Sovereign Immunities Act (FSIA) does not apply. Families of Holocaust survivors and victims of Nazi property crimes were, thereby, denied a pathway to justice in the U.S. federal court system.

Chief Justice John Roberts penned the opinion for the unanimous court in Germany v. Philipp, writing that Nazis’ plunder of art—even though part of a genocide—falls under the “domestic takings rule” under the FSIA. Roberts and the other eight justices agreed that adjudicating this matter in the U.S. courts would “arguably” in itself be a violation of international law:

The text of the FSIA’s expropriation exception, however, supports Germany’s reading. The exception places repeated emphasis on property and property-related rights, while injuries and acts associated with violations of human rights law, such as genocide, are notably lacking—a remarkable omission if the provision was intended to provide relief for atrocities such as the Holocaust. A statutory phrase concerning property rights most sensibly references the international law governing property rights, rather than the law of genocide. The heirs’ position would arguably force courts themselves to violate international law not only by ignoring the domestic takings rule, but also by derogating international law’s preservation of sovereign immunity for violations of human rights law.

The “expropriation exception” to foreign sovereign immunity permits lawsuits “in which rights in property taken in violation of international law are in issue.” But SCOTUS held that the phrase “refers to violations of the international law of expropriation and thereby incorporates the domestic takings rule.” The Congressional Research Service explains this rule well:

Under the FSIA’s expropriation exception, foreign sovereign immunity is unavailable in cases “in which rights in property taken in violation of international law are in issue” and the property meets statutory requirements for a commercial nexus to the United States. The heirs to art dealers in Germany contend that the Welfenschatz sale was involuntary and amounted to a “tak[ing] in violation of international law” that falls within the exception. A government that takes property of an alien may violate international law if the taking “is not for a public purpose, is discriminatory, or is [done] without provision for prompt, adequate, and effective compensation.” But the expropriation exception is limited by what has become known as the “domestic takings” rule. Under this rule, it is U.S. courts’ “consensus view” that foreign governments that take the property of their own nationals within their own territory typically do not breach international law and are outside the scope of the expropriation exception. Because the art dealers were German citizens and companies, and Germany allegedly forced the sale within its own borders, the defendants argue that this is a “domestic takings” case to which sovereign immunity still applies.

In its holding, the Supreme Court similarly noted that the “domestic takings rule” which Germany homed in on in arguments “derives from the premise that international law customarily concerns relations among states, not between states and individuals.”

“Historically, a sovereign’s taking of a foreign national’s property implicated international law because it constituted an injury to the state of the alien’s nationality. A domestic taking, by contrast, did not interfere with relations among states,” SCOTUS said. “This domestic takings rule endured even as a growing body of human rights law made states’ treatment of individual human beings a matter of international concern.”

Germany v. Philipp is a case involving a collection of medieval Christian art known as the “Welfenschatz” (or, in English, the “Guelph Treasure”).

In 1933, Nazi officials forced Jewish art dealers to sell the Welfenschatz to the Nazi-controlled state of Prussia, a transaction in which Hitler himself had some involvement. The heirs of those dealers, some of whom are American citizens, sued Germany to reclaim the collection, which is currently in a Berlin museum, and is reported to be worth $250 million. Heirs of Holocaust victims contended that the forced sale of the Welfenschatz was an act of genocide (not a mere domestic taking) and, therefore, violated international law in a manner that U.S. courts have the authority remedy through an exception to the FSIA.

The Hungary v. Simon case involves 14 Holocaust survivors, four of whom are naturalized American citizens. They attempted to sue the Hungarian government and a railroad (which, at the time in question, was government-owned) for participating in shipping Jewish people to death camps. The lawsuit sought damages for confiscation of basic personal property (clothing, shelter, medicine, and more) by the government.

But the high court held that the text of the FSIA’s expropriation exception supported Germany’s argument by what it said (and by what it did not say about genocide).

“The exception places repeated emphasis on property and property-related rights, while injuries and acts associated with violations of human rights law, such as genocide, are notably lacking—a remarkable omission if the provision was intended to provide relief for atrocities such as the Holocaust,” the court said. “A statutory phrase concerning property rights most sensibly references the international law governing property rights, rather than the law of genocide.”

Attorney Nicholas O’Donnell of Sullivan & Worcester LLP said his clients, the heirs of Jewish art dealers who were forced to sell the Welfenschatz, are “obviously disappointed in the Court’s ruling.”

“We are considering our next steps for when the case returns to the District Court,” O’Donnell told Law&Crime.

Paul Gaston, attorney for the victims in the Hungary v. Simon case, similarly said in a statement that the legal team is examining its options for when the case is kicked back down to the lower court.

“Our legal team is still studying the decision in the Phillipp case, but believe that decision leaves plenty of room for plaintiffs in Simon v. Hungary to prevail on remand,” Gaston said.

Both the Germany v. Philipp and Hungary v. Simon cases were previously approved by the U.S. Court of Appeals for the D.C. Circuit in 2018 on the basis that their connection to the Holocaust created sufficient grounds to allow the cases to proceed under the FSIA. SCOTUS said that analysis was incorrect.

In Germany v. Philipp on Wednesday, SCOTUS vacated the judgment of the appeals court and kicked the case back down for “further proceedings consistent with this opinion.” The court did the same in Hungary v. Simon, but only referred to the Germany v. Philipp decision when doing so; there was no 16-page opinion of the court, only a one-paragraph per curiam opinion and order.

As Law&Crime previously reported, the justices seemed skeptical in Dec. 2020 that the U.S. judiciary could bring justice to Holocaust victims and their heirs in these cases.