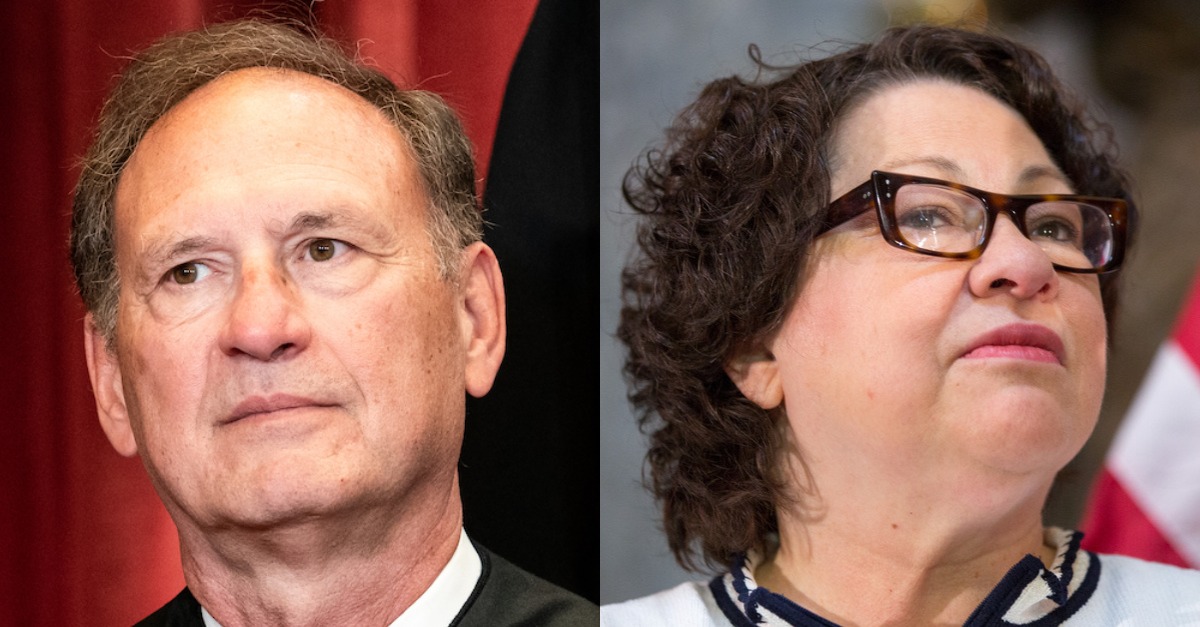 The 8-1 ruling in the case stylized as Cameron v. EMW Women’s Surgical Center was penned by Justice Samuel Alito. Two separate concurrences were penned by Justice Clarence Thomas, who would have gone even farther than the majority, and Justice Elena Kagan, who was joined by Stephen Breyer. Kagan wrote separately to say she agreed with the result but would have gotten there a slightly different way. Justice Sonia Sotomayor was, as is often the case, the lone dissent.

In ruling for Cameron, the court did not address the merits of Kentucky House Bill 454. The controversial anti-abortion law was passed by the state legislature and then signed into law by a former Republican governor in 2018 and bans the use of a common abortion surgery known as dilation and evacuation after the 11th week of pregnancy, “except in the case of a medical emergency.”

Instead, the nine justices were asked to determine whether the current state of long-running litigation against HB 454, brought by a health clinic, precludes the state’s relatively new attorney general from attempting to revive the ban as a state party who can defend the law after the previous attorney general declined to do so. Notably, the abortion ban itself is currently enjoined as the U.S. Court of Appeals for the Sixth Circuit deals with the proceedings.

Previously, Cameron asked the full Sixth Circuit to rehear the case after a three-judge panel struck down the law. The appeals court declined to do so on the basis that the attorney general’s motion to intervene on behalf of the state came too late in the process.

But it’s not quite as simple as that.

Previously, the Kentucky Secretary of Health and Family Services was defending the law in federal court. That didn’t change when pro-choice Gov. Beshear took over from the previous GOP governor – at least not at first. The new, Democratic Party-affiliated, health secretary initially defended the abortion ban with Cameron as their counsel. When the Sixth Circuit ruled in favor of the health clinic, however, the health secretary dropped their defense of the law.

After that, Cameron stopped representing the state’s health secretary and moved to intervene as his own party. But that’s not the end of the story here either — due to yet another wrinkle in procedural terms.

Beshear himself was previously the attorney general and was initially sued. His office, though, with the health clinic’s assent, removed itself from the litigation with a signed stipulation that agreed to be bound by the final judgment at the district court level.

Since the health clinic won in the district court, they and their allies argued, Cameron’s office simply could not intervene.

Alito’s majority opinion throws away all those obstacles in turn.

“In agreeing to be bound, the attorney general specifically ‘reserve[d] all rights, claims, and defenses . . . in any appeals arising out of this action,’  and this language easily covers the right to seek rehearing en banc and the right to file a petition for a writ of certiorari,” the justice writes. “In addition, the stipulation of dismissal made clear that the judgment to which the attorney general agreed to be bound was the judgment that emerged after all appellate review concluded.”

The majority upbraids the Sixth Circuit for, essentially, limiting its own jurisdiction in a faulty manner.

“Resolution of a motion for permissive intervention is committed to the discretion of the court before which intervention is sought,” Alito goes on. “But a court fails to exercise its discretion soundly when it ‘base[s] its ruling on an erroneous view of the law,’ and that is what happened here. The Sixth Circuit panel failed to account for the strength of the Kentucky attorney general’s interest in taking up the defense of HB 454 when the secretary for Health and Family Services elected to acquiesce.”

The majority also chides the appeals court for how they understood and applied issue of timeliness in a motion to intervene.

To hear the lower court tell it, Cameron’s intervention was not timely because he only moved to be included after years of litigation at the district court level and then, finally, when the Sixth Circuit issued their own opinion striking down the abortion ban.

Alito focuses on this at length:

Timeliness is an important consideration in deciding whether intervention should be allowed, but “[t]imeliness is to be determined from all the circumstances,” and “the point to which [a] suit has progressed is . . . not solely dispositive.”

Here, the most important circumstance relating to timeliness is that the attorney general sought to intervene “as soon as it became clear” that the Commonwealth’s interests “would no longer be protected” by the parties in the case.

“The motion was also filed within a week after the Sixth Circuit issued its decision and within the 14-day time limit for petitioning for rehearing en banc,” the majority notes. “Although the litigation by that time had proceeded for years, that factor is not dispositive. The attorney general’s need to seek intervention did not arise until the secretary ceased defending the state law, and the timeliness of his motion should be assessed in relation to that point in time.”

In dissent, Justice Sonia Sotomayor initially frames her opposition to the majority opinion by citing case law that says there must be “point of time when litigation shall be at an end.”

But the heart of her dissent is not really about timing at all.

Rather, Sotomayor rejects framing the case as a question of “whether a state attorney general may intervene, after a federal court of appeals already has rendered its judgment, for the purpose of defending a state law where no other state actor will do so.” Instead, she argues, Cameron’s version of the Kentucky attorney general’s office should be bound by the Beshear version’s stipulation that bound the office to the district court judgment in the case.

“[T]his is not the first time a governmental office has changed hands in the middle of a protracted lawsuit, and it certainly will not be the last,” Sotomayor writes. “Elections have consequences not just for the public but also for state officers who may find themselves bound by strategic litigation choices made by their predecessors in office. Shifts in the political winds do not support a special carveout to longstanding principles of estoppel. Rules that protect reliance and finality exist for good reason: Courts, litigants, and the public must be able to trust representations made in court.”