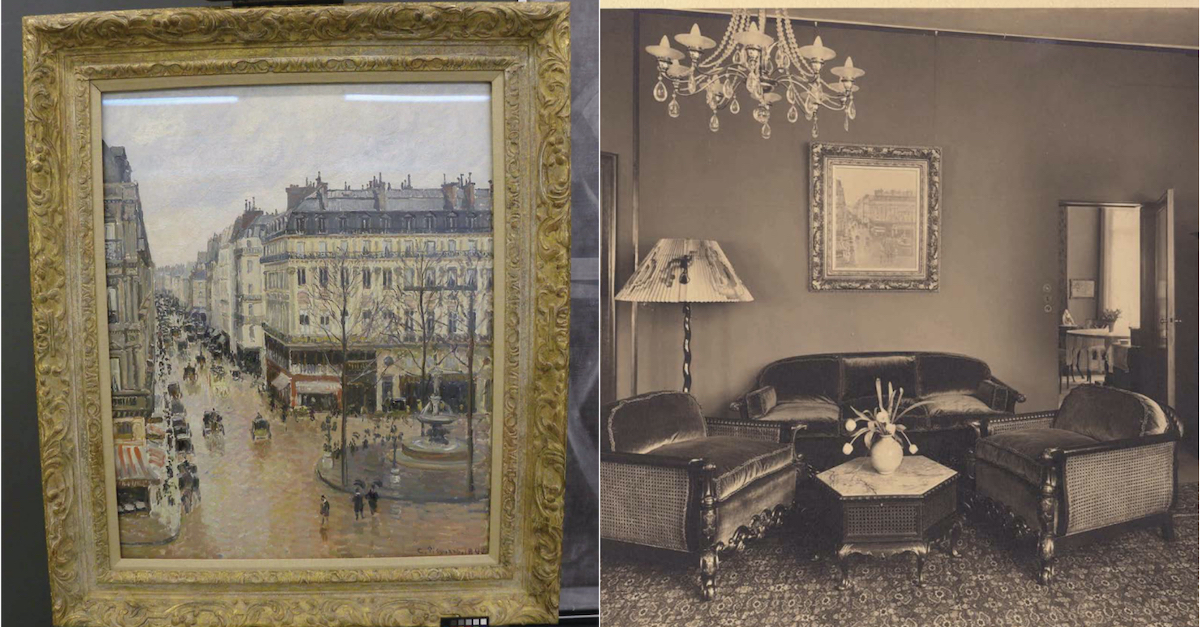 On the right, Camille Pissarro’s “Rue Saint-Honoré, Afternoon, Rain Effect” hangs in the parlor of the family from whom the Nazis looted the impressionist masterwork.

The decades-long fight of a Holocaust survivor’s family to recover a Nazi-looted impressionist masterpiece notched them a Supreme Court victory on Thursday, when the high court unanimously found that California law applies to their restitution claims.

“Although the legal issue before us is prosaic, the case’s subject matter and background are anything but,” Justice Elena Kagan, who is Jewish, wrote for the court. “At issue is the ownership of an Impressionist painting depicting a Paris streetscape: Camille Pissarro’s Rue Saint-Honoré in the Afternoon, Effect of Rain.”

In 1900, the impressionist master’s agent Paul Durand-Ruel sold the painting to Paul Cassirer, a member of a prominent German-Jewish family.

“Lilly inherited the painting in 1926 and displayed it prominently in her parlor, where her grandson, Claude Cassirer, the original plaintiff in this case, played as a child,” the family’s attorney David Boies wrote in a petition for Supreme Court review.

The Supreme Court included a photograph of the painting hanging in Lilly Cassirer’s parlor in the appendix of that ruling, showing its placement before she was forced to surrender it to the Nazis.

“The underlying question in this case—which this opinion will not resolve—is whether the Cassirer family can get the painting back,” Kagan wrote.

Indeed, the Cassirer heirs must still litigate over whether they can win the return of the $40 million painting from Madrid’s Thyssen-Bornemisza Museum, where it is currently located. The circuitous path through which Rue Saint-Honoré arrived there involved a German steel scion named Baron Hans Heinrich von Thyssen-Bornemisza, who bought it on consignment in 1976. The baron established the Thyssen-Bornemisza Collection Foundation roughly a quarter of a century later in 1993, selling the Pissarro and other works to the foundation behind the museum. Claude Cassirer said he recognized the Pissarro as the one in the Thyssen’s collection by the “haunting black and white photo of the painting hanging over the sofa in Lilly’s parlor,” notifying the Spanish government in 2001.

After decades of diplomacy and litigation, the Supreme Court considered, as Kagan put it, a rather “prosaic” issue over whether Spanish or California law applied to the fight. The family’s lawsuit lives on because the high court resolved that question in favor of California law.

“We are obviously pleased,” Boies, representing the family for the firm Boies Schiller Flexner, told Law&Crime in a statement. “It is a great day for the Cassirer family and for all who care about justice.”

“We’re grateful the Supreme Court corrected the legal error of the lower courts, and look forward to resuming litigation to secure the return of this Cassirer family treasure,” Boies Schiller partner Scott Gant, a co-counsel in the case, added. “I hope the Foundation and Spain will reflect and conclude it should return the painting rather than maintain its longstanding refusal to do what is just.”

A lawyer for the Spanish government did not immediately respond to an email requesting comment.