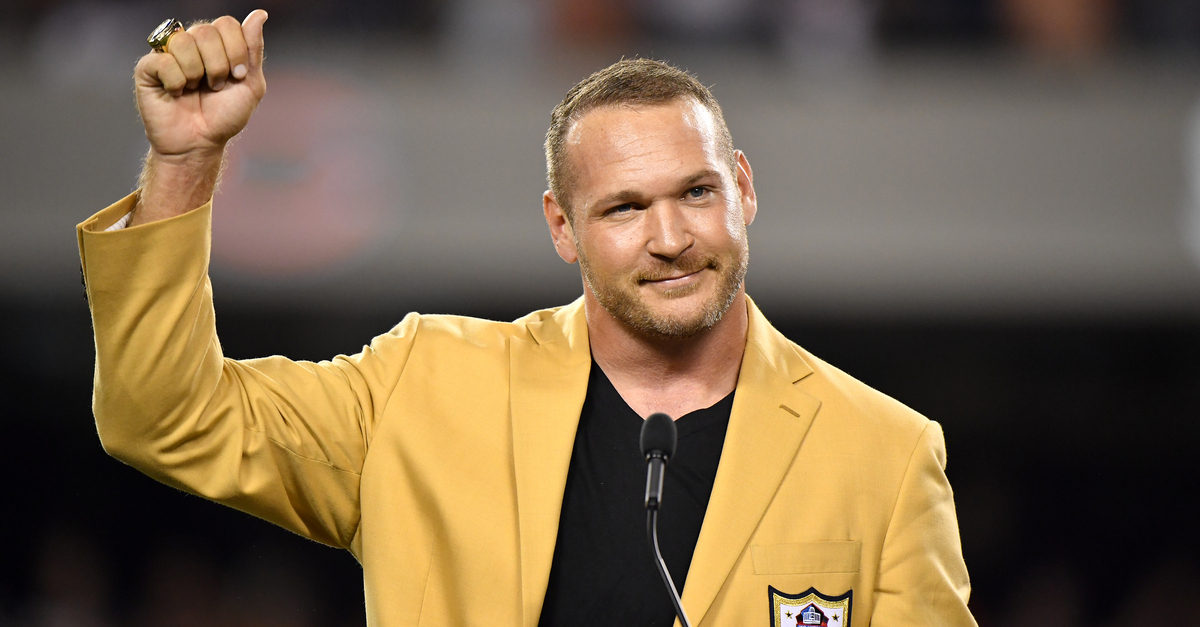 Brian Urlacher is honored with a Ring of Excellence ceremony for his recent induction into the Hall of Fame at Soldier Field on September 17, 2018 in Chicago, Illinois.

Brian Urlacher is a first ballot Pro Football Hall of Famer and a veritable NFL legend. In fact, he’s such an institution in the world of Chicago Bears aficionados that one could imagine easily imagine an extended monologue about the decorated lifelong Chi-town linebacker from Bill Swerski and his mustachioed superfans.

On Monday, Urlacher raised eyebrows instead of brews by meeting with President Donald Trump–immediately prompting speculation that another high-profile presidential pardon was being glad-handed into existence inside of a celebrity friendly White House.

President Trump did not speak to reporters as he arrived back at the White House just now, but he did invite the large man in the blue suit, who we believe to be Brian Urlacher of Chicago Bears fame, into the WH residence with him. pic.twitter.com/UEPKYPkbql

Casey Urlacher currently serves as the mayor of the tiny town of Mettawa (pop. 547) and he unsuccessfully ran for State Senate in Illinois as a Republican in 2016–losing a three-way race by substantial margins.

He was indicted by the U.S. Attorney’s Office for the Northern District of Illinois in February on charges of running an offshore gambling ring–along with nine other people including a veteran of the Chicago Police Department. According to the 28-page federal indictment, the gambling ring was run by a 54-year-old man who went by the nickname “Uncle Mick.”

Mayor Urlacher pleaded not guilty to those charges last Wednesday at a federal court.

He is personally accused of recruiting marks in exchange for any of the losses they would eventually–and inevitably–incur.

According to the indictment, the operation took place online by way of the website www.unclemicksports.com. The indicted “agents” of the gambling operation allegedly coordinated with one another via encrypted messaging, the indictment notes.

Despite the minor inconvenience, the current mayor and former non-NFL pro football player is staying on as mayor of his little village as he combats the federal charges. He was originally elected in 2013 and re-elected four years later.

“I’ll get my personal issues out of the way,” Urlacher told his colleagues just after being indicted.

“I fully believe that I will be exonerated of all of the charges,” Urlacher said. “I will continue to faithfully serve the village as I have over the past seven years and we will continue on the path of progress that we have made in Mettawa during my tenure.”

As far as forward progress goes, however, it looks like the other Urlacher may be making a substantial play.

“If Brian Urlacher is going to talk to Trump about a pardon for his brother, good on him,” noted one Twitter user. “Not a Trump guy but I’d do the exact same thing for a loved one.”