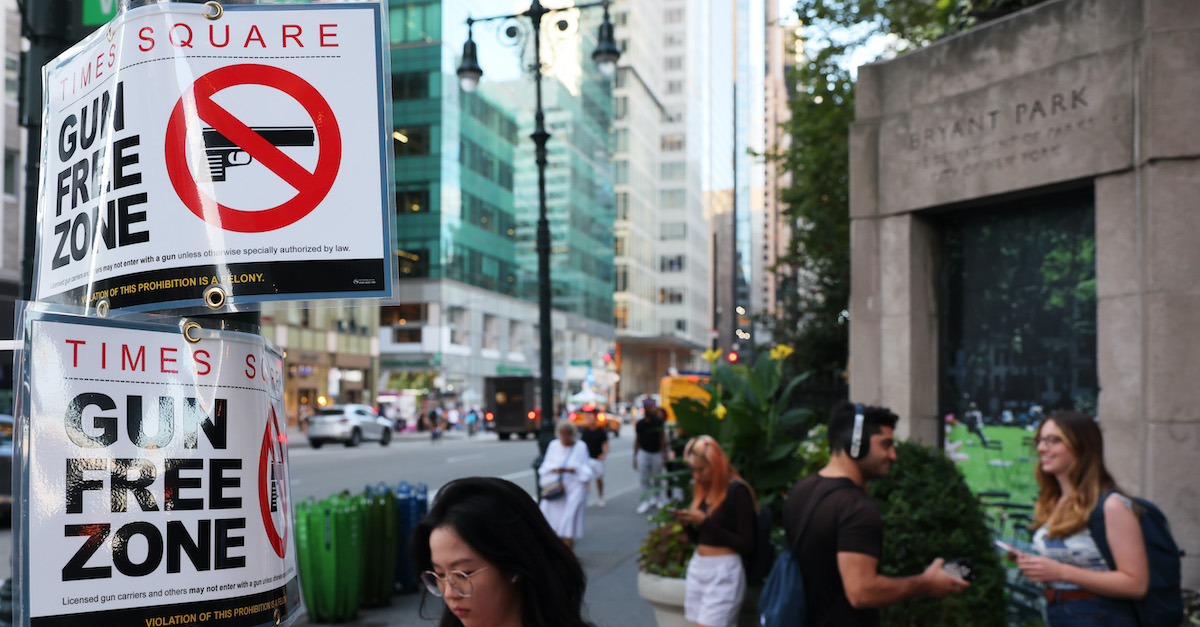 The 2022 statute was the result of the state legislature’s emergency session which immediately followed the Supreme Court’s ruling in Bruen. The case had been a successful challenge to New York’s century-old handgun licensing regime. Justice Clarence Thomas wrote in the Court’s opinion that the statute was an unconstitutional violation of the Second Amendment that unduly interfered with New Yorkers’ “special need for self-defense.”

Thomas also noted in his opinion that gun laws must be “consistent with this Nation’s historical tradition of firearm regulation.”

New York’s legislative response to the Bruen ruling made it a felony to possess a gun in “sensitive areas” — such as museums, stadiums, public transit systems, parks, Times Square and houses of worship — as well as “restricted areas,” such as private property. The CCIA also added training requirements for concealed-carry permits, as well as a mandated written exam, in-person screening, and a review of social media accounts to ensure a licensee’s “good moral character” before licensing

After it was passed, the CCIA came under immediate attack by gun activists in multiple lawsuits.

In one such case, U.S. District Judge Glenn T. Suddaby, a George W. Bush appointee, temporarily blocked the “sensitive places” and “good moral character” portions of the law on the grounds that analogous regulations did not exist in the 18th and 19th century. James successfully appealed that ruling.

A three-judge panel of U.S. Court of Appeals for the Second Circuit next ruled unanimously to stay Suddaby’s order pending the outcome of New York’s appeal and ordered expedited consideration of the case with a Jan. 9, 2023, deadline for briefs.

The panel, which consisted of Circuit Judges Robert D. Sack, a Bill Clinton appointee; Richard C. Wesley, a George W. Bush appointee; and Joseph F. Bianco, a Donald Trump appointee, is the same trio that stayed another district court order in a separate challenge to the CCIA in December.

The gun owners responded with an emergency petition to the Supreme Court on Dec. 21, 2022, in which they asked the justices to keep the district court ruling in effect while the underlying challenge to the CCIA works its way through the appeal.

In a 43-page responsive brief, James urges the justices to refrain from taking the “extraordinary step” of vacating a circuit court order. In particular, James pointed to the timing of the question before the high court.

“This Court ordinarily awaits percolation of legal issues in the lower courts before granting review and would benefit from such percolation here,” the AG’s brief states.

Arguing that the CCIA was crafted with the Court’s Bruen ruling in mind, James quoted Justice Brett Kavanaugh‘s concurrence in support of the Empire State’s position.

“Bruen cautioned that its standard was not intended to be a ‘regulatory straightjacket,'” James reminded the justices, quoting Kavanaugh’s words.  On the issue of the now oft-quoted Thomas standard, “this Nation’s historical tradition of firearm regulation,” James again raised Kavanaugh’s comments: “governments were not required to identify ‘historical twin[s]’ or ‘dead ringer[s]’ to support modern regulations.”

The argument pits Thomas’s demands from the Court’s majority opinion against Kavanaugh’s assurances in his concurrence. Potentially, the justices could use the case to tease out nuances in the Court’s Second Amendment jurisprudence. Perhaps more likely, however, the potential for conflict could be a factor that dissuades the justices from reviewing the Second Circuit’s ruling at all.

James’ brief also called Suddaby’s underlying analysis “deeply flawed,” particularly on the issue of standing. James argued that the district judge was wrong to allow a person who had never applied for a carry license to challenge the carry-licensing law and to allow a church drug counselor to challenge prohibitions on guns in drug-treatment clinics.

What’s more, New York argues, Suddaby got the history wrong by relying on the plaintiffs’ “invented metrics of relevancy and representativeness, speculative hypotheticals, and an improper demand that respondents identify examples of historical regulations that are both numerous and identical to the challenged provisions of the CCIA.”

In addition to the substantive errors, New York’s petition also makes several procedural arguments against a Supreme Court reversal of the Second Circuit’s stay. It argues that it is the wrong time for the justices to involve themselves given that the case is still at an intermediate stage. Moreover, it says, Suddaby’s stay “was necessary to prevent regulatory chaos and public confusion,” which was created by multiple legal challenges to the same statute proceeding at the same time.

The Supreme Court ruled 6-3 in the Bruen case with Chief Justice John Roberts and Justices Samuel Alito, Neil Gorsuch, Brett Kavanaugh, and Amy Coney Barrett all joining Thomas’ opinion. Roberts also joined Kavanaugh’s concurrence. In dissent stood Justices Stephen Breyer, Sonia Sotomayor, and Elena Kagan. As the justice designated for the Second Circuit, Sotomayor is the justice before whom the emergency application will proceed; the justice could rule on or reject the matter unilaterally, or could refer it to the full Court.