9/11 Families’ Attorney: ‘Third Man’ Who Helped Flight 77 Hijackers Has ‘Name We Were Familiar With’

Of the 19 Al-Qaeda hijackers who perpetrated the 9/11 attacks that stole the lives of 2,977 people, five of them were on the American Airlines Flight 77 plane that crashed into the Pentagon. Two of those terrorists were Nawaf al-Hazmi and Khalid al-Mihdhar, and they were helped by a “third man” whose identity has remained secret to this day. On Thursday, however, U.S. Attorney General William Barr’s Department of Justice and the FBI agreed to hand over the name of the unnamed individual only to attorneys representing 9/11 families in a lawsuit against the Kingdom of Saudi Arabia, a lawsuit alleging Saudi Arabia helped coordinate the attacks.

The catch? That name is being released to the attorneys pursuant to FBI protective order, meaning it cannot be disclosed publicly. One of the lead lawyers on the case, Andrew Maloney, joined the Law&Crime Network’s Brian Ross Investigates for a Thursday interview.

Maloney told Brian Ross that he was not at liberty to reveal the name — not even to his own clients. When asked if the name came as a surprise, Maloney said, “No.”

“It was a name we were familiar with,” Maloney said. You can watch more of that interview in the player above.

The key part of the Southern District of New York’s memorandum of law in “partial opposition to compel production of certain information in the 2012 FBI summary report”:

Upon further consideration, and in consultation with the Attorney General, the FBI has exercised its discretion, under section 3.1(d) of Executive Order 13,526, to declassify limited information in the 2012 Summary Report, specifically, the name of the third main subject of investigation. The September 11 terrorist attacks were the most lethal in our nation’s history, and the FBI has long been committed to providing the families of the victims with transparency regarding its investigation of the events of that tragic day, consistent with maintaining the national security and the FBI’s overriding goal of preventing future terrorist attacks. Thus, under the exceptional circumstances of this case, the name of the third main subject has been declassified and is being released to counsel pursuant to the FBI Protective Order. McGarrity Decl. ¶ 14; see Supp. Normand Decl., Exh. K.2 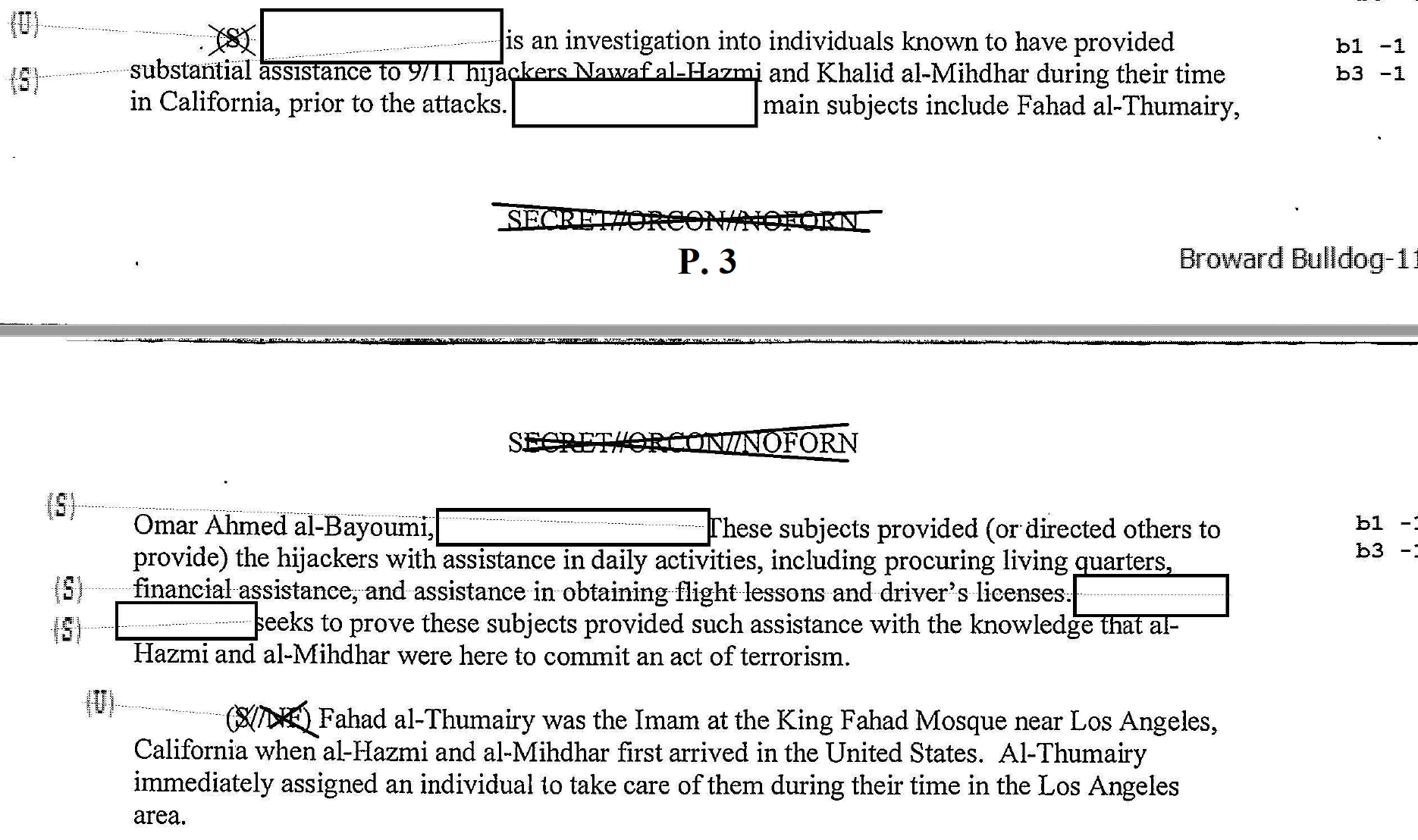 Barr, for his part, appeared to raise more questions about this person’s identity and connection to the Saudi government, when declining to reveal the “third man’s” identity on national security grounds.

You can read the Barr declaration and the memorandum of law below.