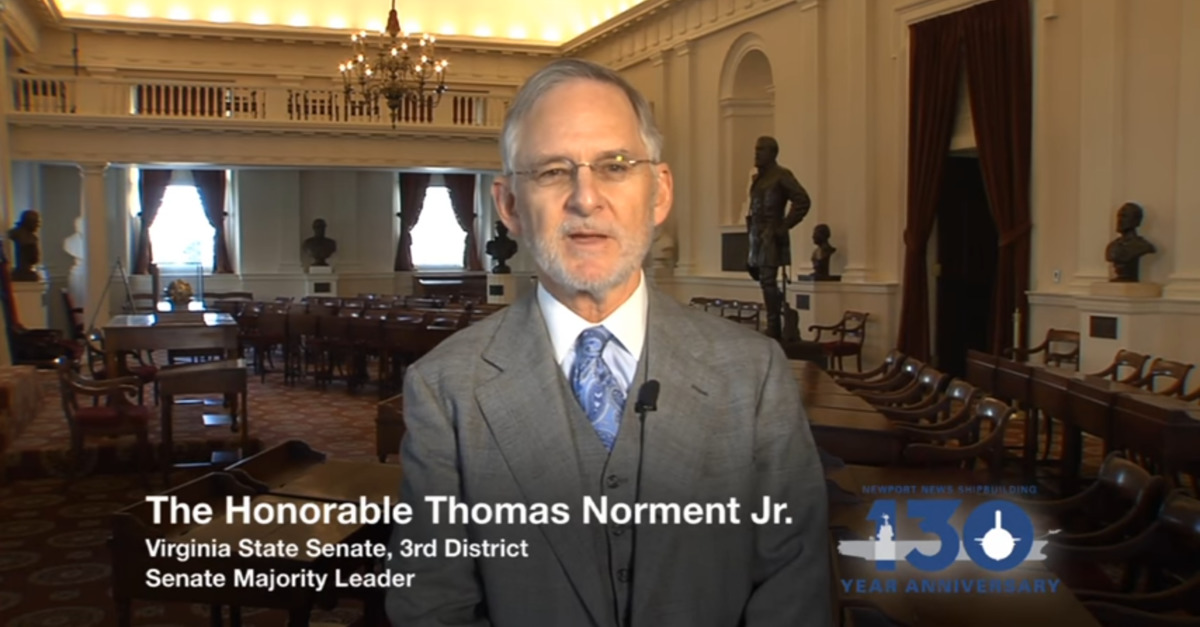 Virginia Republican and Senate Majority Leader Tommy Norment was recently ensnared in the commonwealth’s ongoing blackface scandal after it was revealed that he edited a racist yearbook containing multiple racial slurs and photographs of men in blackface while at the Virginia Military Institute (VMI).

New information from Norment’s former students suggests his time courting controversy is far from over.

According to liberal outlet ThinkProgress, students who attended Norment’s course at the College of William & Mary recall a professor who “routinely made racially insensitive and transphobic comments [and who] forced students of color to defend Confederate iconography.”

Greg Akerman graduated from William & Mary in 2018. He first drew attention to Norment’s controversial course on Twitter in the context of the Republican’s editorial oversight of VMI’s racist yearbook.

“Sen. Norment taught a once-a-week Senimar at my college that I took my junior year,” Akerman wrote. “One class, he spent 20 minutes fondly remembering how a fraternity on campus dressed as confederates and chained a student in blackface to a tree for the Homecoming Parade.”

“I assumed it was kind of an open secret,” Akerman told the outlet. “I got the sense that he wasn’t very in touch on race issues.”

A Fall 2016 syllabus for Norment’s course outlines a group debate project surrounding William & Mary’s–as well as Virginia’s–efforts to eradicate paeans to its Confederate past such as Confederate flag license plates, a Confederate symbol on the school’s ceremonial mace, and a plaque commemorating Confederate soldiers.

The “ISSUES” section of this assignment asks:

1)Should the Governor have revoked the Confederate flag license plate through “Executive ORder”; or ignored the sense of the General Assembly which enacted the law in the first place?
2)Is the College “sanitizing” both American and the College’s history?
3) Did the innocuous plaque and ring on the Mace really offend our community and make them feel unwelcome, or was it just a cause du jure?
4)Is the removal of the plaque and ring on the Mace being deferential to a very small minority to the exclusion of the majority?
5) Is the college being too “PC” (politically correct)?
6)Should Virginia close Virginia Military Institute, which is steeped in Civil War tradition with a statute of Thomas “Stonewall” Jackson; a monument to the Battle of New Market; a chapel named after Robert E. Lee and his horse Traveler stuffed in a museum?

A Fall 2017 syllabus from the same course adds a seventh question which asks, “Have the recent events in Charlottesville changed any of these issues?”

An anonymous student who spoke to ThinkProgress said that Norment was likely to take the side of students who argued in favor of keeping the Confederate monuments and tributes in place.

“Sen. Norment held out his VMI ring which has an emblem of the Confederate flag on it and asked the [student] speaker, who was arguing for removal, ‘Are you offended?’ repeatedly,” the student claimed.

Another unnamed student said that Norment once said, “there are no Native American students at William & Mary.” Norment was then allegedly corrected by the president of the university’s American Indian Student Association–who was said to be taking his class at the time.

“[Norment] used the phrase ‘There is some girl who thinks she’s a boy in Gloucester County who’s mad she can’t use the boy’s restroom.'”

Law&Crime reached out to Jeff Ryer, press secretary for the Virginia Senate Republican Caucus, for comment on this article. Ryer refused to comment and then hung up the phone.