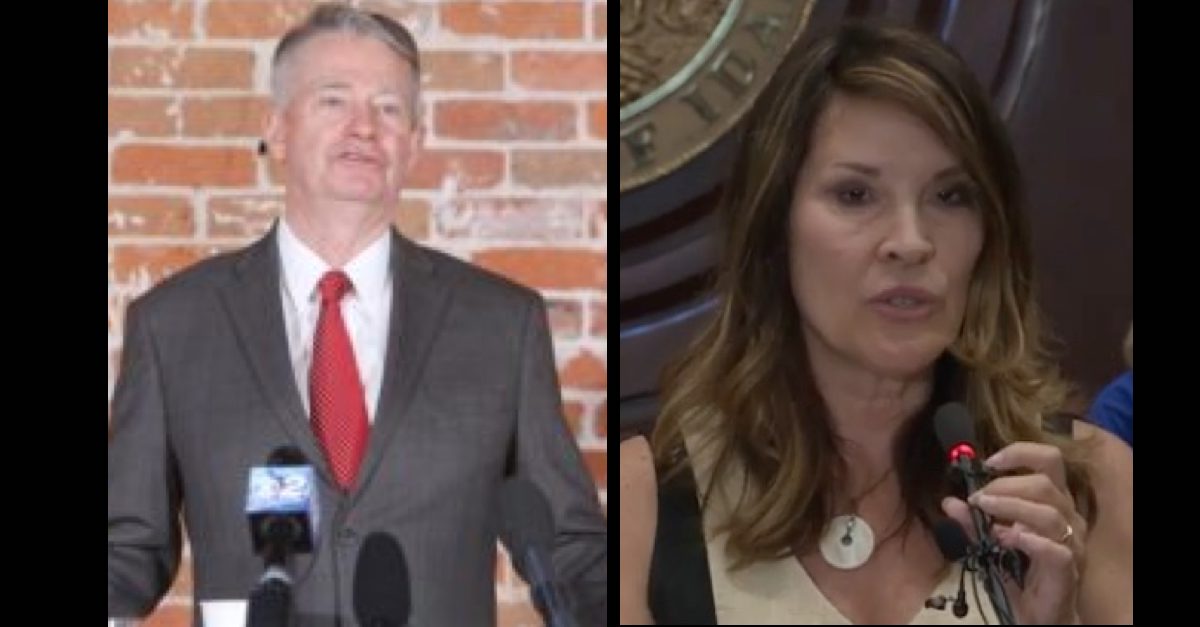 The issues? The conservative calling cards of mask mandates and illegal immigration.

Their weapons? Executive orders and an attempt to deploy the National Guard.

Idaho’s Constitution says that when the governor is out of the state — a seemingly benign situation listed between the more serious conditions of “resignation” and “inability to discharge the powers and duties of his office” — the lieutenant governor is “to act as governor.”

So when Republican Gov. Brad Little announced Monday that he would travel to Texas to “witness firsthand the crisis playing out” along the border with Mexico, Lt. Gov. Janice McGeachin, also a Republican, wasted no time in issuing an Executive Order relating to so-called “vaccine passports.”

“Today, as Acting Governor, I fixed Gov. Little’s Executive Order on ‘vaccine passports’ to make sure that K-12 schools and universities cannot require vaccinations OR require mandatory testing,” McGeachin said on Twitter, with a picture of her executive order signed on Tuesday. “I will continue to fight for your individual Liberty!”

Today, as Acting Governor, I fixed Gov. Little’s Executive Order on “vaccine passports” to make sure that K-12 schools and universities cannot require vaccinations OR require mandatory testing. I will continue to fight for your individual Liberty! #idpol pic.twitter.com/Jz87jfZaWc

Little, for his part, wasted no time in responding to McGeachin’s order, posting his disapproval on Twitter not ten minutes later.

I will be rescinding and reversing any actions taken by the Lt. Governor when I return. pic.twitter.com/iBuQqX1R5i

“I will be rescinding and reversing any actions taken by the Lt. Governor when I return,” Little wrote.

McGeachin’s Oct. 5 order expanded that prohibition to all public schools, colleges, and universities in the state.

A similar conflict played out in May when Little left the state for a conference of the Republican Governors Association.

In Little’s absence, McGeachin issued an executive order barring all local officials and public schools in the state from requiring masks. Little, who had never issued a statewide mask mandate, wanted to allow local officials room to “take measures they believe will protect the health and safety of the people they serve.”

Little rescinded McGeachin’s order upon his return with an order of his own that included particularly pointed language: “[McGeachin’s order] violates fundamental principles of conservatism by forcing the heavy hand of government on local jurisdictions that are better suited to make unique decisions directly affecting the health and safety of their populations,” the governor’s order said.

Nevertheless, McGeachin has persisted, and in this latest round, she appears to have had intentions beyond expanding Little’s rules about mask mandates.

According to an Associated Press report on Wednesday, McGeachin asked about deploying the state’s National Guard to the U.S.-Mexico border.

“As of Wednesday, my constitutional authority as Governor affords me the power of activating the Idaho National Guard,” McGeachin wrote to Major General Michael Garshak. “As the Adjutant General, I am requesting information from you on the steps needed for the Governor to activate the National Guard.”

Garshak’s response, according to the AP, was just one paragraph long: “I am unaware of any request for Idaho National Guard assistance under the Emergency Management Assistance Compact (EMAC) from Texas or Arizona . . . As you are aware, the Idaho National Guard is not a law enforcement agency.”

“Attempting to deploy our National Guard for political grandstanding is an affront to the Idaho constitution and insults the men and women who have dedicated their life to serving our state and the country,” Little said in a statement, the AP reported.

A representative from Little’s office told Law&Crime that the governor plans to return to Idaho on Wednesday evening, and does not plan to cut his trip short in response to McGeachin’s actions.

“Governor Little is visiting the border because the growing drug threat in Idaho is a direct result of the current policies of the Biden Administration, and he is joining other governors in unveiling their proposed solutions to the crisis since the president and Congress won’t address it,” Little’s office said when asked why the governor chose to leave Idaho, which currently ranks second in the nation in per capita deaths from the novel coronavirus, to focus on the southern border.

McGeachin’s moves can easily been seen as political maneuvering, as she announced in May that she will run for governor in 2022.

A Politico report in June, which described McGeachin’s actions against Little as a “mutiny,” laid out the political differences between the two: “Little hails from an older establishment line of Idaho Republicans. McGeachin, by contrast, flourished as a new tea party conservative and gained more influence with the rise of Trump-era conservative populism, which went into overdrive during the pandemic.”

Editor’s note: This story was updated with comments from Gov. Little’s office.