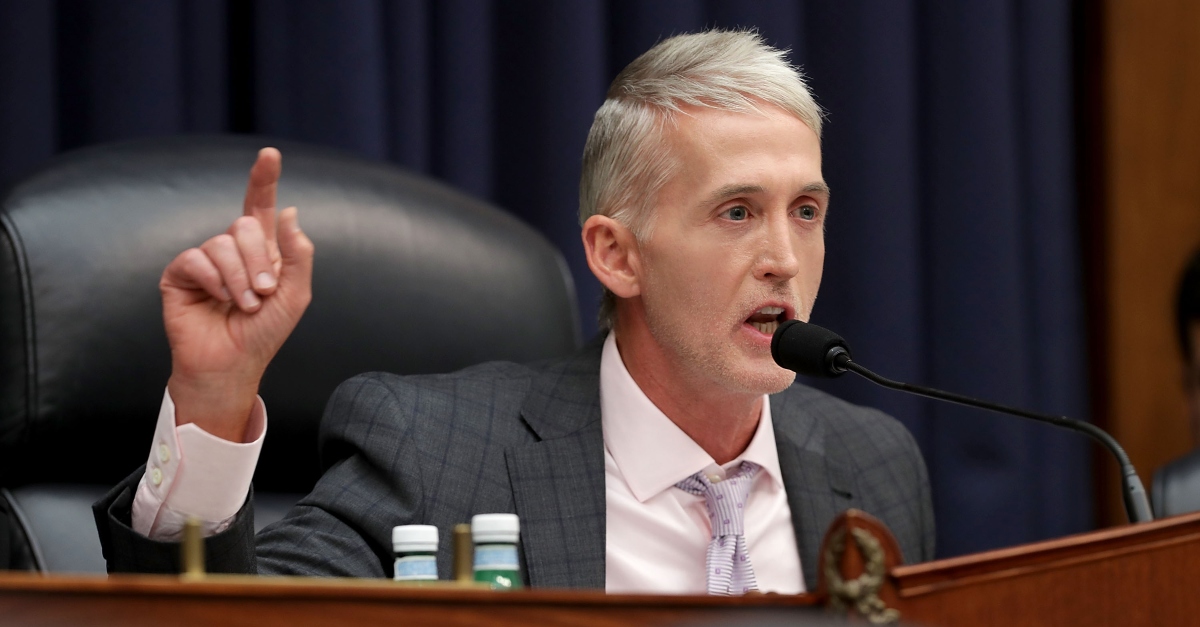 Former Congressman Trey Gowdy‘s possible status as a member of President Donald Trump‘s outside legal team has been a roller-coaster. As things stand, it’s not going to happen, according to The New York Times. The plan fell apart in the face of his law firm’s worries that his Trump work would involve lobbying. After all, the former representative is banned from lobbying until January 2020. Two people familiar with the situation said he’s never expected to join the response to Congress’ impeachment inquiry.

Gowdy retired from politics, serving out his final term into last January.

Some aides reportedly blamed acting White House chief of staff Mick Mulvaney for the fumble. He had worked to get Gowdy hired, but dismissed concerns that lobbying regulations would get in the way of this, according to the article. Both of them reportedly said it wouldn’t be an issue.

Also making an appearance in this story is former acting White House counsel Emmet T. Flood, the lawyer who helped them face the Mueller investigation. Officials wanted to know if he could help them out in the impeachment inquiry.

“He was not available,” according to the report.

I would say Trump needs at least five Emmet Floods right about now. He isn’t going to get them. https://t.co/8OxYBe1ctn pic.twitter.com/VBRZJWAwB0

Calls for Trump’s impeachment are older than his presidency, but the tipping point into inquiry was his asking Ukrainian President Volodymyr Zelensky to have former U.S. Vice President Joe Biden, and the ex-VP’s son Hunter Biden investigated.  The president has denied wrongdoing.

Somebody please explain to Chris Wallace of Fox, who will never be his father (and my friend), Mike Wallace, that the Phone Conversation I had with the President of Ukraine was a congenial & good one. It was only Schiff’s made up version of that conversation that was bad!