Is Electoral College Open to Interpretation By Courts? | Law & Crime

ABA Legal Fact Check: Constitution Silent on How Much Control States Have over Electoral College 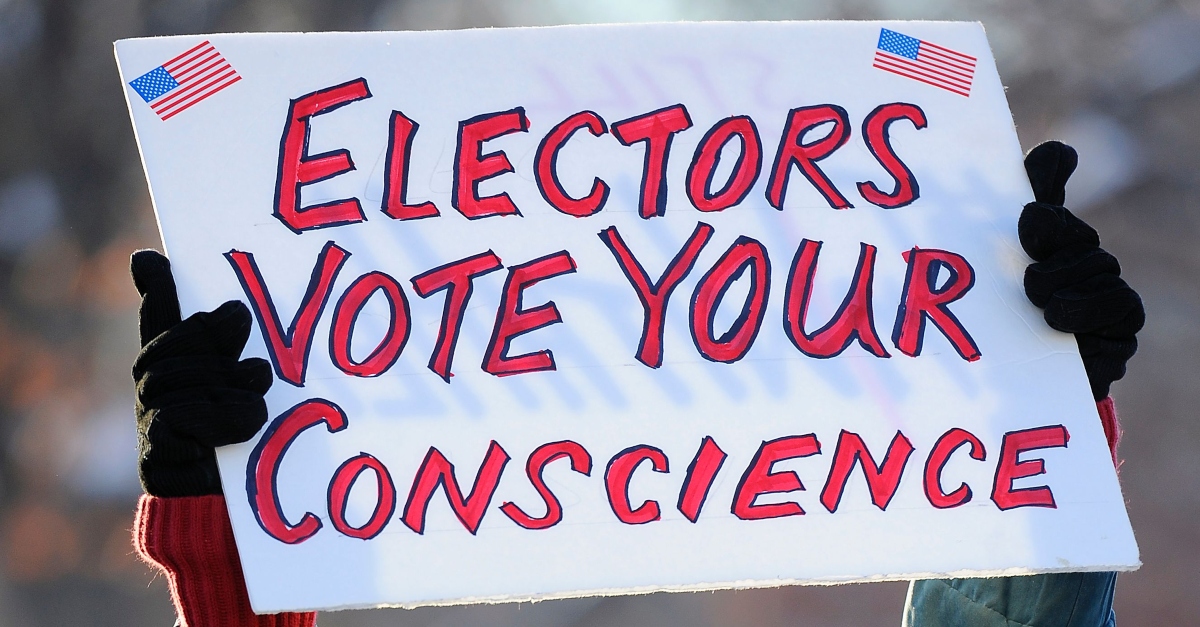 This spring, numerous candidates for president expressed support for either abolishing or changing the Electoral College, which ultimately picks the U.S. president. The National Archives reports that over the past 200 years more than 700 proposals have been introduced in Congress to reform or eliminate the Electoral College – without any becoming law.

The basis for the Electoral College is found in Article II, Section 1 of the Constitution, which spells out how the president shall be chosen. It gives each state “in such manner as the legislature thereof may direct” electors equal to its representation in Congress. The Constitution originally stipulated that the top vote-getter chosen by these electors would become president and the individual with the second-most votes would be vice president.

But after the presidential election in 1800 resulted in an acrimonious tie vote between Thomas Jefferson and Aaron Burr, the 12th Amendment was ratified in 1804. It provides for separate votes for president and vice president and specified that those individuals must be from different states.

In the ensuing 215 years, the Electoral College system itself has changed little, although the popular vote has been rightfully guaranteed to millions more previously denied on the basis of race, gender and age. The presidential election is held every four years on the Tuesday after the first Monday in November. In each state, electors meet after the presidential election on the first Monday after the second Wednesday in December and cast their votes for president and vice president in separate ballots.

Most states have a “winner-take-all” system that awards all the votes of a state’s electors to the presidential candidate who obtains the most votes in that state. Maine and Nebraska, however, have enacted the congressional district method, which allocates one electoral vote to the winner of the popular vote in each state-drawn district. A split of electoral votes has occurred once in each of these states.

Research by the National Association of Secretaries of State shows that 29 states and the District of Columbia require presidential electors, chosen through political party processes in each state, to cast their vote for the candidate they were selected by popular vote in that state to represent. But specifics vary. Some laws simply state that electors must vote for the candidate of the party they represent; others require electors to sign an oath or a pledge. A few states provide criminal penalties if an elector violates the requirement. In winner-take-all states, all electoral votes cast for the state are assigned to the candidate who gets the most electoral votes.

The Constitution is silent on whether states or the electors themselves ultimately can decide which candidate gets the electors’ vote, and the U.S. Supreme Court has not addressed that issue in the handful of cases it has considered related to the Electoral College.

In 1892, the court upheld in McPherson v. Blacker that Congress can set the date nationally for the Electoral College to meet, but it also said that the states could determine how electors were apportioned and chosen. Sixty years later in Ray v. Blair, the court ruled the Constitution, including the 12th Amendment, does not “bar a political party from requiring” electors to sign a pledge to support the nominees of the national convention.

But the court has not tackled to what extent states can enforce such a pledge. Two closely watched cases arising from the 2016 electoral process, however, might provide the justices with an opportunity to do just that.

In May, the Washington State Supreme Court upheld a state election law that said an elector who did not vote for the candidate he pledged to support could be fined up to $1,000 in civil penalties. “It is within a state’s authority under Article II, Section 1 to impose a fine on electors for failing to uphold their pledge,” the court said in an 8-1 opinion.

In August, a panel of the U.S. 10th Circuit Court of Appeals ruled differently in a case raising similar issues. It said that the Colorado secretary of state erred in removing an elector who cast his vote for then-Ohio Gov. John Kasich, a Republican, even though Colorado law required electors to cast their votes for state-winner Hillary Clinton, a Democrat.

“The Constitution provides no express role for the states after appointment of its presidential electors,” the 10th Circuit panel said, adding, “Once appointed, (electors) are free to vote as they choose.”

It’s possible the Supreme Court will ultimately decide who gets to decide how individual electors vote. If that occurs, the court might provide states additional guidance on just how much leeway they have to impact the Electoral College vote that decides the presidency of the United States.