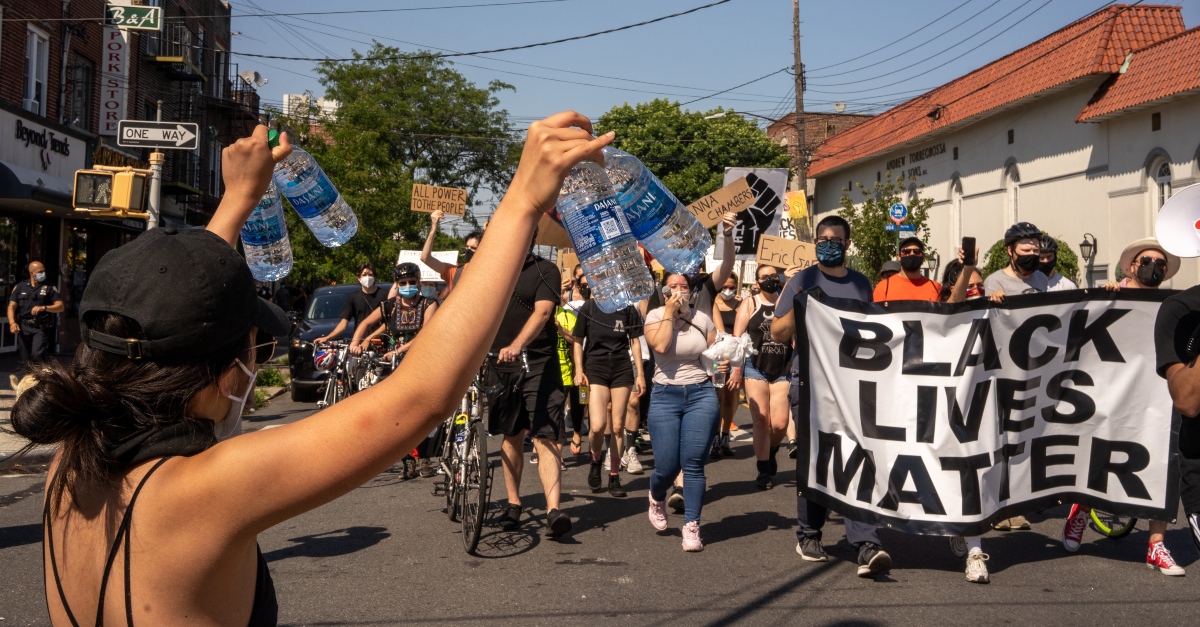 Getty Images: “NEW YORK, NY – JULY 18: Protesters gather in Dyker Heights to demand police reform on July 18, 2020 in the Brooklyn borough of New York City. Dyker Heights was the site of a pro-police rally a week ago that led to confrontations and arrests.”

On June 15, the U.S. Supreme Court declined to review eight separate cases challenging the doctrine of qualified immunity, which protects police and other governmental officials from lawsuits. In a 2018 dissent in an unrelated case, Justice Sonia Sotomayor lamented that the court’s decades-long approach to protect police from civil lawsuits had created “an absolute shield for law enforcement officers.”

Nationally, the issue has flared in the wake of the May 25 homicide of George Floyd in Minneapolis. Police can still be held criminally liable for their conduct, such as the state charges against the four officers stemming from Floyd’s death. But in terms of civil lawsuits, is Sotomayor right? Does the law protect police from being held liable for money damages for most brutality and other civil rights violations?

Qualified immunity for police officers emerged as a legal doctrine nearly 40 years ago, created and expanded by the Supreme Court based on its interpretation of a post-Civil War statute. That 1871 law sought to enforce the U.S. Constitution’s 14th Amendment, which gave equal protection under law for all Americans, including Black people. The key section, later codified into U.S. law and known as Section 1983, gave individuals a right to sue state and local government officers for damages to remedy violations of their constitutional rights committed under color of state law.

But starting in 1982 in Harlow v. Fitzgerald, the Supreme Court erected a high bar to sue public officials, including police, based on the court’s concerns that these individuals should not be penalized for conduct that was objectively reasonable and that frequent litigation could interfere with their work. The high court, in a series of cases, established that qualified immunity is “an immunity from suit rather than a mere defense to liability.” In effect, police officers now have the legal right to a pretrial dismissal of civil suits arising out of their official conduct when a plaintiff sues for money damages unless the plaintiff can show that materially similar conduct has been held to be unconstitutional by a prior court. Lower court judges are expected to adhere to Supreme Court precedent and, in most circumstances, rule in favor of police even before the case goes to trial.

Under the Supreme Court’s line of decisions, immunity extends to an officer’s unconstitutional or otherwise unlawful conduct if it does not “violate clearly established statutory or constitutional rights of which a reasonable person would have been aware.” The court has defined qualified immunity broadly, saying that immunity should protect “all but the plainly incompetent or those who knowingly violate the law.”

In practice, the plaintiff must demonstrate that the law enforcement officer’s challenged conduct was virtually identical to the facts of a previous Supreme Court or U.S. Court of Appeals decision finding a constitutional violation. The slightest factual variations can render a constitutional right not “clearly established” — meaning that the officer faces no civil liability for the violation.

An article published in the Notre Dame Law Review in 2018 underscores how difficult it can be to win damages from a police officer. It found that in more than 30 qualified immunity-related cases considered by the Supreme Court, plaintiffs prevailed in only two. The first was a 2002 decision in which the court reversed a lower court grant of immunity, saying Alabama corrections officers violated the Eighth Amendment ban against cruel and unusual punishment when they handcuffed a prison inmate to a hitching post and left him in the hot sun for seven hours for punitive purposes. Two years later, the Supreme Court ruled that a federal magistrate’s warrant was invalid on its face and federal agents were not entitled to immunity because the resulting search was “clearly unreasonable under the Fourth Amendment.”

“Qualified immunity balances two important interests — the need to hold public officials accountable when they exercise power irresponsibly and the need to shield officials from harassment, distraction and liability when they perform their duties reasonably,” Justice Samuel Alito wrote for a unanimous Supreme Court in Pearson v. Callahan in 2009.

In that case, which involved a drug-related arrest stemming from a warrantless search, the court made it easier for officers to avoid liability. Previously, a lower court evaluating a claim of qualified immunity was required to address two questions: whether “the facts alleged show the officer’s conduct violated a constitutional right”; and “whether the law clearly established that the officer’s conduct was unlawful in the circumstances of the case.”

While the two-step analysis was once considered mandatory, in Pearson the Supreme Court held that judges could “exercise their sound discretion in deciding which of the two prongs of the qualified immunity analysis should be addressed first.” The result has been that the Supreme Court, as well as lower courts following its lead, have jumped to the “clearly-established” prong of the analysis without deciding the so-called “merits” question of whether, in fact, the challenged conduct violates the Constitution. This has left plaintiffs in the Catch-22 position of having to find a case on point that set standards under the Constitution.

Aside from Sotomayor, Justice Clarence Thomas has emerged as a second outspoken critic of qualified immunity. In last month’s denial of certiorari of the eight decisions pending review, he wrote a six-page dissent, arguing that the modern doctrine has strayed too far from the 19th century immunities. “In several different respects, it appears that our analysis is no longer grounded in the common-law backdrop against which Congress enacted the 1871 act,” said Thomas, considered the court’s strongest originalist.

Since Floyd’s death, in Congress, mostly Democrats are calling for legislative changes that would modify or eliminate qualified immunity with the Republican Senate and White House holding fast to the current system. So, as Sotomayor suggests, the bar preventing most civil lawsuits against police misconduct will remain high until Congress or the Supreme Court changes the existing doctrine.