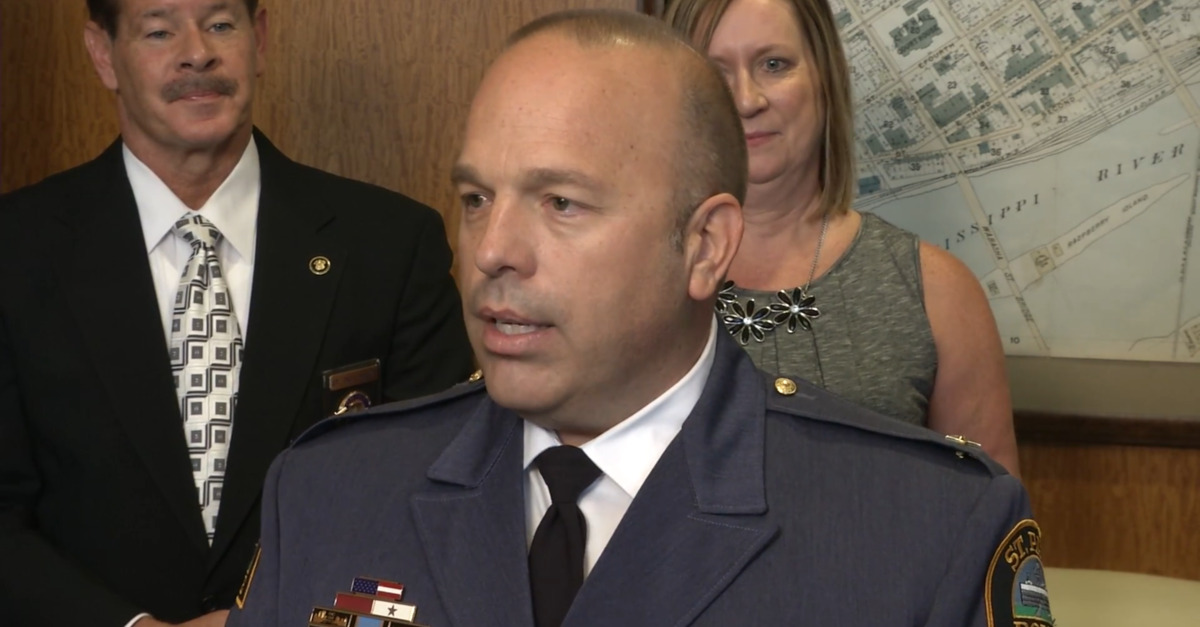 The police chief of St. Paul, Minnesota summed up the logic of activists and policymakers who have moved for budget cuts to police departments nationwide: defunding law enforcement means there will be fewer jobs for sworn officers.

St. Paul Police Chief Todd Axtell framed his analysis of the situation as part grievance and part-warning, saying that officers and civilian employees of his department would be negatively impacted across the board. His words cam in an email to every single employee in the St. Paul Police Department.

“Mayor Carter has directed the police department to present a $9.2 million cut from its budget,” Axtell noted. “Sadly, the cold, hard truth is that cuts mean positions. It means positions both sworn and civilian, at all ranks.”

“I know this is a hit to our collective soul,” Axtell wrote. “I shared with the Mayor my disappointment and urged him to reconsider.”

The police chief goes on to say he “had to submit a list of cuts” in order to comply with the order from the city’s elected leadership.

Those cuts were not detailed in the email.

Axtell also said that such a budgetary exercise was nothing new for him–noting that he had gone through budget cycles seven times before as chief of police and said that “initial projections normally change throughout the process.”

“But I can’t make any promises, other than to support you and to be a tireless advocate for our department and the safety of the city,” the email said. “Don’t lose hope. Instead, remember that I believe in each and every one of you. Keep doing what others won’t. And know that I’m so damn proud of you.”

Axtell framed his dire warning as a motion toward promised transparency. He said he wanted to share the information with his employees in an effort to tamp down on “rumors” and to give them such information “before the media reports on it.”

Carter framed the prospective cuts as part of an overall budget crunch spurred on by the novel Coronavirus (COVID-19) pandemic–which has resulted in severe and deep income shortfalls for municipal governments across the country since the deadly contagion affected the economy.

“This economy is going to require us to make some really hard decisions, because we can only spend the money that we have,” the mayor told the Minneapolis Star Tribune on Monday. “And frankly, I anticipate bringing forward a budget that I would likely never propose under any other circumstances.”

After the police chief sounded the alarm bell, however, the mayor’s office appeared to make an effort on damage control–stressing the conditional nature of those budgetary requests.

“While the mayor has yet to make final decisions about the budget he’ll propose to the City Council next month, the realities of a global economic crisis are likely to require reductions in every city department,” Communications Director Peter Leggett told local ABC affiliate KSTP. “We are considering every option to avoid adding a large property tax increase to the challenges our residents are currently facing.”

[image via screengrab/City of St. Paul]