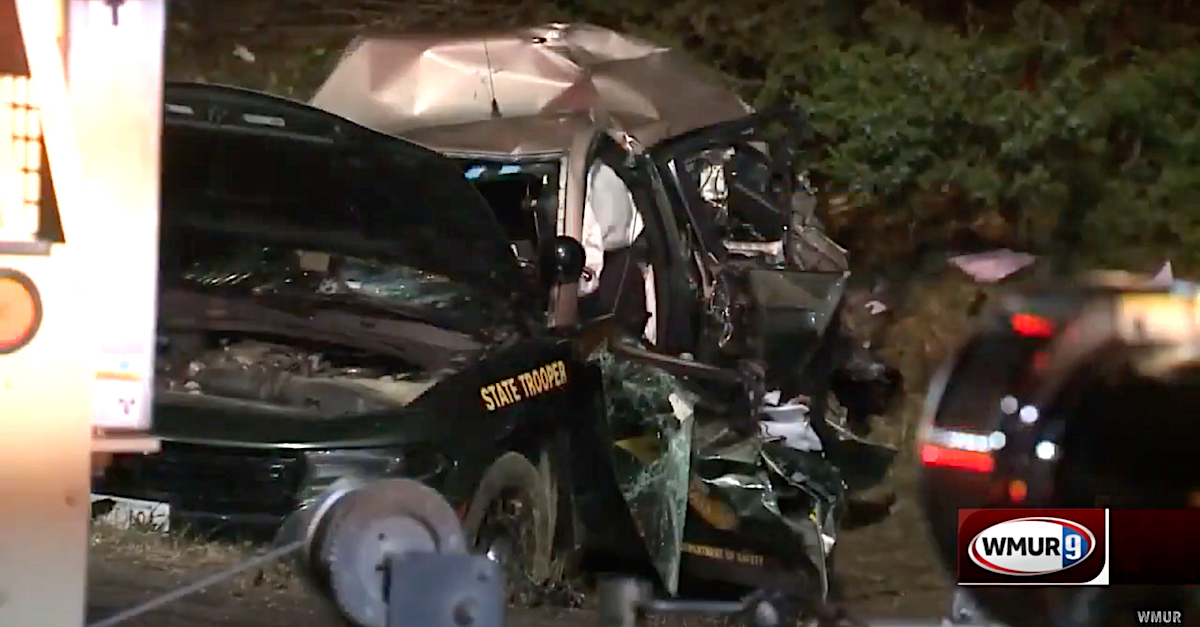 A tractor-trailer collision destroyed a vehicle driven by New Hampshire State Police Staff Sgt. Jesse Sherrill on Oct. 28, 2021. Sgt. Sherrill died as a result of the crash. (Image via screengrab from WMUR-TV.)

A New Hampshire state trooper died overnight after his police SUV was obliterated in a collision with a tractor-trailer. Col. Nathan Noyes, the head of the New Hampshire State Police, announced that Staff Sgt. Jesse Sherrill died in the crash. Sherrill was an assistant troop commander for state police Troop A in Epping, N.H., a small town midway between Manchester and Portsmouth, Noyes said.

Noyes said that Sherrill was working to protect a paving crew that was installing shoulder rumble strips in a work zone. The private construction company’s work was slated to occur between at 8:00 p.m. on Wed., Oct. 27 and to conclude at 5:00 a.m. on Thurs., Oct. 28.

At 12:33 a.m., a statewide 911 center received a call that a “serious” collision had occurred on Interstate 95 just north of Exit 3 northbound in Portsmouth, N.H., involving a tractor-trailer and a state police cruiser. 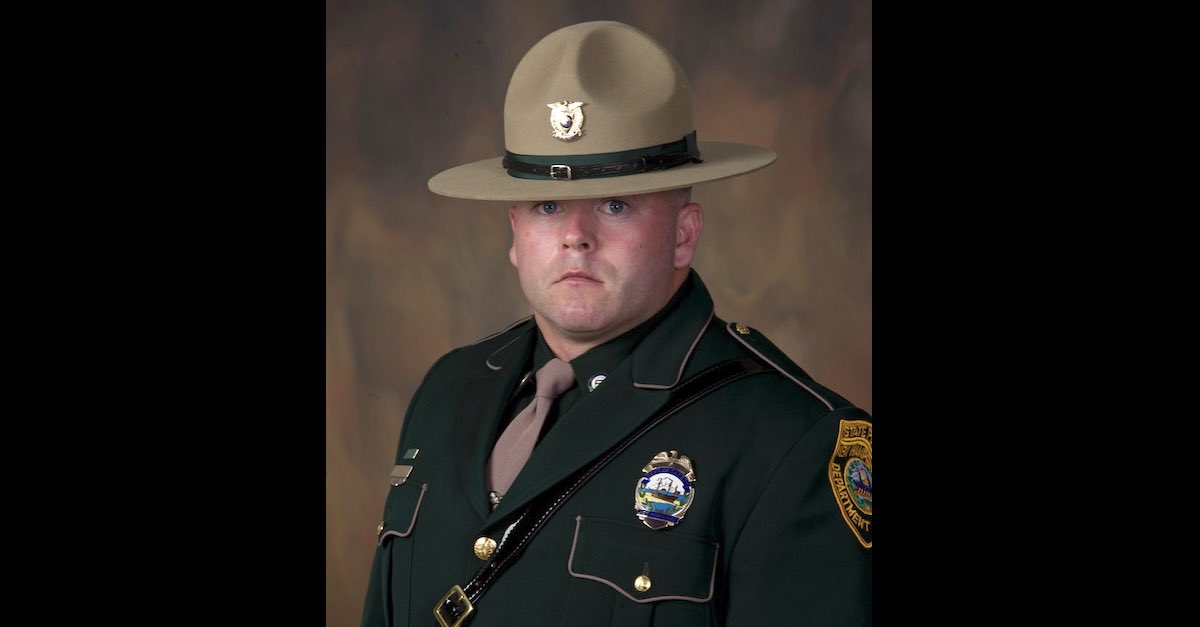 The name of the truck driver was not immediately released. The identity of the company for whom the driver was working was also not released. Television images from the scene broadcast by Manchester, N.H. ABC affiliate WMUR-TV showed that the trailer portion of the semi was marked with advertisements for Lay’s potato chips; however, those markings may not necessarily be indicative of the owner of the rig or of the employer of the driver. 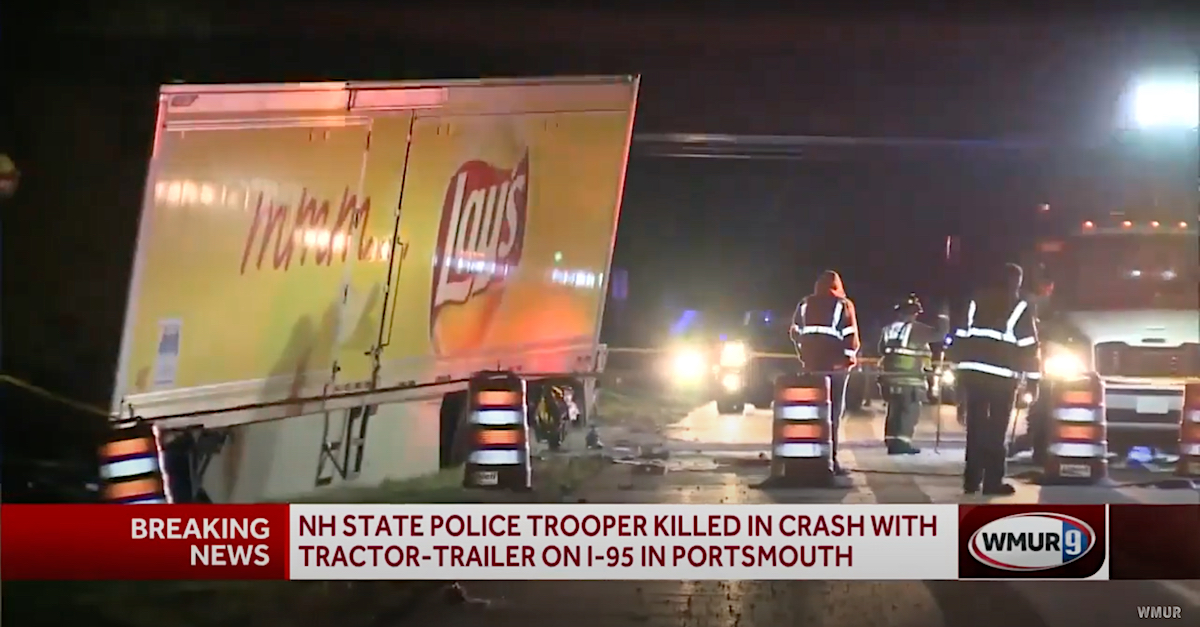 (Image via screengrab from WMUR-TV.)

I-95 is a major travel artery between metropolitan Boston and the state of Maine. A little more than 16 miles of the highway takes travelers through New Hampshire in the latter state’s seacoast region. The Maine border is only three miles north of the accident site.

Reconstruction crews are investigating the collision. Noyes said the Rockingham County Attorney’s Office was supervising the matter in connection with investigations by state police forces in both New Hampshire and Maine. WMUR-TV reported that the Maine State Police sent manpower and equipment to assist on the scene.

Sherrill started his career in 2001 with the Hooksett Police Department. He went to work with the state police in Dec. 2002 where he held various posts, including with an Attorney General’s office task force.

“Staff Sgt. Sherrill rose through the ranks of Troop A, receiving his last promotion to assistant troop commander this past Aug. 13, 2021,” Noyes said. “Staff Sgt. Sherrill was known as a trooper’s trooper, a consummate, dedicated professional, and a true family man.”

New Hampshire Gov. Christopher T. Sununu (R) ordered flags on public grounds around the state to be flown at half staff through sunset on Sunday.

“The entire state of New Hampshire is mourning the loss of Staff Sgt. Sherrill,” the governor said. “He was an individual who nobly answered that call to service, and he was steadfast and devoted to the safety and well-being of his fellow Granite Staters.”

Sununu offered his condolences to Sherrill’s family and to those who worked alongside the fallen trooper.

Noyes thanked the local Portsmouth Police Department, Portsmouth firefighters, and the staff at the Portsmouth Regional Hospital for providing “exceptional, selfless service” during the tragedy. He also thanked the New Hampshire Department of Transportation for its assistance.