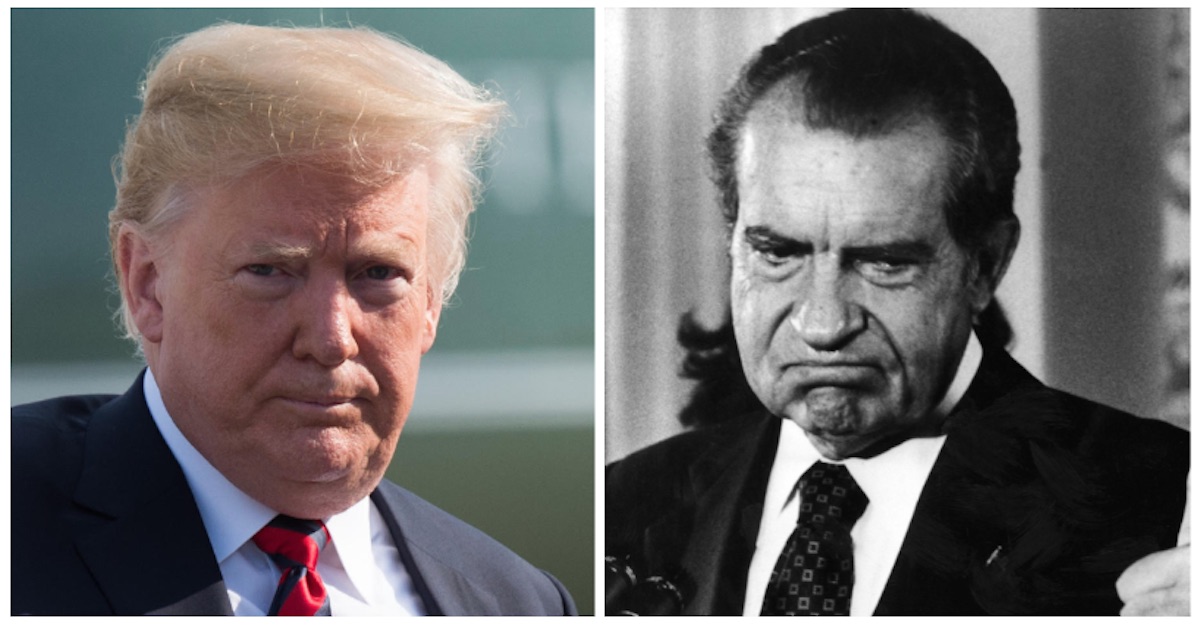 President Donald Trump gave a phone interview on Fox & Friends on Friday morning that was the verbal equivalent of an Escher drawing.  What began with the usual whining about the “Russia hoax” and what a loser former Attorney General Jeff Sessions turned out to be, the president’s stream-of-consciousness ego-babble descended into a dizzying compare-and-contrast to former President Richard Nixon.

Trump declared himself to have, “learned a lot from Richard Nixon: don’t fire people,” before pronouncing himself a student of history. This certainly isn’t the first time we’ve heard Tricky Dick’s name in close proximity to Trump’s, but the quip usually comes from those criticizing the president.

It’s been several decades, so here’s a little refresher on what went down with Nixon. At the time, Archibald Cox had been the special prosecutor charged with looking into the burglary at Watergate. Nixon was not pleased with Cox’s investigation, so Nixon directed his Attorney General, Elliot Richardson, to fire Cox. Richardson (who had already explicitly promised the Congressional Oversight Committee not to interfere with the Watergate investigation) smelled danger and refused to fire Cox. To underscore the inappropriateness of firing Cox, Richardson resigned as attorney general.

A frustrated Nixon then directed Deputy Attorney General William Ruckelshaus to fire Cox. Same problem, same result. Ruckelshaus also promised Congress not to interfere, also refused to axe Cox, and also resigned in protest. Finally, Nixon found Solicitor General Robert Bork (who had made no promises to Congress), and got Bork (of failed SCOTUS infamy) to do his bidding and fire Cox.

Obviously, Nixon’s attempt to cover his own ass by firing the guy who was charged with investigating Watergate was a bad idea. The thing is, though, Trump not didn’t learn from Nixon’s misdeeds – but he doubled down on Nixon’s choices in a decision to fire former FBI Director James Comey.

Nixon’s neutralizing of Cox was bad, but Trump’s firing Comey was way worse. Cox’s job had been simply to get to the bottom of the Watergate scandal. Comey, by contrast, had duties far beyond a Trump-Russia investigation. Retaliatorily firing the head of the nation’s top law-enforcement agency for failure to pledge undying personal loyalty is far wider in scope than the Nixon-Cox firing. So perhaps Trump could point out exactly where he “learned a lot by watching Richard Nixon,” about how not to fire people. From where I sit, Trump attempted to riff on Nixon’s jam and succeeded in botching things considerably.

Nixon’s people, by the way, have not been pleased when this comparison has been raised in the past.

Trump’s attitude toward his disgraced presidential predecessor seems to fall somewhere between respect for a mentor and heed for a cautionary tale. Trump continued in the interview to say:

Of course there was one difference — one big difference — number one he may have been guilty and number two he had tapes all over the place. I wasn’t guilty, I did nothing wrong, and there are no tapes, but I wish there were tapes in my case. But I learned a lot from Richard Nixon.

Following the president’s logic here is giving me a migraine. The “one difference” is two things. One thing is that Nixon was guilty for doing something that Trump also did, but simultaneously learned not to do. The other thing is that Nixon was caught on tape, which Trump was not. Trump is simultaneously relieved and frustrated that there are no tapes, because the tapes sunk Nixon, even though they would exonerate Trump. So Trump learned not to have “tapes all over the place,” but also that he should have tapes. Truly, he has a dizzying intellect.