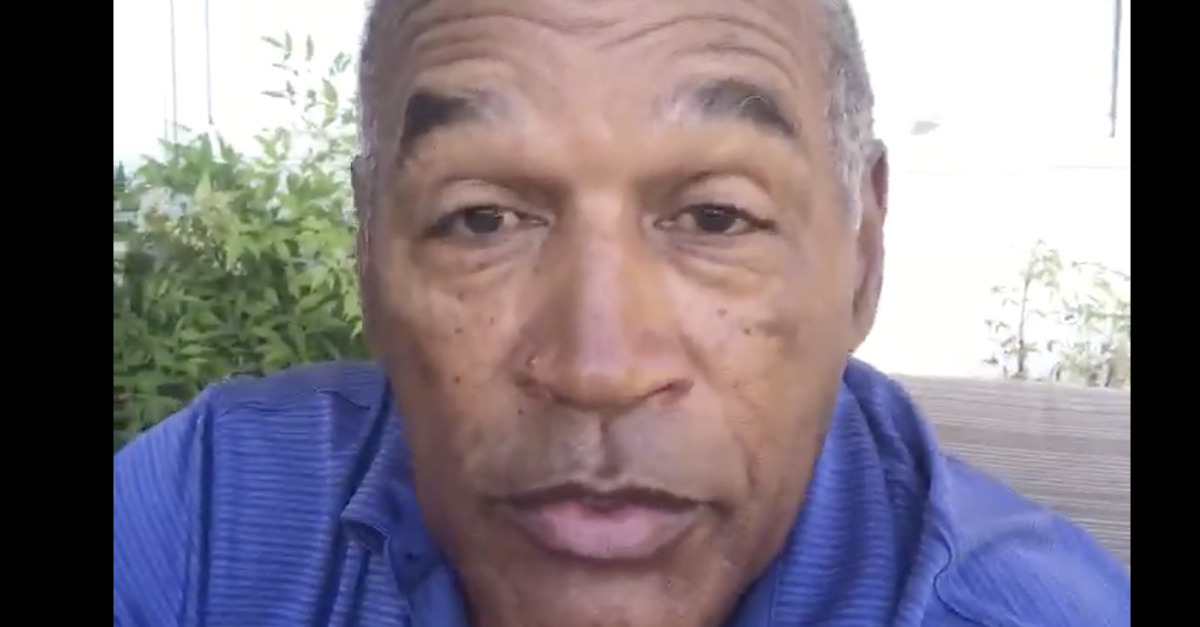 There are many thing about 2020 for which I have been woefully unprepared. O.J. Simpson talking about alleged murders and Mark Fuhrman talking about racism were two of them.

Simpson shared the following video Friday, and if you can get past the abject class division between himself — a famous millionaire — and George Floyd — who by all accounts was neither famous nor a millionaire — it’s a solid message.

Will it ever change? pic.twitter.com/vTopqrIonR

Simpson called the killing of George Floyd a “sad day” and said that rioting is based on a “fear that nothing is going to be done about it,” because “that’s been the case in the past.”

Right now is the time when I want to hear the privileged stand up for the disenfranchised, and I agree fully with everything Simpson said.  But I want literally anyone else to be saying it. Yes on the message; no on the messenger.

Simpson continued in the video to talk about the Los Angeles riots following the Rodney King verdict. That case, nearly 30 years ago, was the trial of four Los Angeles cops caught on tape brutally beating King, a young black man; the officers were acquitted, and L.A. burned for nearly a week. The case became the quintessential example of America’s parallel justice systems.  It was a little icky to hear Simpson discuss those riots, as the residual racial tensions were precisely what his defense team exploited during his trial. And like the officers who beat King, Simpson too was acquitted.

Explaining the widespread rage and resulting rioting over Floyd’s death, Simpson said, “The only time it’s gonna stop is when you start truly holding the perpetrators to account, start putting them in jail.” Simpson added that the Minneapolis officer involved (Derek Chauvin, who has now been charged with Floyd’s murder) has already been the target of official discipline and quipped, “I guarantee you if you look at those cases, he probably deserved more than just 2 disciplinary actions.”

Simpson also shared his thoughts on the arrest and release of CNN reporter Omar Jimenez and his crew while covering the protests in Minneapolis. “The [arresting] cop said he was just following orders. But who gave that order?” Simpson asked. “The guy who gave that order should be disciplined or demoted or something.”

Simpson ended his video with this gem, which presumably referred to Chauvin:

“I guarantee you if he was black and he did this to a white guy, he’d already be in jail. The point is what are we gonna do to stop this happening in the future? Start convicting these guys. I’m just sayin’. Take care.”

Yes. I agree. A black man might have been in jail faster. I also agree that Rodney King should not have been beaten and that George Floyd should not have been the victim of police brutality. Simpson is correct to call attention to these matters. He is right to call out our disparate treatment of blacks in America. He’s right that riots are often the result of unbearable anger. But, hearing this come from Simpson is just plain awkward. It’s too hard to unknow that he, a domestic abuser, was found civilly liable for the deaths of two people. It’s hard to separate the message from the messenger, and it seems the Twitter chorus also feels similarly.

This isn’t, by the way, the first time Simpson has been so ballsy. In the early days of corona, a jocular Simpson shared his thoughts on Tiger King, and said he knew Carol Baskin murdered her husband.

So let’s see, where are we. Yes, O.J. Simpson is getting ready to get drinks with Cornel West or something.

We traded Kanye for him last year… He’s black now.

But because it’s 2020, there’s more. You may want to grab something to stop your head from exploding.

Simpson released another video later on Friday – this time, calling out Fox News for using Mark Fuhrman as a police expert to comment on the Floyd case.

Who sat around and said, “let’s book a law enforcement officer! Mark Fuhrman!”

Mark Fuhrman on Laura Ingraham’s show to talk about racism?!@IngrahamAngle you are a disgrace https://t.co/c16EWjNHwD

For starters, it is beyond amusing that the Juice clearly has zero idea who Laura Ingraham is.

But, of course, the real insanity is how some segment producer at Fox thought it would be a great idea to book the poster-cop for white supremacy as an expert commentator right now.

During Simpson’s 1995 prosecution for murder, Fuhrman testified about discovering the famed bloody glove recovered at Simpson’s estate. During Fuhrman’s testimony, he not only perjured himself about his use of racist slurs – specifically in the context of police violence against black suspects, but also invoked his Fifth Amendment rights when asked if he’d planted evidence in Simpson’s case. When Simpson was later acquitted, many credited the narrative of a corrupt Fuhrman carrying out a racist plot against Simpson as a critical factor in the verdict.

Twitter was there to call out the insanity of Ingraham’s choice to use Fuhrman as an expert.

You thought Laura Ingraham booking Mark Fuhrman to discuss racism and the police was nuts, tomorrow night she has Casey Anthony on to give babysitting tips.

What, David Duke was busy? https://t.co/Doq9gXydB6

“To bring a different opinion to this dumpster fire, we’d like to bring on Detective Kerosene…”

Next up, Kato Kaelin will discuss this year’s fashions with a focus on gloves.