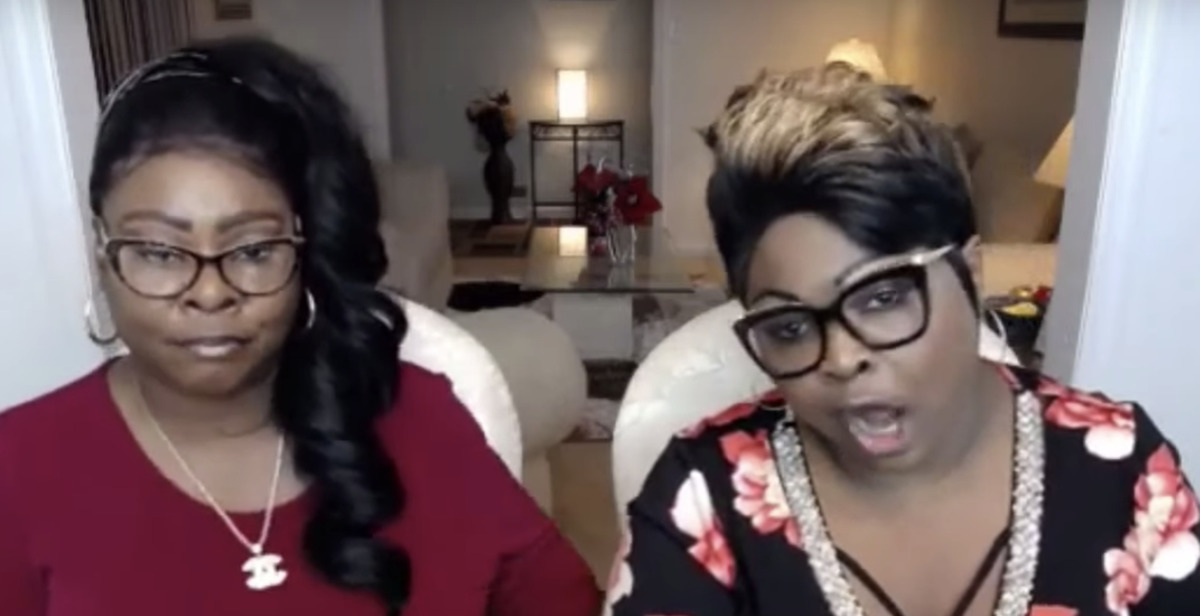 Since Donald Trump has invaded the oval office, there’s been seemingly no end to the need for legal analysis of bullshit defamation claims. But today, the would-be Charles Harders of the world have really outdone themselves, and I am here for all of it.

Apparently, blogger Bianca DeLaRosa (aka “Wonderbitch”) of Wonkette seriously upset Fox News fan faves Diamond & Silk. For those of you who have been heretofore blissfully oblivious to these two, it’s time you share my burden. Lynnette Hardaway and Rochelle Richardson, popularly known as “Diamond and Silk,” are Donald Trump superfans who have ridden Fox News’ star of ignorance to MAGA megafame.  The two regularly give deliriously moronic commentary on all things Trump-worship, to the delight of audiences who enjoy seeing two black women make utter fools of themselves.

An obviously frustrated DeLaRosa published a piece titled, “Pretty Sure Diamond And Silk Are BlackWhite Nationalists.” It included this excerpt, which apparently pushed Diamond and Silk right over the pretending-to-be-litigious edge:

I’m getting super tired of Diamond and Silk, especially since at this point they’ve been running this con long enough for me to accidentally remember BOTH of their real Government names, Lynette Hardaway (Fucking Diamond), and Rochelle Richardson (Goddamn Silk). I have long despised both trolls; I’ve hated their hair, their animal print, their dumb facial expressions, their jiggin’ and jivin’, but most of all? I have hated the way they prop up the most vile white supremacy in our government, and it’s time to start calling that shit out.

A cease and desist letter ensued. Putting aside the letter’s horrific grammar and glaringly awkward wannabe-legal language, let’s, for fun, see if it makes any valid legal points. 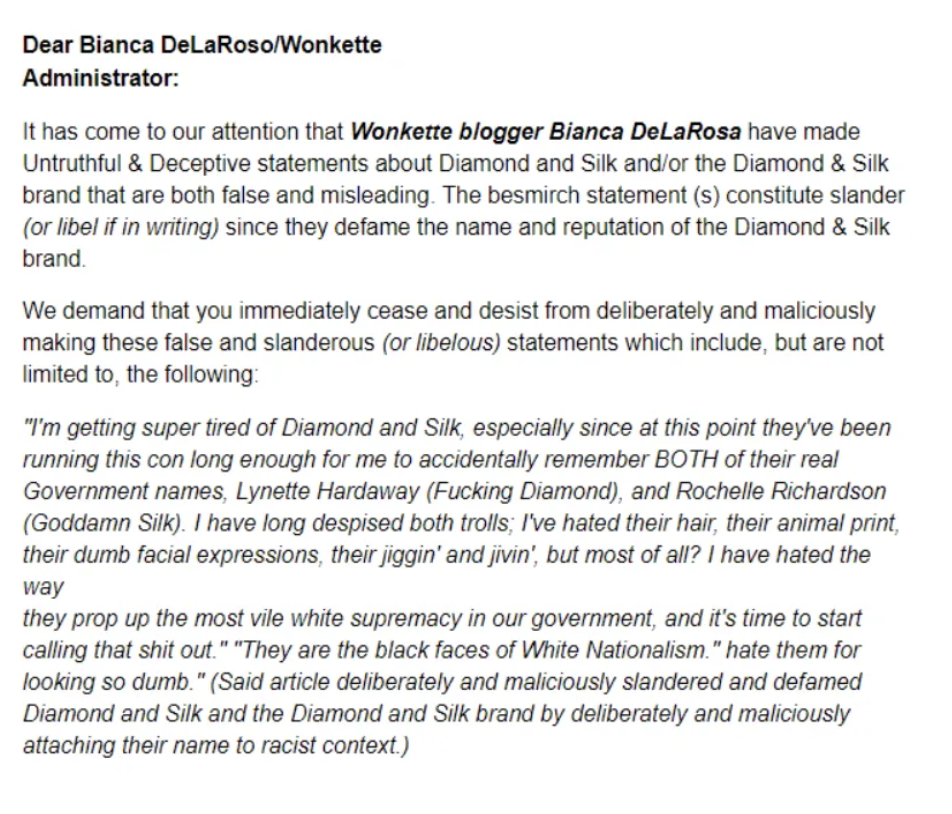 Short answer: it doesn’t. That was a fun exercise.

DeLaRosa’s piece on Wonkette was a scathing indictment of Diamond and Silk’s media contributions. It quoted the two women and included links to their videos; what it did not do is make any false statements of fact about them. Sure, DeLaRosa minced no words in sharing her opinion about how misguided, detrimental, and generally stupid she believes Diamond and Silk to be. But calling someone names – even really good ones like “Punkin’ n’ Dunkin’”or “bootleg Bobbsey Twins” – isn’t defamation.

According to the cease and desist letter demanding a retraction, Wonkette defamed Diamond and Silk by, “deliberately and maliciously attaching their name to racist context.” I sure hope these two get one of those fancy Fox News lawyers to look over their libel complaint before a judge starts assigning attorneys fees, because “attaching a name to racist context” isn’t what’s required for defamation.

Defamation requires a statement of fact that is untrue.  There’s more, too. The falsehood needs to have caused the victim financial harm, and in the case of celebs like Diamond and Silk, we’d also need some “actual malice.” But we’re not going to get anywhere near actually analyzing whether Wonkette did the right amount of research before posting, because DeLaRosa’s piece contains exactly zero potentially false statements of fact.  The only portions of the Wonkette piece that even mention facts of any kind are the references to Diamond and Silk’s appearances or videos; it’s pretty clear that all those actually happened, since there are links to them in the piece. That brings us to the logical conclusion that among the mountainous heap of terms Diamond and Silk simply don’t understand is the distinction between “facts” and “opinion.” Sadly for them, legal remedies aren’t available for public figures looking to be compensated for being disliked.

Honestly, you’d really think these two MAGA muppets would have learned something from Trump (okay, no I didn’t really think that either). Trump, who loves to threaten people with defamation lawsuits, seems to understand that he’s at least supposed to point to some alleged lie and declare it untrue.

Wonkette, which published the cease and desist letter in a piece titled, “In The Matter Of Diamond And Silk’s Very Real Lawyer v. Wonkette: Bring It, Sh*thead,” appears unconcerned about the women’s threats. Truthfully, anyone who could coin the term, “Pocket Bagger Vance,” is doing just fine on their own. If Law&Crime gets a letter demanding that we retract any “besmirch statement (s),” we’ll be sure to let you know.