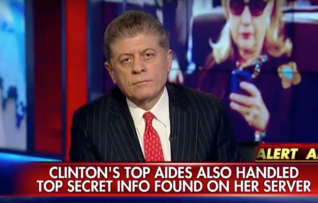 Since the recent faux-news debacle, in which Fox Chief Judicial Analyst Andrew Napolitano announced that according to his “inside sources,” a British intelligence agency wiretapped the Trump campaign, “The Judge” has found himself benched. Apparently, there are limits to Fox’s tolerance for propaganda, even in its workshop of sometimes fact-averse conspiracy theories and partisan hackery. While last week’s incidents seems to have pushed Fox over the edge, it sure wasn’t the first time Napolitano purveyed drivel disguised as “judicial analysis.” Here is a reminder of a few times Nap got it very wrong:

Noticing a pattern yet? Legal analysts often disagree with one another about statutory interpretation, the meaning of various precedents, or the application of law to a set of acts. Reasonable minds can certainly differ over the outcome of many legal debates. But Andrew Napolitano often breaks the key rule of legal analysis – he doesn’t stick to facts. He apparently remains off the air at Fox News, but hasn’t been officially “suspended.” Sure. When a network’s “chief judicial analyst” is suddenly MIA during a Supreme Court confirmation hearing, I’m sure it doesn’t mean he’s been suspended. Good for Fox for finally taking action, even if they aren’t admitting it.