Johnny Depp's 'Depp Heads' Back Him Outside Court at Trial 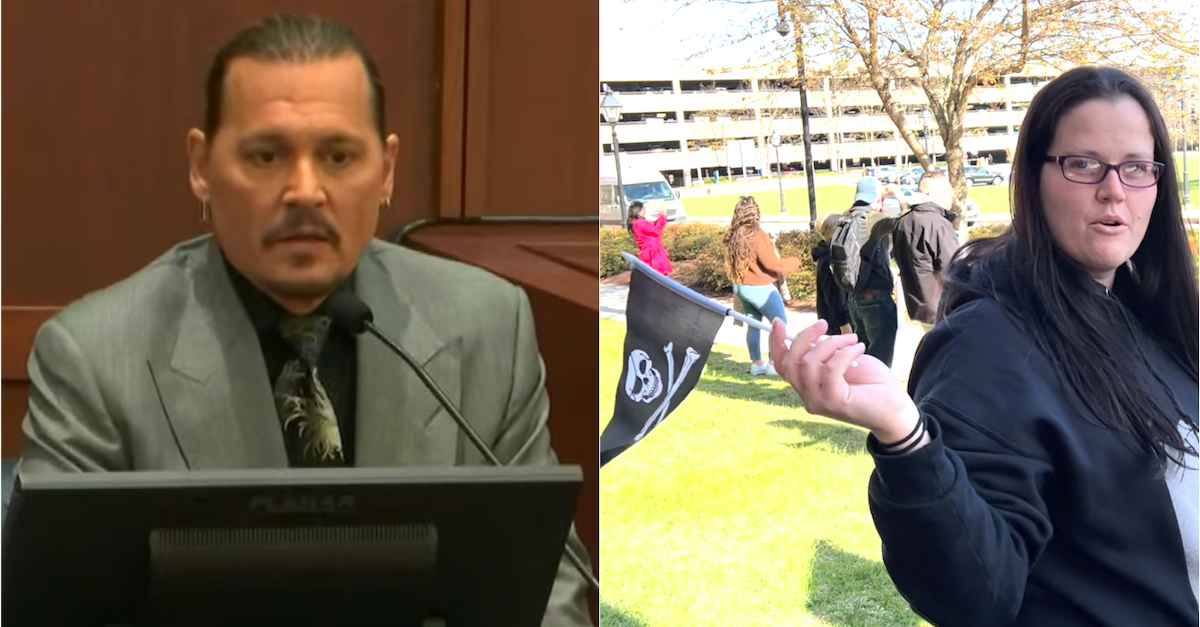 Johnny Depp testifies in his defamation trial against ex-wife Amber Heard. Outside, one of his supporters Kristina Gibbons waves a pirate flag in reference to his breakaway role as Captain Jack Sparrow.

They call themselves the “Depp Heads”—the Johnny Depp superfans who travel from across the country to a small county courthouse in Fairfax County, Va.

Every morning, they wait in line as early as 5 a.m. in order to be among the first 100 people to secure a wristband that will allow them to attend the trial between Depp and his ex-wife Amber Heard, who accused the Pirates of the Caribbean star of domestic abuse in 2016.

Law&Crime Network correspondent Angenette Levy details the travels, origins and beliefs of the “Depp Heads” on the latest episode of the podcast, “Objections: with Adam Klasfeld.”

“Remember the Grateful Dead you had the ‘Deadheads,’ right?” Levy asked. “They were the people that traveled around and followed Jerry Garcia and the rest of the band and went from city to city. Well, now we have apparently ‘Depp Heads.'”

On the first day of jury selection, Depp Heads were out in full force from across the country, and Levy taped interviews with those who flew in across the country, including California, Minnesota, and elsewhere. Miniature pirate flags—an allusion to Depp’s breakaway role as Captain Jack Sparrow in Pirates of the Caribbean—waved in the breeze outside the courthouse with constant regularity, and handing them out to eager recipients was Minnesota mom Kristina Gibbons, who had brought her four children with her.

“Only two of them are here right now,” Gibbons told Levy.

Ary, who flew in from Los Angeles, Calif., sported a brown fedora and long, shaggy hair reminiscent of Depp’s style, telling Levy that his fandom began with an early cut: What’s Eating Gilbert Grape. He was also familiar with Depp’s work as a musician and an artist.

As evident from the Grateful Dead allusion of his fans, Depp carries longstanding associations with 1960s counterculture. He has spoken about his friendship with gonzo journalist Hunter S. Thompson, whose books have formed the basis of multiple movies that cast Depp in starring roles. The most famous was Fear and Loathing in Las Vegas, but perhaps the most fateful was the critically panned film The Rum Diary, where Depp met Heard. Their tumultuous relationship would transform the Hollywood luminary into an outcast.

“So strange when one day you’re Cinderella, so to speak, and then in 0.6 seconds, you’re Quasimodo,” Depp testified on his first day of trial.

The Depp Heads are evangelical about his rehabilitation, and they are teaching their children to take up his cause.

Asked why she brought her children, Gibbons replied: “They love a lot of his roles, especially Jack Sparrow and Willy Wonka.”

Far fewer and farther between were supporters of Heard, and Levy found only one lonely placard-holder in the Aquaman star’s support outside the courthouse.

In 2018, Heard wrote an op-ed in the Washington Post titled “I spoke up against sexual violence — and faced our culture’s wrath. That has to change.” Though it didn’t mention Depp by name, she wrote a sentence with an unmistakable reference to their tumultuous marriage: “Then two years ago, I became a public figure representing domestic abuse, and I felt the full force of our culture’s wrath for women who speak out.”

Depp filed a $50 million lawsuit over the editorial, which is finally coming to a head inside a Virginia courthouse, where Depp recently testified that he was breaking a six-year silence.

Outside of court, the social media war between the two rages on between #JusticeforJohnnyDepp faces off against #IStandwithAmberHeard. The case has widely been described as a reckoning over a different hashtag that propelled Heard’s story: #MeToo. This isn’t the first time Heard’s domestic abuse has been litigated. Depp supporter Tiffany Lunn specifically told Levy that she was persuaded by evidence that came out during legal proceedings in Europe. However, a British court found against Depp, who previously sued a newspaper for calling him a “wife-beater.” Depp testified that he brought the case in Virginia to clear his name.

On the podcast, Levy describes her travels among the Depp Heads, describes other scenes from the courthouse, and explains why the case found its way from Hollywood to a courthouse in Fairfax County, whose defamation laws have made it an attractive jurisdiction for people ready to litigate over bad press.

(Screenshots via the Law&Crime Network)