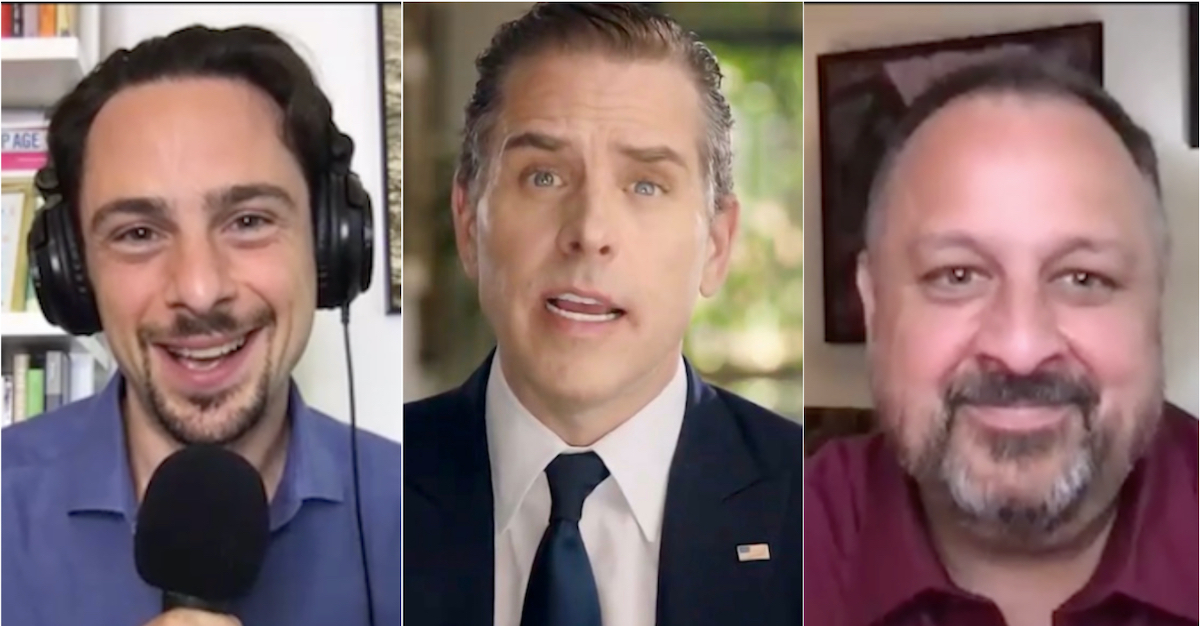 From his stint on a Ukrainian oligarch’s company board to endless conspiracy theories about his laptop, the career path of the president’s son Hunter Biden has ignited controversy for years. His recent foray into the art world, however, has put him under fire outside the familiar corners of the political right.

The week after the New York Times reported that the First Son hopes to fetch up to $500,000 apiece for some 15 works of art, Shaub did not mince words.

“Now, that’s a criticism of Hunter Biden, and he’s a sympathetic character, who we can feel bad for on many levels,” Shaub continued. “But some of his problems are of his own making, in that he has always built his career around being Joe Biden’s son. And here he is doing that, once again. If he were a patriot—if he cared about this country—he would not want to tarnish his father’s reputation that way.”

The White House defended the arrangement and acknowledged input into crafted the rules of anonymity governing the purchases, which Secretary Jen Psaki described as “appropriate safeguards.”

“I think it would be challenging for an anonymous person who we don’t know and Hunter Biden doesn’t know to have influence,” Psaki told reporters on July 9. “So that’s a protection.”

Citing the Washington Post’s coverage of those measures, Shaub noted that anonymous “officials who helped craft the agreement said that if buyers were publicly disclosed it would restrict interest.” Those officials were never specified to be White House actors, but Shaub noted that was an allusion to the bottom line rather than the public interest.

“‘Restrict interest’ is a cute way of saying make it harder for hunter Biden to profit off the presidency, because fewer people would be interested in buying if they knew that the world would know who they were,” Shaub said.

A far tougher critic of the Donald Trump administration (which he served for a few months before tendering his resignation), Shaub notes the ethical entanglements of the 45th president’s family were “far, far worse,” but he argues the current art controversy stands in the way of an “ethical Renaissance” that he would like to see in Washington.

“When people think I’m blowing the Hunter Biden thing out of proportion, what they’re missing is that this is all part of a larger concern. And it isn’t really about Hunter Biden. It’s about the failure to understand that we need an ethical Renaissance in government, or we’re going to find ourselves in an even worse place than we did for the last four years,” he said.

This is not the first time the elder Biden faced criticism for allegedly failing to end Trump’s practice of blurring the presidency with his family. After Hunter Biden acknowledged that his “tax affairs” are under investigation, many criticized the decision by his father’s then-presidential transition team to release a joint statement in the son’s support.

Shaub acknowledges that many Democrats dismiss Hunter Biden coverage out of hand because the president’s son has long been subjected to a “partisan smear campaign,” including weaponized misinformation.

“I think people’s reaction to that is part of what makes them go white hot when they hear any criticism of Hunter Biden, they just immediately assume anything as part of that,” Shaub said. “Well, let’s be clear, most of those allegations against him are not only frivolous, they were malevolent. They were ridiculous—and intentional. They were supported in some aspects by actors affiliated with the Russian government.”

That allegation has been supported by the the U.S. intelligence community, which released a report in March finding that the Russian government tried to hack Burisma—the company where Hunter Biden was a board member—in order to dig up dirt on him. The intelligence community also found that the Kremlin tried to amplify misleading claims about Biden’s family.

Though attempts to connect Hunter Biden to shadowy international plots lacked evidence, Shaub found the First Son’s acceptance of a spot on the Burisma board problematic in its own right.

“They were trying to burnish the image of Burisma, which had corruption tainting it for a while,” Shaub said, noting the travails of its oligarch founder Mykola Zlochevsky.

As for whether Shaub’s criticism has moved the needle in a White House he served during Biden’s vice presidency? The ethics lawyer notes, bluntly: Nothing has changed.

(Photo of Hunter Biden from Handout/DNCC via Getty Images; other photos via Zoom screenshot)