Oath Keepers Chatter About ‘Civil War’ Was a ‘Sincere’ Plan, Not the ‘Rantings and Ravings of Old Men at a Barber Shop,’ Prosecutor Tells Jury 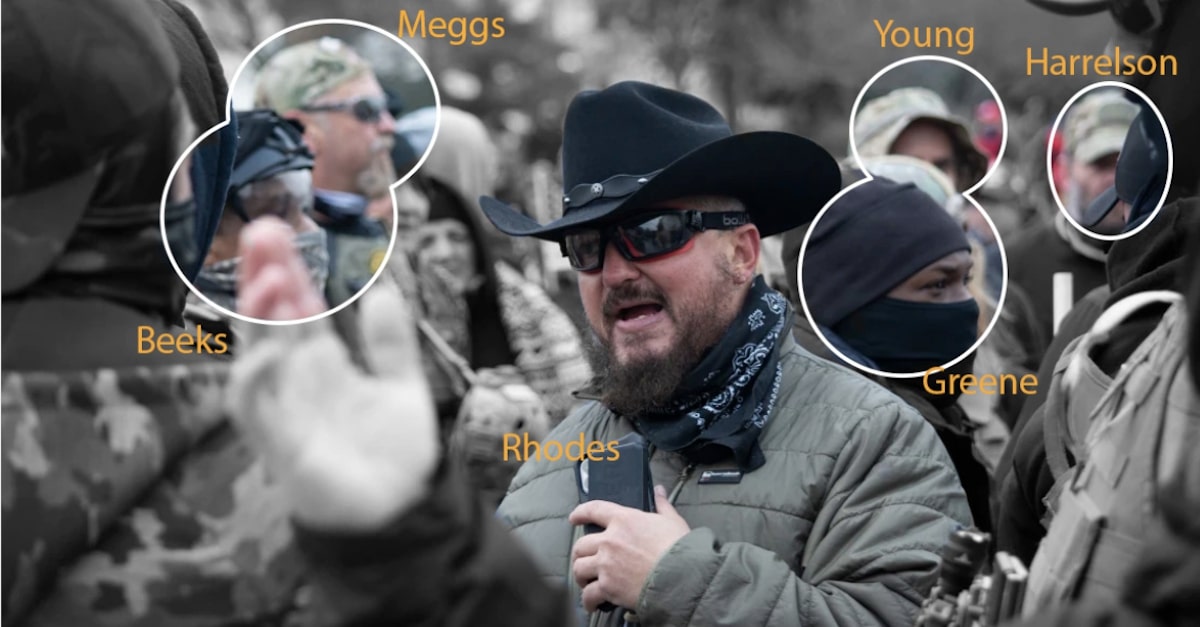 Oath Keepers founder Stewart Rhodes and associates are identified in this exhibit entered into evidence at his seditious conspiracy trial. (Photo via DOJ)

The Oath Keepers’ compulsive chatter about “civil war” did not represent the “ranting and raving of old men at a barber shop,” but the “real” and “sincere” planning of extremists committed to stopping the lawful transfer of power, a prosecutor told jurors during the seditious conspiracy trial’s closing arguments.

“We are not getting through this without a civil war,” Rhodes wrote. “Prepare your mind body and spirit.”

Major media outlets had not yet called President Joe Biden’s victory and wouldn’t do so for two more days. The thoughts of Oath Keeper Kelly Meggs, who would ultimately become the Florida chapter leader, turned to violence even earlier.

Throughout U.S. history, there have been bitterly contested elections, but they typically end with the loser respecting the peaceful transfer of power. That’s not what the Oath Keepers did, the prosecutor noted.

The day that it became clear the Donald Trump lost reelection on Nov. 7, 2020, Rhodes started talking to his Oath Keepers about the “Serbian plan,” a model that included storming the seat of government. Throughout the trial, prosecutors outlined the plan with internal communications from the Oath Keepers from the encrypted app Signal, the video app GoToMeeting, the walkie-talkie app Zello, and reams of heated social media communications.

One of the men privy to the GoToMeeting huddles was government witness Abdullah Rasheed, who said what he heard alarmed him.

Other Oath Keepers members weren’t terrified; they were amped up, the prosecutor noted.

“This is the moment we’ve been waiting for,” Oath Keeper Jessica Watkins wrote. 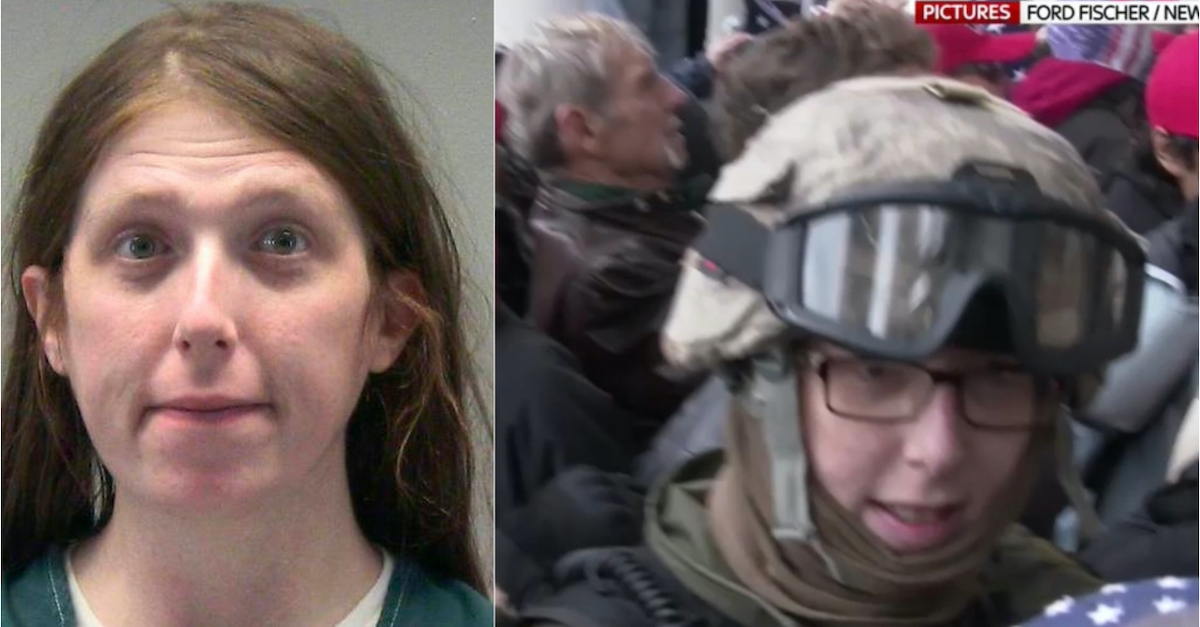 The mugshot of Oath Keeper Jessica Watkins is seen on the left, and on the right, she’s seen in military gear at the Capitol in a Sky News screengrab.

A transgender woman, Watkins freely acknowledged to jurors during her testimony that she believed Biden’s election was an existential threat. She said that she compulsively watched the broadcasts of conspiracy theorist Alex Jones some five or six hours a day and believed that Biden would invite the United Nations to forcibly vaccinate the populace. Her communications with other Oath Keepers, highlighted by the prosecutor during summations, reflect this.

“We already have got our neck in the noose,” Watkins wrote. “They’ve just got to kick the chair out.”

Another defendant, Kenneth Harrelson, deleted most of the messages from his phone.

Oath Keepers associate Thomas Caldwell allegedly helped lead so-called quick reaction force, which gathered at a Comfort Inn in Alexandria, Va., with large numbers of firearms. Prosecutors say that the QRF, as it was known, planned to ferry those weapons by boat over the Potomac River if necessary, and that Caldwell’s own messages quoting Henry Wadsworth Longfellow reflect this.

Caldwell vigorously denied any such plans on the witness stand and downplayed his more violent messages as the “poetic justice” of an amateur screenwriter.

The prosecutor scoffed at such claims.

“I don’t even know where to begin with Defendant Caldwell’s testimony,” Rakoczy said, calling much of it “palpably absurd.”

If the jury agrees, the prosecutor said that they must ask why he lied.

“Perhaps it’s because the truth is so damning,” Rakoczy said.

Though one of the marquee trials on the Jan. 6th docket, the Oath Keepers case does not focus exclusively on the breach of the Capitol, and Rakoczy emphasized that jurors do not even need to find that entering the Capitol was premeditated to convict them of seditious conspiracy. She argued that the Oath Keepers seized upon the opportunity of the breach to advance their long-term goal of stopping the transfer of power by force.

Much of the government’s case post-dated the Jan. 6th attack, and it capped off with blockbuster testimony from Jason Alpers, who testified that Rhodes wanted to make him an intermediary to pass on a message to Trump to invoke the Insurrection Act. Their meeting, secretly recorded by Alpers, took place in Texas on Jan. 10, 2021, and Rhodes did not deny asking him to pass that message to the then-departing president.

Indeed, on Jan. 6th itself, Rhodes wrote a message that he believed the breach of the Capitol was only a step. He compared the Capitol invaders to the nation’s founders right before the rebellion: “They didn’t fire on them, but they street fought. That’s were we are now. Next comes our ‘Lexington.'”

Unpacking that quotation, the prosecutor noted that it suggested that Rhodes didn’t view Jan. 6th as the opening shot of the revolution — but a step toward it.