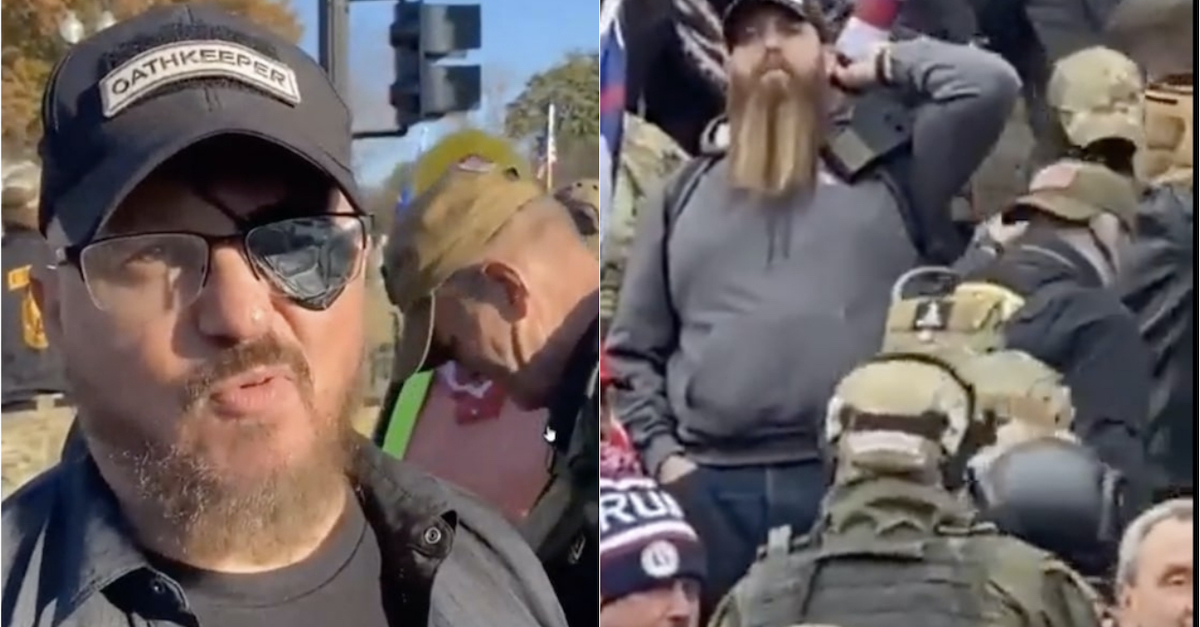 Exhibits from the seditious conspiracy trial of Oath Keepers founder Stewart Rhodes and four other of the group’s members have included videos with these still frames from his interview — and a procession of members at the Capitol in “stack” formation. (Images via DOJ)

After contracting COVID-19 this past weekend inside a jail in Alexandria, Va., Oath Keepers founder Stewart Rhodes waived his physical presence in federal court on Tuesday for law enforcement witnesses called by prosecutors.

Rhodes attended the proceedings virtually via a video link, and he intends to return — after jailhouse officials provide medical clearance — once the government calls more cooperating witnesses from within his organization who admitted to participating in the Jan. 6th attack on the U.S. Capitol. Some of those members pleaded guilty to the top charge against Rhodes and his co-defendants: seditious conspiracy, a rarely charged statute punishing plots to “overthrow, put down, or to destroy by force” the U.S. government or the execution of its laws.

Rhodes’s lawyers previously said that their client was willing to be absent for government witnesses they view as “insignificant,” due to their lack of personal interaction with him. Those witnesses, however, have authenticated encrypted messages, videos and other damaging pieces of evidence to Rhodes and his co-defendants.

Before trial, Judge Mehta skewered a “bombastic” legal brief filed by Geyer trying to prevent his client from being administered a COVID-19 vaccine behind bars. The jailhouse had no requirement that would have forced his client to be vaccinated, but according to Judge Mehta, that did not stop Geyer from expounding upon his “fringe” ideas about the vaccines, about which he invoked Holocaust imagery.

Geyer’s questioning of ex-FBI Agent Drew provoked similarly tense exchanges with the judge, who urged the attorney repeatedly to speed up his cross-examination. As he did with previous witnesses, Geyer pointedly referred to violent rioters as “provocateurs,” in supposed contrast to his client. He’s also repeated the idea that a third-party opened the Capitol doors.

Though Rhodes’ defense attorneys questioned the evidence regarding their client’s state of mind, prosecutors noted that the Oath Keepers leader left little mystery about it in print. In one exchange on the encrypted messaging app Signal, an unidentified Oath Keepers member named “Jim” wrote on the “DC OP” channel: “Congress given gas masks and are trying to get out.” Rhodes coldly replied: “Fuck em.”

A different law enforcement witness, ex-U.S. Capitol Police Officer Ryan Salke, demolished the notion that rioters were allowed inside the building. An ex-Marine Corps reservist who’s now a deputy with the New Hanover County Sheriff’s office in Wilmington, N.C., Salke repeatedly testified that the only reason he did not effectuate arrests on Jan. 6th was that the unruly mob made that impossible. 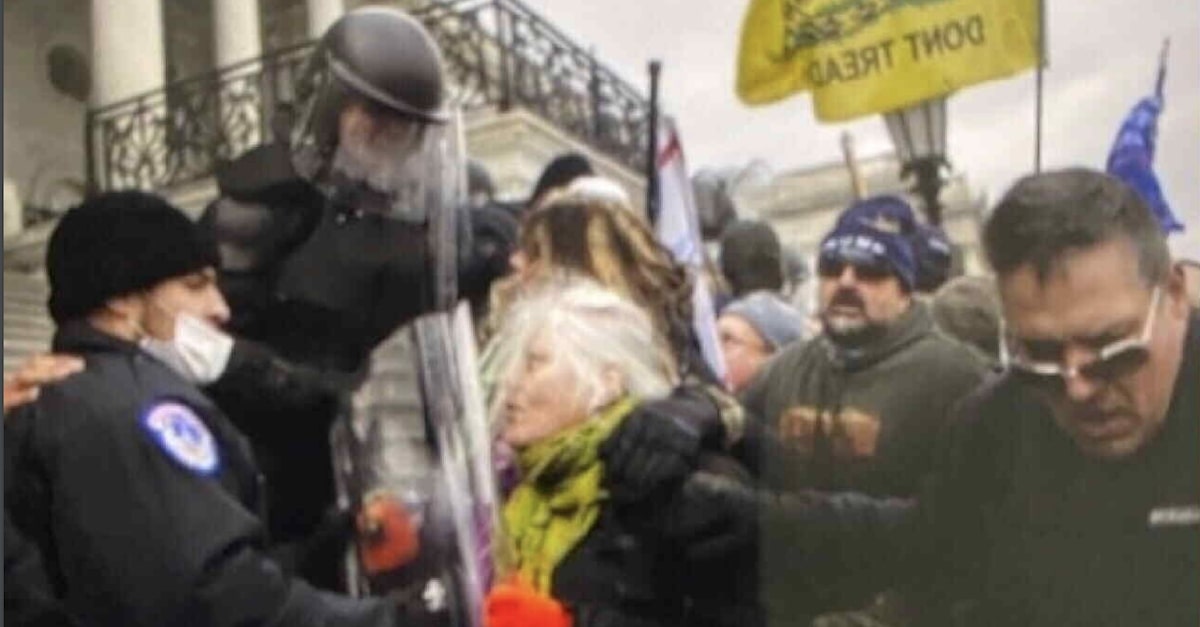 Ex-U.S. Capitol Police Officer Ryan Salke identified himself as the man with the black beanie and white mask in this photograph of his response to the Jan. 6th attack. (Photo via DOJ)

Asked why he didn’t call for additional backup, Salke responded: “Every unit at the Capitol was already being utilized,” adding that the radios were “unusable” because of all of the officers “screaming” on them.

Salke arrived armed at the Capitol with his service weapon, and asked about whether he ever considered removing it from his holster, he acknowledged that there was one such moment.

“A flashbang was thrown at my feet,” he recounted.

Throughout trial, defense attorneys highlighted portions of the footage showing the crowd singing the U.S. national anthem, but Salke quickly dispensed with sentimentalizing the mob.

Oath Keepers members were sparse in the footage Salke reviewed, but he established that they were in the area where his fellow officers were assaulted. As footage showed one targeted sergeant, Salke said: “He just got OC-sprayed, or bear sprayed.” Salke testified that he had never gotten sprayed by a civilian before, and the experience of it for officers is “completely disorienting.”

Often wry, Salke’s testimony captured some of the most famous images of the Capitol breach, including rioters’ chants when pushing against lines of officers defending it.

“They’re doing their little ‘heave ho!’ thing here,” Salke said of rioters in on snippet, referring to their famous chant when painfully pushing some law enforcement officers against the Capitol doors.

In another exchange, Salke was asked whether he remembered an interaction involving a dog.

“Yes, I do,” Salke replied, smiling at the question.

Asked why he smiled, Salke recalled speaking about the strange episode with his family and then reliving it in the video footage.

“I’m looking at this intelligent man who brought his dog with him to a riot,” Salke said, reviewing the footage. “Right now, I’m telling him he’s not the brightest group in the bunch.”

Salke said he worried that the pooch would get “trampled by the vast amount of people.”

When the footage turned to a man who made contact with his torso, the prosecutor asked him how he would normally respond to such a provocation.

“In uniform or not, he would be on the ground, sir,” Salke replied.

Witness testimony continues tomorrow with more law enforcement witnesses, potentially ending with U.S. Capitol Police Officer Harry Dunn. A witness in the debut hearing of the Jan. 6th Committee, Dunn testified about the experience of guarding the Capitol as a Black man. After describing being called the N-word dozens of times, Dunn recalled asking himself that day: “Is this America?”