‘By Any Means Necessary’: Ex-Oath Keepers Recruit Testifies He Took Up Arms and Prepared to Be ‘Tagged with Treason’ to Reverse Trump’s Election Defeat 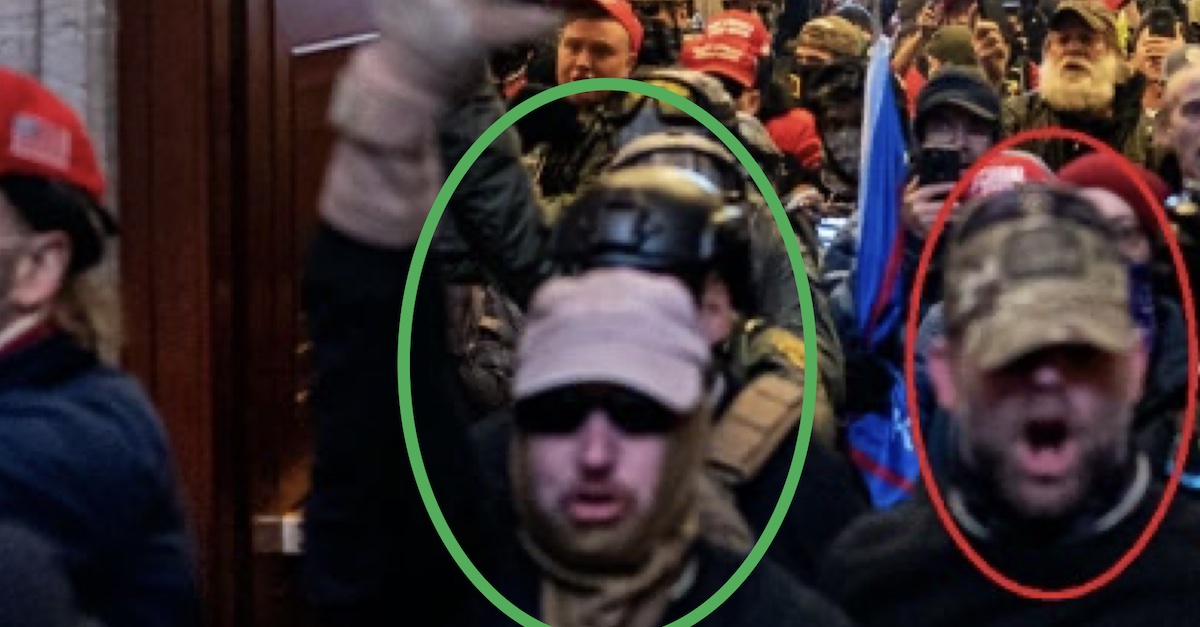 An ex-Oath Keepers recruit who is now cooperating in the seditious conspiracy trial against the group testified on Tuesday that he was willing to take up arms to reverse Donald Trump’s election defeat — and showed the jury his rifle and his pistol to prove his claim.

A Marine Corps veteran who retired at the rank of staff sergeant, Jason Dolan stewed in his disappointment in the 2020 election results when he said a friend told him about the Oath Keepers, an extremist group composed mostly of retired military members and law enforcement. Dolan is now a key witness against its leader Stewart Rhodes and four of its members, and he said that he joined the Oath Keepers’ Florida chapter as an outlet for his then-belief that the election was “stolen” from the former president.

There, Dolan said that he found others like him who shared his beliefs — and were willing to take up arms for it.

“Did you actually take firearms to the D.C. area?” Nestler asked.

The government displayed two of those weapons for the jury.

“How do you know?” Nestler prodded.

“Because I built it,” Dolan replied.

That firearm was his rifle, and after another round of similar questions, the jury was shown another weapon that Dolan identified as his pistol. The jury also received an eyeful of messages Dolan sent and received as a member of the Oath Keepers’ encrypted chat forum.

In the Signal group, titled “OKFL Hangout,” Oath Keepers members from the Florida chapter discussed how they would respond to the announcement of President Joe Biden’s victory.

On Dec. 6, 2020, a member of the chat named DeStokes wrote: “If they sell out there will be no protection to the constitution other than the citizens themselves.”

Dolan could not identify the person behind that moniker, but he said that the sentiment was widely shared.

A user named “OK Gator 1,” whom the government identified as Kelly Meggs, replied: “That would be a very very bad thing,” adding that there would have to be “repercussions.”

Steeling himself for the possibility of taking dramatic action, Dolan wrote: “I have to be mentally prepared for however far I’m willing to go to stand for America, for the Constitution, for the President & for the survival of our ideals.”

The Marine Corps veteran described his reflections of how far he was willing to go to change the election outcome.

“[I]f I’m lucky I get a prison sentence, tagged with treason, or a bullet from the very people I would protect,” Dolan wrote. “Yet I swore to defend this country against all enemies foreign & domestic.”

Dolan was never charged with treason, nor was he executed by firing squad via a military tribunal. Instead, he faced multiple federal felonies in connection with the Jan. 6th attack on the U.S. Capitol — and ultimately, pleaded guilty to conspiracy and obstructing an official proceedings.

Though he theoretically faces up to 25 years imprisonment on those convictions, Dolan’s federal sentencing guidelines under his plea agreement spans between roughly five and seven years. He hopes to receive leniency through the cooperation clause of his plea deal. The agreed-upon statement of his actions that day shows that he brought an M4 rifle and deposited it for the so-called quick reaction force at the Comfort Inn Ballston hotel in Arlington, Virginia.

Prosecutors have said the Oath Keepers’ quick reaction force, or QRF, planned to ferry weapons across the Potomac River at then-President Trump’s command.

Rhodes, the Oath Keepers leader and a Yale-educated lawyer, theorized that Trump would be able to formally deputize them if the former president invoked the Insurrection Act, as some of his close associates urged him to do.

Dolan explained those views on the witness stand.

“We would be working with ‘pro-government forces’ with what we saw as ‘anti-government’ forces,” Dolan testified.

Asked by a prosecutor to “unpack” that statement, Dolan said that he believed the invocation of the Insurrection Act would “militarize the militias” and deploy them against “anti-Trump” forces.

“Asked how the Oath Keepers intended to block the congressional certification of President Joe Biden’s victory, Dolan responded: “By any means necessary: That’s why we brought our firearms.”

Trump never did invoke the Insurrection Act, and the so-called QRF never deployed. None of the indicted Oath Keepers members or leaders faces any charges related to the weapons.

In his guilty plea, Dolan agreed that he and other members of the pro-Trump mob chanted “Treason!” inside the Capitol at lawmakers. He said that the chant was intended to instill fear.

“I hoped that they would be scared of me,” Dolan said, noting that fear is one manner of persuasion. “Maybe they could be scared into doing the right thing.”