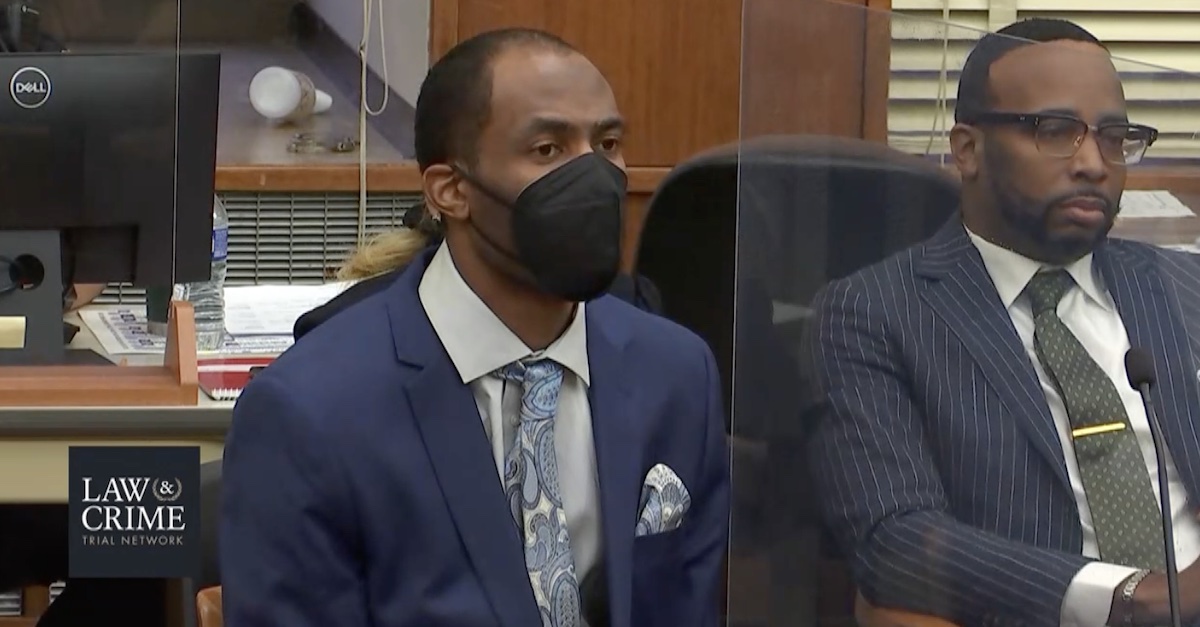 A Wisconsin man was found guilty on Wednesday of first-degree reckless homicide while using a dangerous weapon in the 2020 road rage shooting of a 54-year-old immigration attorney in front of the victim’s wife in Milwaukee.

Theodore Malcolm Edgecomb, a 32-year-old Black man, claimed that Jason Cleereman, who was white, repeatedly used the N-word prior to the shooting. The defense maintained that Cleereman was an aggressor and that Edgecomb protected himself. They argued the surveillance footage showed the Cleereman and his wife following Edgecomb in their vehicle after the initial encounter, which made their client fearful for his life.

Jurors had several options when it came to a verdict, even a charge of first-degree intentional homicide and other lesser included charges. They went with first-degree reckless homicide.

Cleereman was a passenger in the car his wife Evanjelina Cleereman was driving. Edgecomb, who was riding his bike, claimed that the couple’s vehicle clipped his pedal, leg and handlebar. Edgecomb said Cleereman called him the N-word and told him to “get the fuck out of the road.”

Edgecomb claimed the Cleeremans followed him, and that the victim threatened to kill him and lunged at him before the gun “just went off.”

“I took a step back,” Edgecomb testified in his own defense at trial, “and as I step back, it was the reaction from that, the firearm just went off.”

Edgecomb said he pulled his firearm but didn’t have any “intent” at that point. He said Cleereman lunged toward him, he took a step back and the reaction from that..”the firearm just went off.” #TheodoreEdgecomb @LawCrimeNetwork pic.twitter.com/ZPMGwMUDsD

Prosecutors said that Cleereman was, in fact, shot in the head at close range after Edgecomb threw a punch at Cleereman through the car window. Again, he claimed the victim had used the N-word. Edgecomb testified that Ahmaud Arbery’s death “resonated in [his] mind” when he was being followed; he also mentioned the deaths of other Black people, particularly George Floyd and Sandra Bland, to highlight why he carried a gun and why he didn’t want to turn himself in.

But prosecutors said that Edgecomb didn’t act like an innocent man who had acted in self-defense. Rather, Edgecomb, a father, left the scene and fled the state with the gun.

Prosecutor Grant Huebner, for instance, challenged the defendant on fleeing the state and dumping the gun in Indiana. Edgecomb insisted he did not go to law enforcement after killing Cleereman because he feared he would be treated unfairly — even killed — on account of his race. Edgecomb said during direct examination that this fear explained why he gave investigators an alias upon encountering them.

At several moments during his testimony, Edgecomb and the prosecution got into testy exchanges. The defendant repeatedly failed to answer questions with a “yes” or “no,” opting instead to repeat non-responsive statements about protecting himself.

Cleereman’s family has staunchly denied Edgecomb’s claims that the victim used the N-word. Evanjelina Cleereman testified last week that her husband did not use the racial slur, and that it was Edgecomb who started it all by suddenly veering into their lane.

“Were you talking to me?” Edgecomb said, according to her.

“Yes,” Jason Cleereman is said to have replied (the defendant claimed he said “Yes, n****r”).

“And then the man on the bike violently punches my husband in the face,” Evanjelina Cleereman testified.

Evangelina Cleereman said Edgecomb shot her husband and then looked at her, leading her to believe he was contemplating shooting her as well.

After the shooting, Edgecomb left with the bike down nearby stairs.

Edgecomb’s defense lawyer B’Ivory Lamarr said during closing arguments that the prosecution didn’t prove anything beyond a reasonable doubt and only showed jurors “theories” about what happened.

Lamarr said this was a “rare” case that is “precedent setting.”

“This time, there’s an African American man who is now using self-defense against a Caucasian man. You don’t see that everyday,” Lamarr said. “And [Cleereman’s] not just anybody. He’s somebody that’s well-respected in this community and has been referred to by many as a prominent immigration lawyer.”

Edgecomb, who pleaded guilty before trial to bail jumping charges, admitted on the stand that he should not have had a gun on him because of pending, unrelated criminal cases at the time for felony domestic battery and first-offense drunken driving with injuries.

Sentencing was set for April 8.