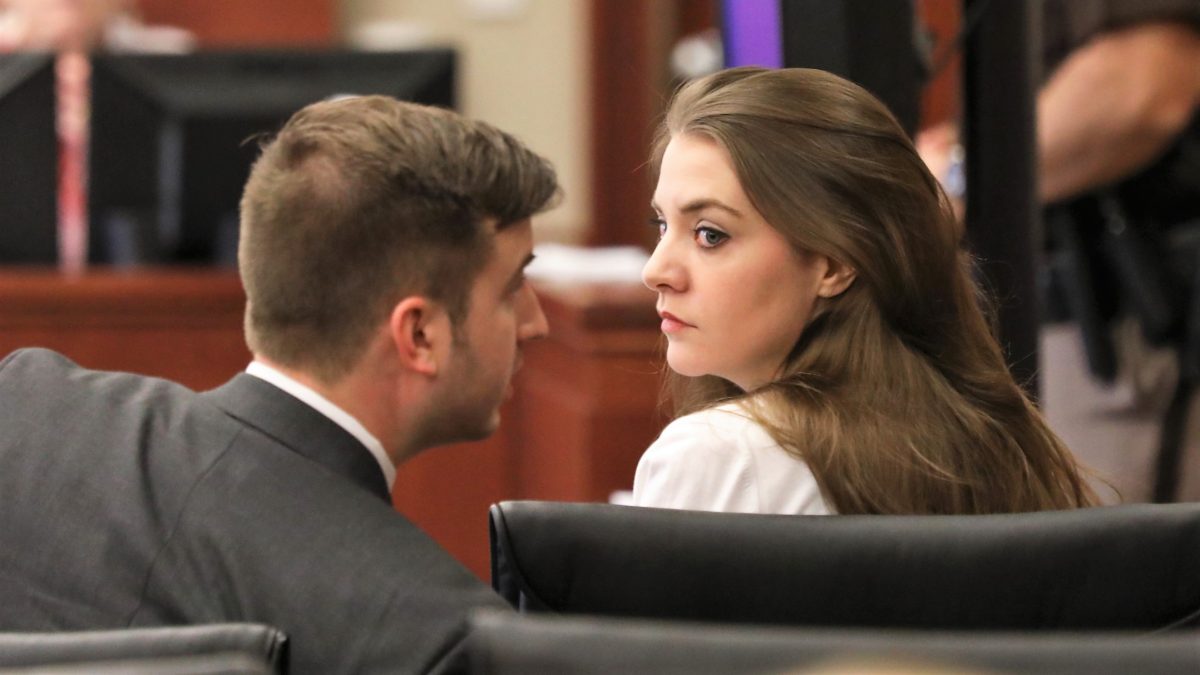 Opening statements are complete in the murder re-trial of Shayna Hubers. She is the northern Kentucky woman accused of shooting and killing her boyfriend, Ryan Poston, an attorney. Hubers is accused of shooting Poston six times on October 12, 2012, including in the face. Authorities say Hubers later said Poston was vain and that she was giving him the ‘nose job’ he wanted.

Hubers was convicted at a first trial. She is being re-tried because a juror in her first trial was discovered to have a felony record.

Hubers is charged with murder, a capital offense.

Opening statements began at 9:45 a.m. The defense and the prosecution painted wildly different pictures of the relationship between Hubers and Poston.

Prosecutor Kyle Burns said Poston was alive for each of the six shots Hubers “pumped into his body.” Burns then pointed to the locations on his body where each of the bullets struck Poston’s body. He said Poston died alone on the carpet of his own condominium floor with no one by his side other than the defendant. 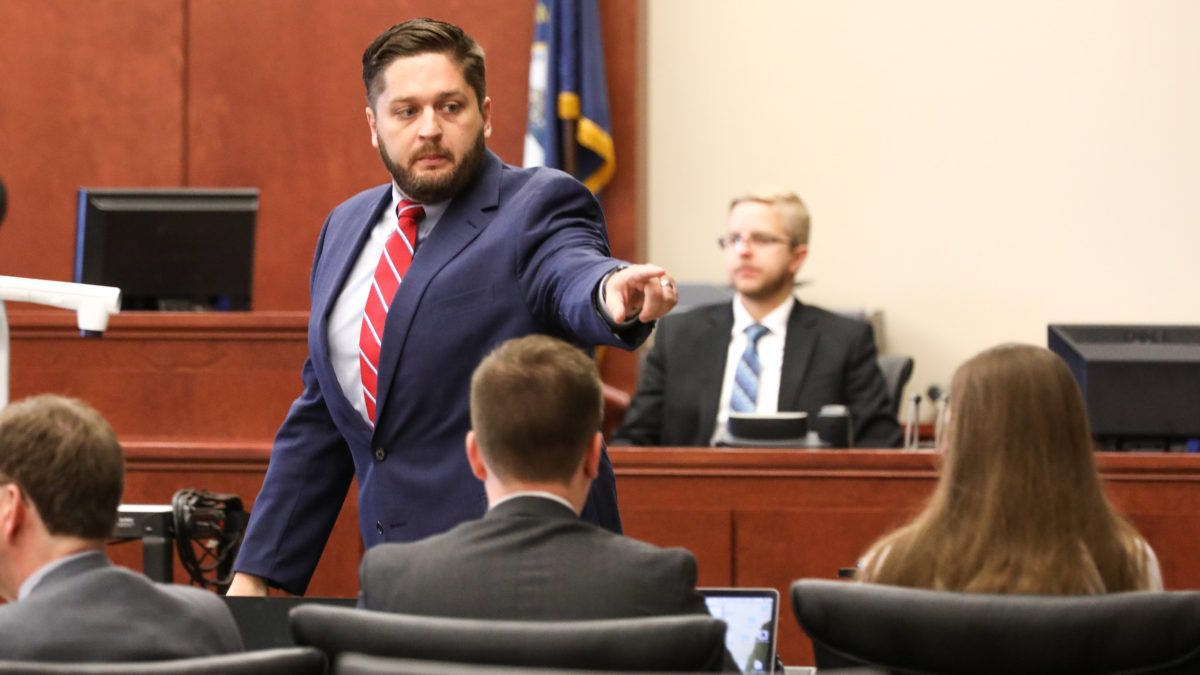 “She is jealous, she is calculated, and she is manipulative . . . will go to the ends of the earth to get her own way,” Burns said of Hubers. “She wanted Ryan Poston.” Meanwhile, “he was not committed to that relationship . . . the deep attachment she had to him was not mutual . . . and Shayna knew that,” Burns said.

Countering an expected argument from the defense, Burns argued the following:  “One thing Ryan was not was abusive. For much of the time their arrangement went on, Ryan [Poston] placated Shayna,” Burns told jurors.

“When faced with rejection by Ryan, you will see how relentless she was to keep him. Losing him was not an option. She sent him hundreds of text messages . . . she called him repeatedly,” Burns said. She “coerced others” to contact Poston and showed up unannounced at his home. The more Poston created distance, the more she got behind the wheel and “flew up” the Interstate to see him. “Ryan would cave to her persistence,” Burns told jurors.

When Poston changed his professional focus, he started pulling away from Hubers, prosecutor Burns argued. “On the day of the murder, it was becoming more and more apparent to Shayna that Ryan was moving away from Shayna . . . her desperation was growing,” he argued.

On the day of the shooting, Poston went home to change for a date with another woman — “everything Shayna feared:  tall, beautiful, and blonde.” Poston wanted to finally break up with Hubers to create “a new chapter in his life that didn’t include Shayna, and she knew that . . . she begged for food . . . she begged for sex,” Burns argued. Then, she tried to put Poston on a guilt trip. She pulled everything in her book, Burns argued, until she finally “pulled the trigger” and killed Poston.

“She shot and killed Ryan Poston and played like it was self-defense,” prosecutor Burns told jurors. Burns called the murder “conscious and intentional.”

Burns also said jurors would be able to get past Hubers’ “facade of sweaters and makeup” when they hear from jail cellmates who spoke with Hubers behind bars. Burns, the prosecutor, asked jurors to listen to those witnesses carefully despite their own misdeeds. The jailhouse snitches will help jurors understand “the real reason Poston’s family had to lower him into the ground at age 29,” Burns said.

Burns characterized the case as one involving the “tenacious” pursuit of a man who did not reciprocate Hubers’ feelings. Messages which “cannot be unsent” and words “which cannot be unsaid” will tell the story of the relationship, Burns argued to jurors. “The messages she sent and the words she said” will explain to jurors what happened. “Losing him was not an option,” he argued.

Burns said Hubers shot Poston, then walked around the table in his condominium and continued to shoot Poston in places Hubers knew would kill him.

“On the night that [Poston] was killed, Ryan and Shayna had one thing in common:  they both had done what each was yearning to do. For Ryan, it was to break free of her. For her, it was not to let him go,” Burns concluded.

The defense’s opening statement began at 10:12 a.m. after rearranging monitors for the jury to view exhibits. 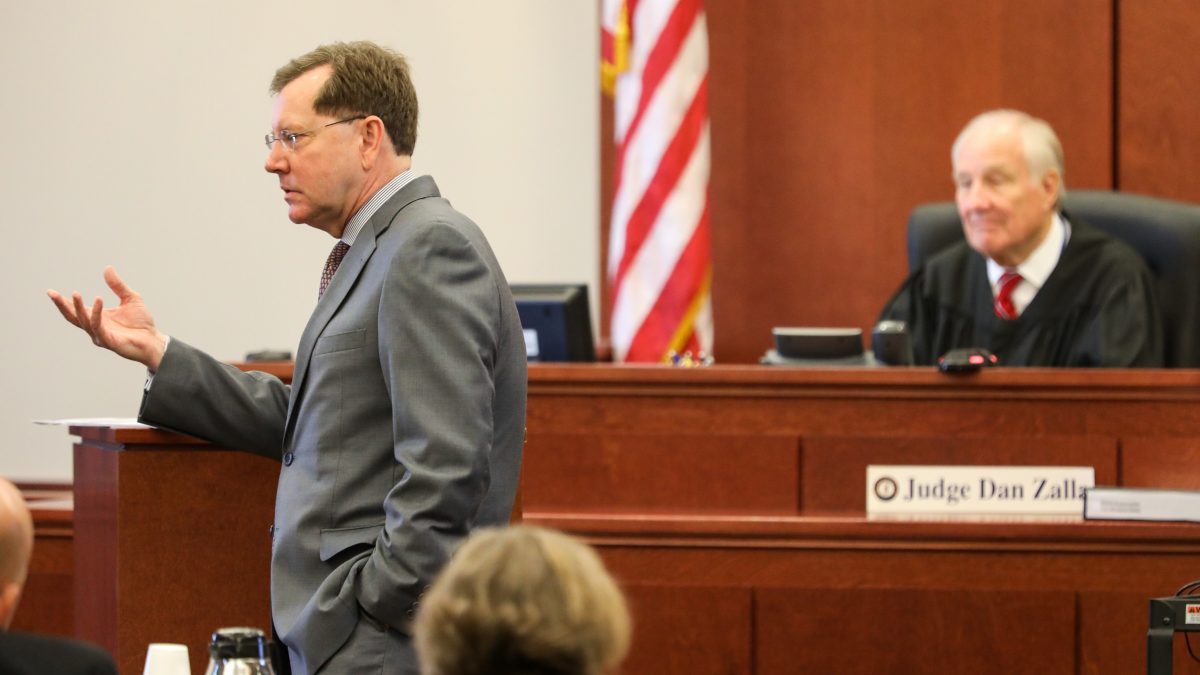 Eldridge argued that the relationship began when Poston added Hubers as a friend on Facebook. Hubers said Poston was “gorgeous.” Poston said Hubers’ “body was incredible.” The two eventually met on Hubers’ birthday at a bar in Lexington, Kentucky in April 2011. Hubers was 19 years old at the time. She used a fake ID. During that meeting, the defense said Hubers and Poston “talked some,” then parted ways. They eventually met again. Poston stayed overnight. The defense said Poston became “physically and sexually violent” on his very second meeting with Hubers. Hubers had to lock Poston out of her apartment, the defense said. It was a “drama-filled, violent encounter.” Hubers continued the relationship due to her immaturity, the defense argued.

Defense attorney Eldridge said the Hubers family was religious. Shayna Hubers’ parents were strict. Her mother was a teacher and her father was a carpenter. Conversely, Poston came from an affluent home. His father was a successful Fortune 500 advertising executive. The contrast was also apparent in the schooling the defendant and the victim received growing up. Hubers attended public schools. Poston attended boarding schools overseas.

The defense said Hubers was sexually assaulted during high school. She didn’t report it, the defense argued. The defense said this so-called “childhood sexual abuse” affected Hubers’ relationship with Poston. Hubers realized during their relationship that Poston wasn’t faithful. During the relationship, Poston wanted Hubers to be thinner and to get breast implants. Poston was upset that Hubers could not orgasm, the defense argued. Hubers went so far as to get a so-called “G-shot” injection which would purportedly increase her sexual response. The scenario caused increasing relationship tension, defense attorney Eldridge told jurors.

The defense further said Hubers suffered from borderline personality disorder which caused her to have “intense” reactions to situations. “Those conditions are associated with numerous problems with interpersonal relationships. They tend to be overly intense, emotional immature, [and] plagued by problems with trust,” the defense said.

With regards to Hubers and Poston, the two “were at different stages of life. He was a practicing lawyer. She was an undergrad,” the defense said. The defense described Hubers as talkative and social. Poston was increasingly withdrawn.

Hubers “wanted a real relationship,” while Poston “wanted to be left alone,” Eldridge argued. Hubers had keys, access to Poston’s condominium, and would travel to Poston’s home to do chores for him the way a supportive partner would. Meanwhile, Poston would merely want to have sex with Hubers and then effectively kick her to the curb, the defense argued. Hubers remained confused about the nature of the relationship. Poston increasingly called Hubers “crazy.” During one encounter, Poston allegedly picked Hubers up and threw her into a hallway, the defense said.

“He wants sex from her to relieve his stress,” Eldridge said. Poston even ordered Hubers to talk “25% less,” he added. Hubers agreed. “This is not psychologically healthy,” Eldridge told jurors. Yet Hubers continued the relationship, bringing Poston food, cleaning his condominium, and even asking permission to be around him. Poston told Hubers to text him, even if she was in the same room, because he told her that “her voice annoyed him,” Eldridge argued.

Eventually, after Hubers bought a new dress for a date, a fight broke out. Poston “lit into” the Hubers family due to the class differences between the families. Yet the two went on to have sex that night, Eldridge, the defense attorney, said. Hubers couldn’t sleep through the night. She woke up with chest pains, became scared, and called her mother. It was an “awful, foreboding feeling,” Eldridge argued. Poston did not comfort her, Eldridge said. Hubers had never called her mother during the middle of the night. Her mother drove to the Poston condominium to pick her up. Hubers rested at her mother’s home and the two spent the day together.

Eventually, Hubers went back to Poston’s condominium. Poston arrived later in a “dark mood” and “upset,” the defense continued.

“He lights into her verbally; critical of everything there is to be critical of her about:  her mother, her family, her education, where she’s from, her appearance. Violent comments to her. Verbal assault. There is no other way to describe it,” Eldridge told jurors. “She doesn’t understand what he wants . . . she had just been to his parents’ home less than 24 hours before.”

“His eyes were frightening, scary, dark. He bursts out the door and physically attacks her . . . slams her arm into the door . . . this is an attack where he’s throwing her around onto a couch or a carpeted floor,” Eldridge described the encounter.

Very shortly after that, Hubers was interrogated at the local police department.

“We believe the evidence will show [Hubers] is not guilty of this crime . . . she was acting under extreme emotional distress,” Eldridge concluded. He asked jurors to consider the “psychological background” the case presented.

The defense opening statement concluded at 10:55 a.m. The judge called a 15-minute break. 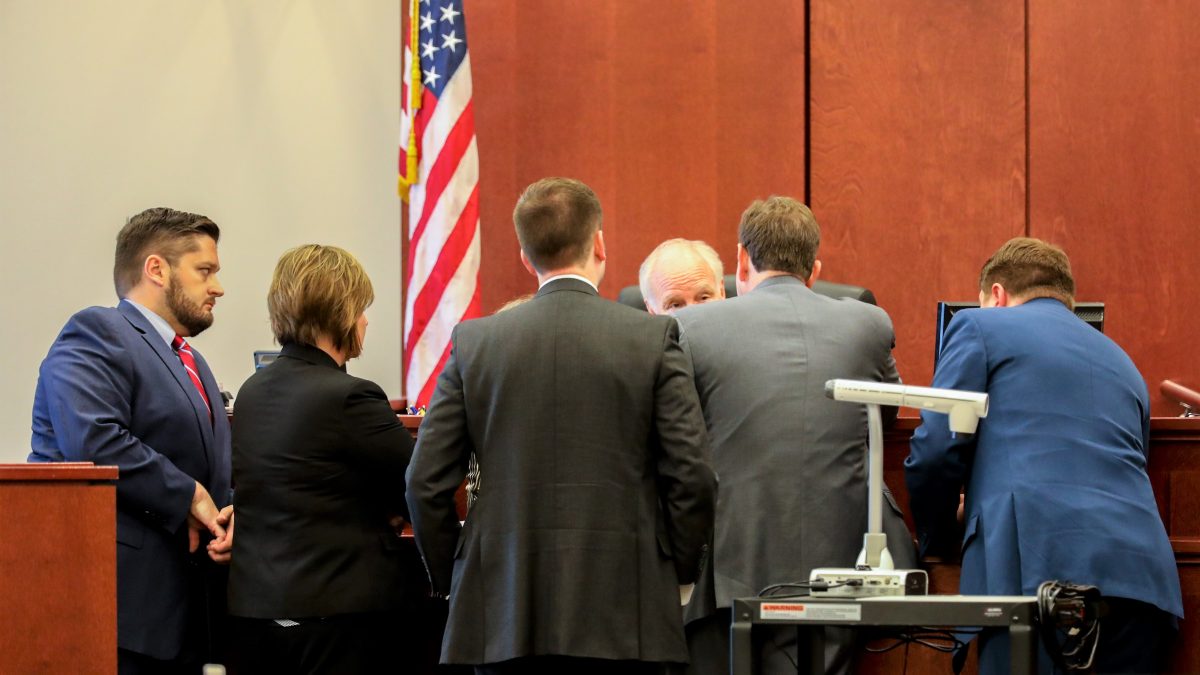 Though cameras are present for the trial, the judge in the case, Daniel Zalla, has prohibited live broadcast coverage of the case. He has also banned real-time reporting, including Tweeting, from the courtroom and from an adjacent media room. The judge has furthermore placed strict limits on the amount of testimony which can be played back during broadcasts. Under an order dated January 10th, the judge banned “[t]he broadcasting of the entire or large portions of the proceeding.” The order only allows the broadcasting of “short portions or ‘snippets'” of the case. Generally, the Law&Crime Network provides live coverage of cases gavel-to-gavel.

[Images via Phil Didion/Pool/The Cincinnati Enquirer.]
[Editor’s note:  this piece has been updated with additional photos.]