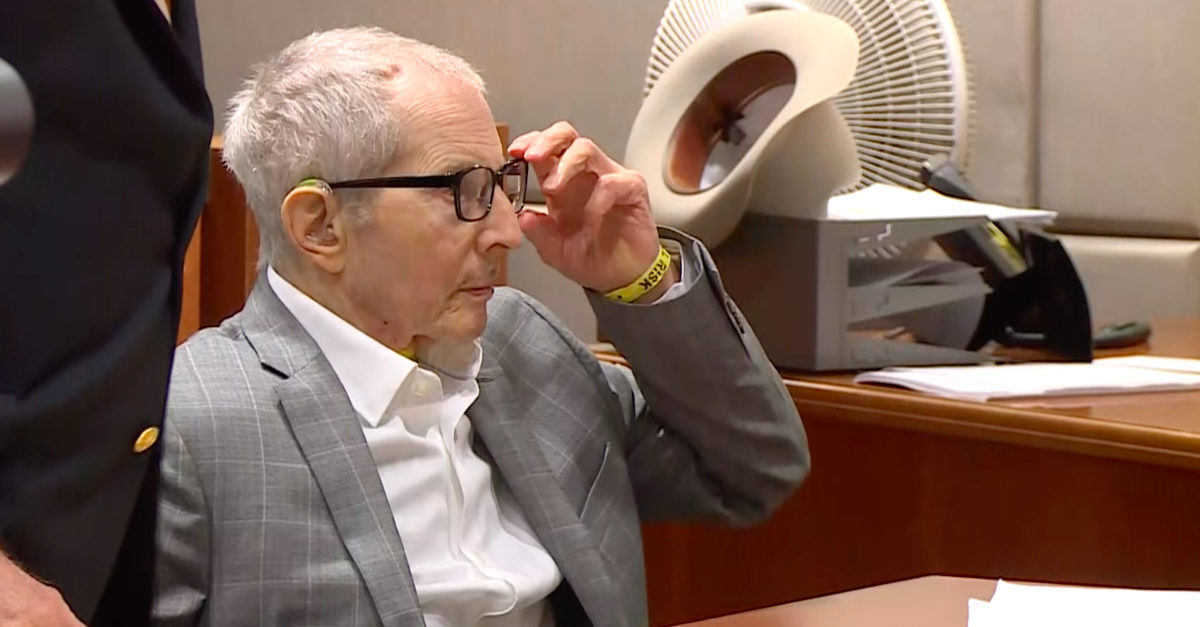 Disgraced real estate magnate Robert Durst, 76, appeared in court Tuesday wearing a “fall risk” bracelet, an indication that the accused murderer’s health may have taken a turn for the worse behind bars. Durst is currently on trial for the murder of his friend Susan Berman, who was killed in her Los Angeles home in 2000.

Prosecutors allege that Durst killed Berman to prevent her from going to the police and implicating him in the still-unsolved disappearance of his first wife, Kathleen Durst, in 1982. Durst was previously charged for and acquitted of a separate murder in 2003.

The latest charges against Durst stem from his participation in HBO’s Emmy-award winning documentary series The Jinx, which chronicled Durst’s torrid past. During the final episode of the documentary, Durst excused himself from the room where the documentary crew was filming to use the bathroom, but apparently forgot his microphone was still on. Though not seen on camera, Durst appeared to confess to killing Berman and others, as he could be heard saying, “What the hell did I do? Killed them all, of course,” and “there it is, now you’re caught.” Durst was arrested on the same day that the final episode of The Jinx aired.

During Tuesday’s hearing, Durst’s attorneys made two distinct arguments before Judge Mark E. Windham. First, they claimed that the Magistrate judge relied on “conditional examination evidence” and “1390 evidence,” known as “forfeiture by wrongdoing,” to form the basis of the holding order against Durst. Under California’s criminal code, Section 1390 is an exception to the hearsay rule of evidence which allows for an individual’s statement to be admissible if that statement “is offered against a party that has engaged, or aided and abetted, in the wrongdoing that was intended to, and did, procure the unavailability of the declarant as a witness.”

The second argument was that the state put forth insufficient evidence for “lying in wait” special circumstances. Such circumstances refer to the premeditated act of hiding and waiting for an individual with the intent to kill or inflict serious bodily harm on that person.

Durst’s trial had originally been scheduled to begin in September, but was pushed back at the defense’s request until January.

As you can see around the 4-minute mark of the video, it appeared difficult for Durst to stand up.