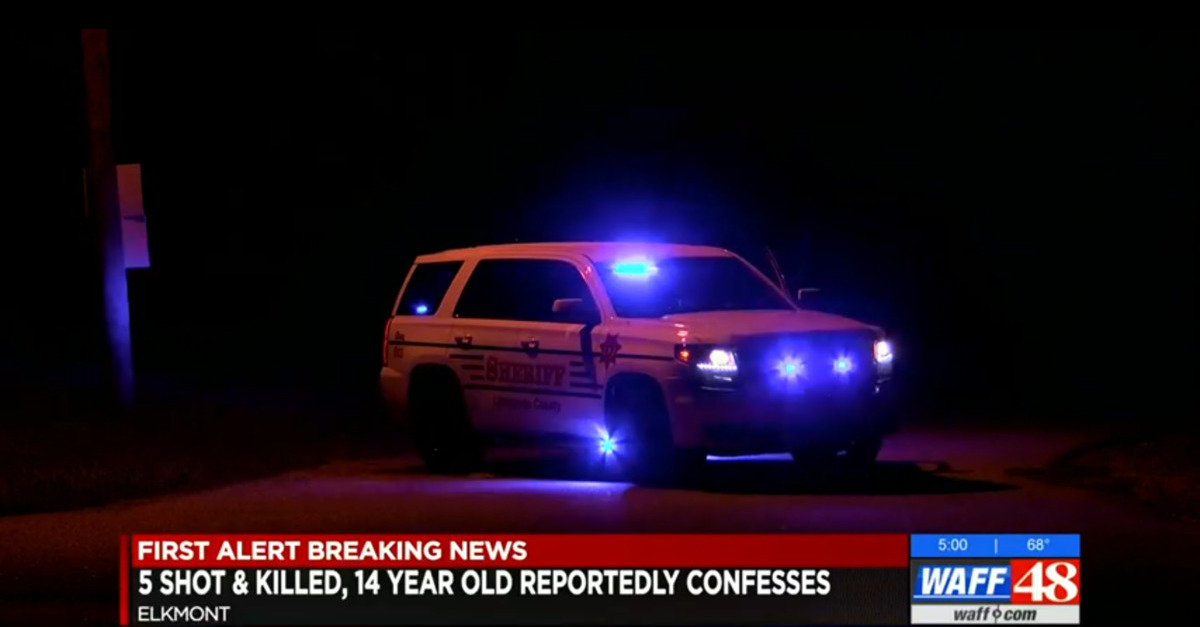 A 14-year-old boy allegedly admitted he was responsible for killing multiple family members in Elkmont, Alabama after initially calling local police and saying he had heard gunshots upstairs in his small town home.

According to local NBC affiliate WAFF, the unnamed teenager confessed to killing five members of his family at around 10:30 or 11:00 p.m. on Monday night. At around 1:15 a.m., the boy called authorities–at first telling them he was in the basement while the carnage unfolded in Limestone County.

Deputies with the Limestone County Sheriff’s Office located in nearby Athens, identified the victims as the teenager’s 38-year-old father John Sisk, his 35-year-old stepmother Mary Sisk, his 6-year-old brother, 5-year-old sister and a younger brother who was only 6 months old.

Authorities are not currently speaking to or publicly speculating about the confessed killer’s potential motive.

Limestone County Sheriff Mike Blakely provided news of the boy’s confession to local media at around 3 a.m. after investigators apparently noticed several discrepancies between the boy’s statements which prompted a round of interrogation. Soon after the interrogation, however, the 14-year-old apparently buckled and admitted that he was the one behind the killings.

According to police, the shooting was carried out by way of an as-yet-unidentified 9mm handgun–which the boy helped investigators locate after confessing to the crime. The gun was apparently illegally in the residence, police say.

The boy himself appears to be uninjured but was taken to a children’s hospital in Birmingham. One adult and one of his siblings were discovered alive and in critical condition by sheriff’s deputies who arrived on the scene. They were immediately flown to a different hospital in Huntsville. Ultimately, however, both initial survivors succumbed to their injuries as well.

The community left behind by the tragedy reeled at the news.

“Please be in prayer for our school and community,” reads a brief post issued by the Elkmont High School on Facebook. “We will have extra counselors at school today.”

Early Tuesday evening, the boy’s stepmother, Mary Sisk, was reported to be a teacher at local Middle Gap Middle School, according to Huntsville City Schools.

We are heartbroken to learn of the tragedy involving one of our teachers, Mary Sisk, and her family. Our thoughts and prayers go out to the Sisk family and we ask everyone to remember them during this difficult time. The district will help Mountain Gap Middle School this week with additional counselors and other resources for any students and staff who need support during this time.

The broader education system in the area offered help for those affected by the horrific incident as well.

Sheriff Blakely later told media, “this community has got some healing to do.”