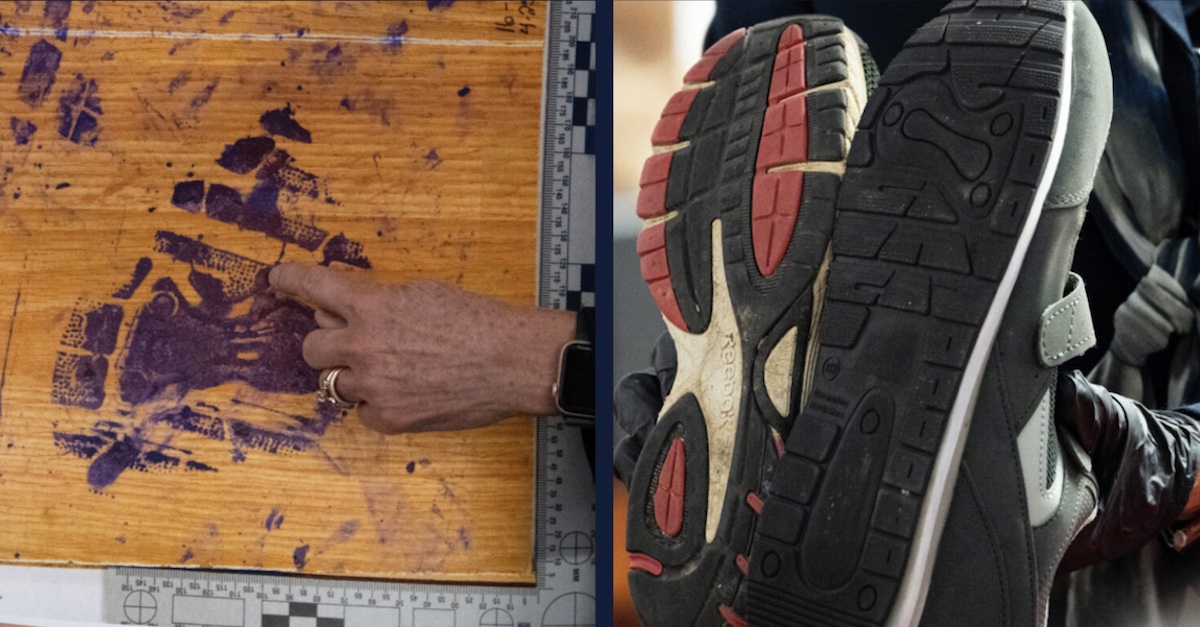 Suzanne Elliott, an Ohio Bureau of Criminal Investigations analyst who in 2016 was a trace evidence examiner, testifies in the trial of George Wagner IV, Tuesday Sept. 27, 2022 in Pike County Common Pleas Court in Waverly, Ohio.

Nearly four years after prosecutors revealed their theory that members of the Wagner family wore gym shoes purchased from Walmart to carry out the murders of eight members of the Rhoden and Gilley families, those shoes and the impressions they left were shown to a jury in Pike County, Ohio.

The evidence was presented in the trial of George Wagner IV, who has pleaded not guilty to the April 2016 slayings.  Prosecutors allege he conspired with his mother Angela Wagner, father George “Billy” Wagner III and younger brother Jake Wagner to carry out the murders so they could have sole custody of the daughter Jake shared with Hanna May Rhoden, one of the victims.

The shoe impressions and the purchase of the shoes were one of the first pieces of evidence that linked the Wagners to the homicides, prosecutors have said.

Suzanne Elliott was a trace evidence examiner for Ohio’s Bureau of Criminal Investigation in 2016 when the shoe impressions were collected from the Rhoden homes. Elliott told the jurors Tuesday that it’s best to cut out a piece of flooring where an impression is left in order to analyze it.

Elliott said she found shoes at a Walmart store in an “a ha!” moment. She said the shoes had the same pattern as the impressions left at the crime scenes. They are an Athletic Works brand with velcro straps and Elliott said she recognized the pattern immediately.

BCI agents have said they have surveillance video of Angela Wagner purchasing the shoes days before the murders. They have also said they found the receipt for the shoes in her belongings. In opening statements, special prosecutor Angie Canepa said that Angela Wagner told them in her proffer that she knew she had given agents a bad answer about the shoes when they questioned her about them in Montana in 2017. Wagner told them George and Jake didn’t like the shoes so she threw them in the trash.

Elliott’s testimony was interrupted Tuesday morning when court adjourned suddenly without explanation. Prior to Elliott’s testimony, firearms examiner Matt White from Ohio BCI testified about his examination of shell casings found at the crime scenes where Chris Rhoden Sr. and Gary Rhoden were murdered. He said the casings were fired from the same Glock .40 caliber 2nd generation hand gun.