Video of Kyle Rittenhouse Reaction to Not Guilty Verdict

Kyle Rittenhouse, 18, collapsed upon hearing that jurors acquitted him of murder and all other charges he faced in the Aug. 2020 shooting in Kenosha, Wisconsin that killed Joseph Rosenbaum, 36, and Anthony Huber, 26, and injured Gaige Grosskreutz, 27.

As seen on video, Rittenhouse collapsed at the defense table, and attorneys Natalie Wisco and Corey Chirafisi consoled him, helping him get back into his seat as his knees appeared to buckle. Attorney Chriafisi and Rittenhouse then embraced. 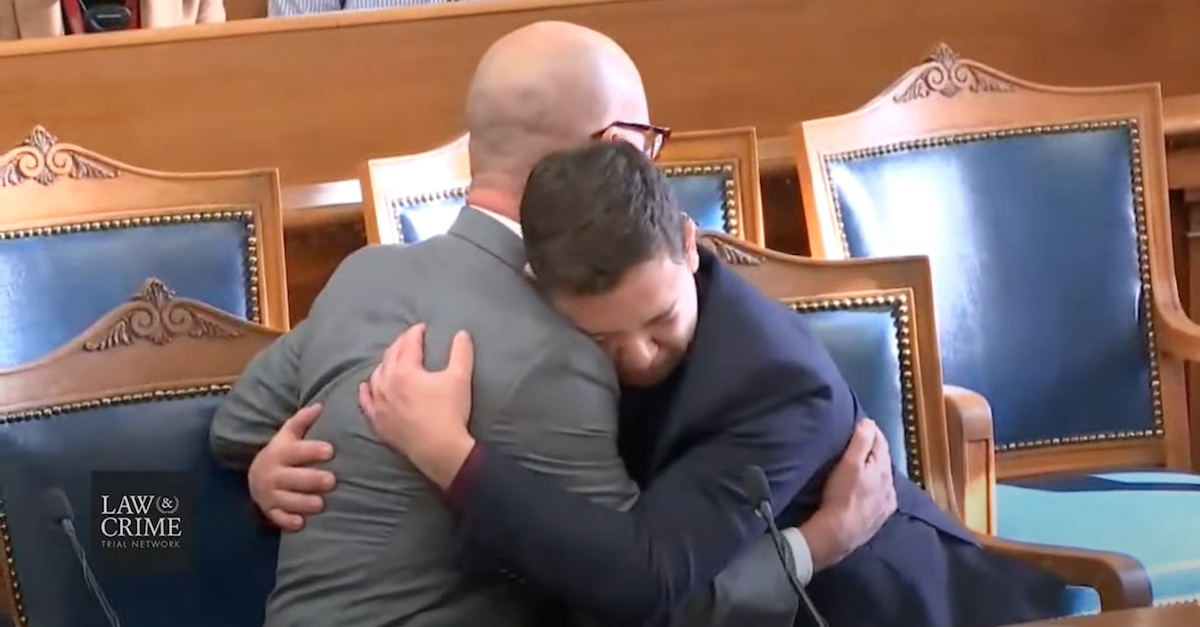 Not guilty on all counts. #KyleRittenhouse becomes tearful and collapses. His mom, Wendy, and other family are crying. @LawCrimeNetwork

Attorney Mark Richards said exactly one week ago that Rittenhouse has post-traumatic stress disorder. Rittenhouse broke down on the stand during testimony in his defense, sparking widespread reaction and debate online over his sincerity.

The Illinois native has said he was in Kenosha, Wisconsin, for lifeguard work when people began demonstrating in response to the police shooting of local man Jacob Blake, who is Black. Protests spiraled into property destruction and violence. Armed men took to the streets, they said, to protect property from rioters. Rittenhouse, a teen armed with an AR-15 rifle, joined them and held himself out as a medic. Rosenbaum ambushed him, the defense said, and Rittenhouse shot the man to protect himself. Nearby protesters, including Huber and Grosskreutz, attacked Rittenhouse, not understanding what actually happened, his defense maintained. Again, Rittenhouse, then age 17, opened fire.

Prosecutors argued that Rittenhouse was looking for trouble that night and found it. He was not even a certified EMT, Assistant District Attorney Thomas Binger said. Prosecutors credited Huber, Grosskreutz, and another unknown man called “Jump Kick Man” in court with bravely confronting who they believed to be an active shooter. “Jump Kick Man” has since been identified as Maurice Freeland, 39.

He was operating under a sense of self-aggrandizement, prosecutors insisted.

In addition to finding Rittenhouse not guilty of homicide and attempted homicide charges, jurors acquitted Rittenhouse on two counts of first-degree recklessly endangering safety in regard to Jump Kick Man and also Daily Caller video editor Richard McGinniss, the latter of whom was near the Rosenbaum shooting.

The Law&Crime Network’s Angenette Levy reports that family members of Huber and Rosenbaum were crying and holding hands.

Families of those killed are crying. And holding hands. @LawCrimeNetwork #KyleRittenhouse

“There was no justice today for Anthony, or for Mr. Rittenhouse’s other victims, Joseph Rosenbaum and Gaige Grosskreutz,” Huber’s parents Karen Bloom and John Huber reportedly said in a statement. “Today’s verdict means there is no accountability for the person who murdered our son. It sends the unacceptable message that armed civilians can show up in any town, incite violence, and then use the danger they have created to justify shooting people in the street.”

“We hope that decent people will join us in forcefully rejecting that message and demanding more of our laws, our officials, and our justice system,” they added.