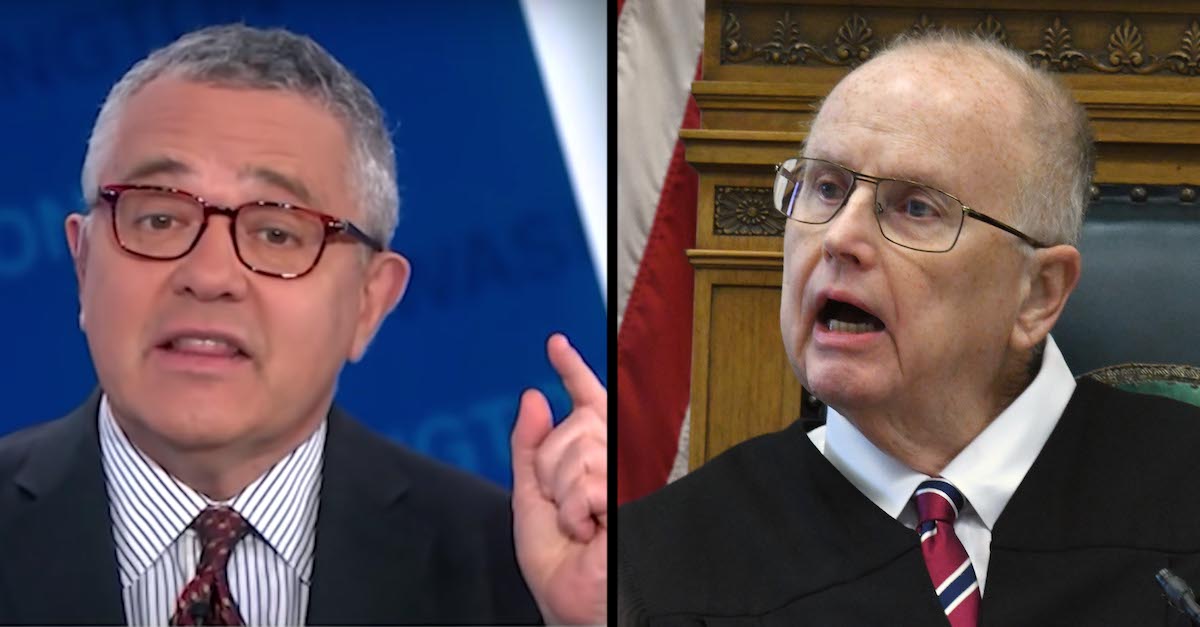 The judge overseeing the intentional homicide trial of Kenosha, Wisconsin shooter Kyle Rittenhouse unloaded on CNN chief legal analyst Jeffrey Toobin while arguing a point of evidence with prosecutors and defense attorneys Wednesday afternoon. But the judge railed against a word used by a different CNN analyst other than Toobin who appeared to be discussing a separate legal issue from the one the judge was actually discussing with the attorneys in court.

Judge Bruce Schroeder bashed “the media” generally during the lead-up to the direct slam against Toobin. Schroeder said Toobin’s analysis of the case suggested that the CNN analyst simply did not understand how the law worked.

The issue arose when prosecutors for at least a second time played a video recording portraying Rittenhouse for members of the jury. The video was recorded by an individual with The Rundown Live who narrated the events occurring in front of him (and his camera) in Kenosha in Aug. 2020. Rittenhouse defense attorney Mark D. Richards objected to prosecutors playing the narrative for the jury as part of a detective’s explanation of the underlying video. Richards said the narration was hearsay that was inadmissible. Judge Schroeder agreed; he framed the issue as a violation of the U.S. Constitution’s confrontation clause and agreed with Richards.

Schroeder spent considerable time railing on lead prosecutor Thomas Binger for playing the audio track with the video recording when he could have played the recording silently. (Binger was allowed to play clips which contained the defendant’s voice; the defense did not object to that.)

After dismissing the jury, Schroeder railed at “inaccurate things out in the media” — including his handling of another case entirely unrelated to the Rittenhouse matter. That case appears to have been the prosecution of Mark Jensen on charges that he poisoned his wife in the late 1990s.

“Actually, I had it 100% correct in the first place,” the judge said of the separate matter for which he apparently was scorned. “And your office appealed,” Schroeder said to Binger — raising his voice as indicated by the italicized type. “This was 20 years ago, and it was fine, it was a big issue, it was a big case — and the state supreme court reversed and said, no, we’re going to adopt a new rule that is to be applied in this case about waiver and forfeiture.”

Schroeder said when the case came back to him, he predicted on the record that the case would be reversed during yet a second appeal. And he said that is exactly what happened — despite the alleged scorn he received in the press.

That was 20 years ago. The man is still in prison. The case has again been reversed because of the evidence the Supreme Court told me to admit. I don’t want to mess around with confrontation issues. I can’t let you present evidence into this record which is barred by the confrontation rule, and, um, you’re asking me to just let this run while this man is making descriptive materials to prove the state of mind of the accused? That doesn’t make any sense to me at all.

“It’s a present sense impression,” Binger said — finally quoting an exception to the hearsay rule while proffering a reason to include the audio track.

Richards said the state failed to subpoena the person who made the comments in the video and would need to do so if prosecutors wanted the jury to hear the content of the narrative. The defense attorney also said there was “no proof” that Rittenhouse was “looking at” or “part of” any of what the photographer was describing or filming.

“I have no problem with this detective testifying as to people, places, and things from that video,” Richards said with reference to the police officer who was on the stand walking the jury through the recording. “We stipulated to that. I did not stipulate to the editorial comments.”

Binger again tried to argue that the material was not “testimonial” in nature and therefore was not subject to the confrontation clause. He pivoted to argue that the defense successfully scored the admission of a plethora of evidence surrounding Joseph Rosenbaum, one of the men Rittenhouse shot. That evidence showed “context,” “character,” and a “propensity for violence,” Binger recapped, and thus the judge allowed it into evidence.

“They’re going to come in to attack the character of a deceased individual,” Binger said, even though the defendant never witnessed all of Rosenbaum’s acts. That was Binger’s major sticking point. He said the judge was simultaneously preventing the jury from seeing and hearing the video that showed “exactly what the defendant witnessed.”

Binger argued that it was unfair for the judge to allow the defense to smear Rosenbaum while the state was simultaneously handicapped from presenting the recording of events happening right in front of Rittenhouse.

“These are excited utterances,” Binger said — again citing yet another exception to the rule of evidence that might have allowed the judge to okay the recording with the concomitant audio track.

Schroeder acknowledged that Rittenhouse was visible in the video in many places.

The judge then paused from the legal debate unfolding in court to bash the press.

“I’m going to comment about the media — again,” the judge continued. He quoted an unknown person who allegedly said on television that the Rittenhouse case was the “most divisive case in the country to date.”

He then railed on “the media” yet again for “saying things that are totally bizarre” about the case. He specifically slammed CNN’s Toobin and “another attorney there” who he claimed had discussed the “uncommunicated threat rule” — another “ancient rule of our law,” the judge said.  The judge walked the attorneys present through Evidence Rule 404 and slammed Toobin and his guest for apparently not understanding that “circumstantial evidence of [a] victim’s violent behavior” was admissible in a self-defense case under relevant case law.

“A comment was made that the ruling was incomprehensible,” Schroeder said with reference to Toobin and CNN’s guests. “And I think they they obviously are not familiar with this rule. That’s our law. That’s the law in the Jackson case; that’s the law in the case of the United States against Craig A. Smith, which is 230 federal second 300, a Seventh Circuit case from 2000. This is admissible evidence.”

The word “incomprehensible” appears to have actually been uttered by CNN legal analyst Areva Martin, and it appears to have been aimed at a slightly different issue than the one Schroeder was discussing. According to several CNN.com reports dating back several days, Martin appeared to be referencing Schroeder’s overall admonishment which prevented the attorneys from referring to any of those shot by Rittenhouse as “victims” but which did allow the attorneys to call them rioters or looters. Martin said on CNN that the allowance of the latter but not the former labels was evidence that Schroeder was “definitely signaling something to these jurors” and was “leaning towards supporting the defense.”

A local attorney who serves as a legal analyst for Milwaukee NBC affiliate WTMJ said recently that Schroeder has consistently been careful about the label implied by the word “victim.” Many defense attorneys abhor the word because they believe it assumes a defendant’s guilt. Since Rittenhouse is claiming self defense, he is effectively arguing that those he shot actually deserved it by the nature of their own actions.

The Federal Rules of Evidence do use the word “victim.”

Schroeder rattled off case law as if to suggest to Toobin or other commentators where to look for clarification should they be confused about his position on the actual issue at hand on Wednesday. The problem was that the judge’s citation was wrong: the Smith case is 230 F.3d 300.  (That’s federal third — we checked.) While Smith stands for the basic premise that a victim’s “character was relevant for the purpose of establishing whether [the victim] was the first aggressor,” it also limited the way such evidence could be presented: it allowed a jury to hear about a victim’s general reputation but did not allow specific instances of conduct — specifically, criminal convictions — into the case.

The issue, again, was whether Rosenbaum’s actions outside the purview of Rittenhouse leading up to the shooting should have been admitted into the trial for the jury to consider.  Schroeder decided that it should have been allowed.

“That’s what I admitted it on,” the judge said — again referencing the “uncommunicated threat rule” and the aforementioned cases.

“You’re mixing rules up, here,” the judge said to Binger. He seemed to suggest that the prosecution was to blame for the confusion surrounding the issue.

Prosecutors accused Schroeder of confusing the federal and the Wisconsin rules of evidence. What followed was a discussion about specific subsections of the various rules. Binger said Schroeder was citing “the greater latitude rule for child sex offenses” by letter and number — something entirely different — and not what he apparently meant.

Schroeder said the numbering scheme of the various federal and state rules were different but that the content was the same.

“That’s the basis upon which this ruling was made, and it’s not incomprehensible, and it’s in accordance with our law,” Schroeder said to Binger — and apparently also to Toobin from afar. “What is in the mind of the defendant is not governed by that rule. This is the character of the decedent.”

Binger said generally he had not watched Toobin or other “talking heads” and had no response to the judge’s chastisement of CNN or anyone else.

“I want the case to be fairly tried, and I wanted people to understand that we want to go forward from this case —  whatever the outcome is — and not have all kinds of people making inaccurate statements about what the law is,” Schroeder said.

“I don’t have any comment on the media’s coverage, your honor, so I’ll move on,” Binger reiterated.

After additional arguments, the judge called a break.