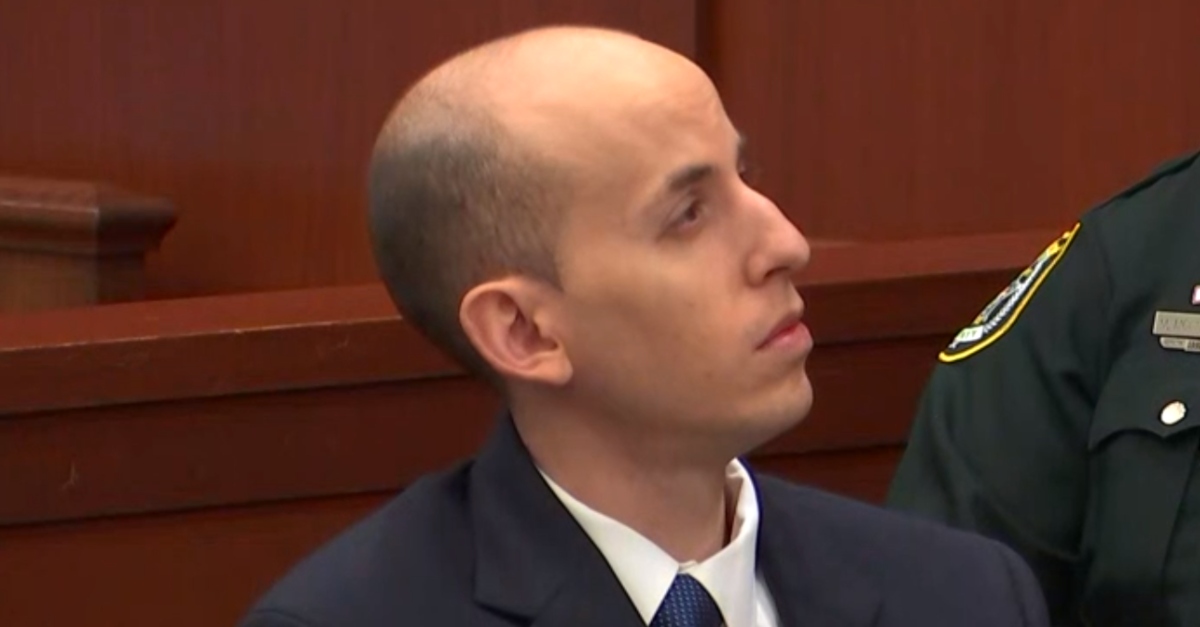 Jurors in Seminole County, Florida found Grant Amato, 30, guilty of murdering his mother Margaret Amato, 61, father Chad Amato, 59, and brother Cody Amato, 31. Prosecutors said he killed them back in January over his obsession with a Bulgarian cam girl.

#GrantAmato – GUILTY of first-degree murder in the deaths of his mother, father, and brother. The penalty phase begins Aug. 12. He now faces the possibility of the death penalty. pic.twitter.com/p2uwqtET5m

Jason Amato tells us he hates his brother #GrantAmato for what he did. pic.twitter.com/LA26KnGodx

Assistant State Attorney Domenick Leo told jurors that the defendant killed his family, and tried to make it look like a murder-suicide for which Cody was responsible. He cited the letter that investigators found that was written by Grant Amato, but from the point-of-view of Cody. Defense lawyer Jeff Dowdy said in closing arguments, however, that his client admitted to writing this but did so only to memorialize their discussion. He argued that while the family had problems at the time, they were getting back together at the time of the deaths. The defense said that authorities didn’t meet the burden of proof.

The defendant butted heads with his family over his obsession with a cam girl from overseas, and even stole about $200,000 to fund this relationship, authorities said. Leo told jurors that Grant Amato overstated his wealth to her and his online friends, but that story fell apart after his relatives got him to take a treatment program for internet addiction. During this time, Chad and Cody managed to contact his online friends and the cam girl. This blew up the facade. The defendant wrote an apology letter to his online friends, and admitted lying to them about his lifestyle, Leo said.

“I think it is safe to say by now that everyone here knows that I made a drastic mistake with Silvie [the cam girl],” Amato wrote, according to prosecutors. “I upset her, made her very sad, and ruined the end of December and beginning of January for her. I won’t go into great detail because that is not the purpose of this message, but I lied to her and you guys from the beginning about myself. I am not a professional gamer, did not own my own house, and did not drive a BMW.”

In this apology letter, Amato claimed his father was controlling and an abuser. He badmouthed his mother as just being around for the security. The defendant allegedly wrote, “[M]y brother is also controlling and does not understand how I could care for someone as much as I care for Silvie.” He said that his family hacked his computer, gained access to his phone records, and “all my personal things related to Silvie,” according to the text of the letter obtained by Law&Crime.

“They then took it upon themselves to lie to her about so many things related to me which in turn lead her to believe me even less after I finally came clean to her about the lies I told you about above,” he added.

The prosecution said the defendant killed Margaret because she was there.

“Why mom?” he said. “Because she was there. That’s why.” Grant Amato killed her to get to Chad and Cody, Leo said. “He couldn’t let her live.”

Dowdy attacked the state’s timeline of events. Cody Amato’s girlfriend Sloan Young, who testified Tuesday, said that Cody spoke to his father after 9 p.m. the night the victims apparently died. The defense said, however, that this was after the prosecution claimed Chad had been killed.

Dowdy insisted he wasn’t suggesting the deaths were part of a drug deal gone bad, or that this was a random intruder, or that the surviving brother Jason Amato was behind this. He maintained that he was just arguing that investigators didn’t meet the burden of proof.

They didn’t even reach probable cause in the initial seven-hour interview with Grant Amato, Dowdy said.

“They let him go,” he said. He pointed that his client didn’t flee, that he could’ve left and been halfway to Bulgaria by the following morning. But the defendant stayed. Grant Amato was cooperative, he said.