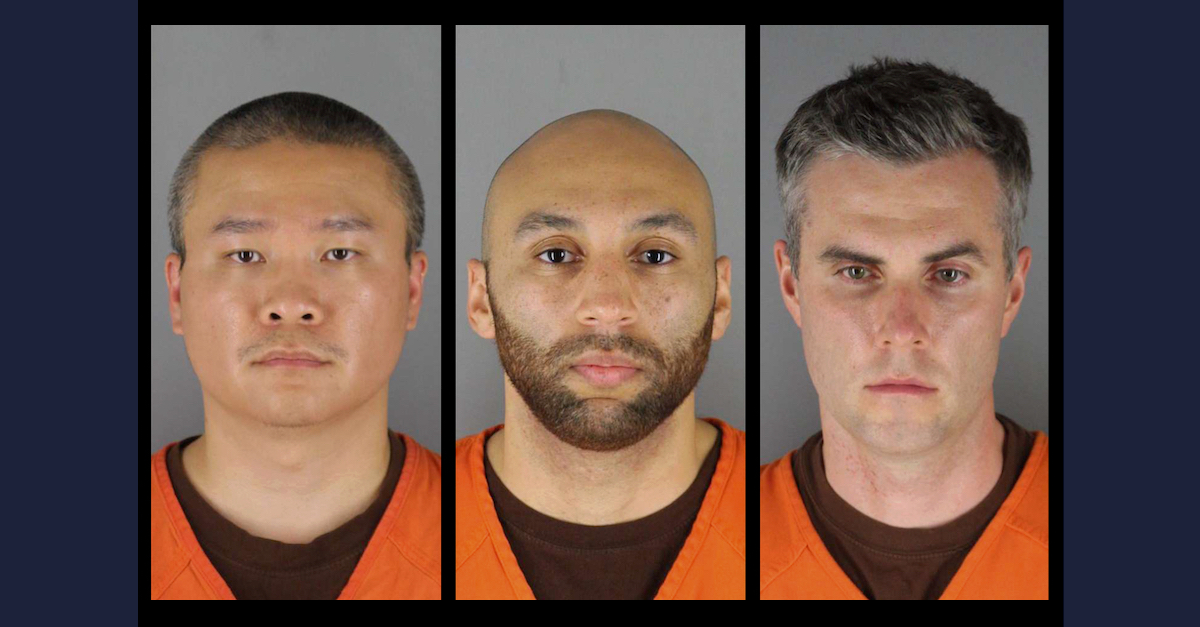 The three former Minneapolis police officers who were convicted in late February of depriving George Floyd of his constitutional rights are demanding a new trial. In essence, the men convicted of violating Floyd’s rights are now saying prosecutors violated theirs.

A three-count indictment dated May 7, 2021, accused Tou Thao, J. Alexander Kueng, and Thomas Kiernan Lane of “deprivation of rights under color of law” under the U.S. Constitution by way of causes of action enshrined in 18 U.S.C. § 242 and 18 U.S.C. § 2.  Lane faced one count; Thao and Kueng faced two. Convicted murderer Derek Chauvin was also named in the same charging instrument but pleaded guilty in late December.

That left Thao, Kueng, and Lane to face a federal jury this year. They did, and they were convicted. Their attorneys are now joining forces in an attempt to fight the convictions.

“The Government’s actions during this lawsuit stripped Mr. Thao of his constitutionally protected right to a fair and impartial trial due to repeated breaches of this Court’s pretrial orders, questions and arguments that violated rules of criminal procedure and evidence, and unprofessionalism in front of the jury,” wrote attorneys Robert M. Paule and Natalie R. Paule for Thao in a document which spring-boarded off of prior arguments by Kueng and Lane and which was subsequently joined by Kueng.

Lane’s attorney sought to set aside the verdict via a Feb. 28 missive which rather tersely argued that there was “no evidence beyond a reasonable doubt to support the verdict.” Specifically, his attorney said “Lane provided timely medical services and did so without ‘deliberate indifference’ or ‘willfulness’ as defined in” jury instructions.

That led to the pile-on by the attorneys Paule viz. defendant Thao. Their document continued:

These actions were intentional as they were done by well-seasoned prosecutors. Further, they continued to do so even after the Court admonished them for their behavior. Some, but not all, of the prosecution’s actions could amount to harmless error, though some ran over the line of misconduct resulting in an unfair trial. However, in the aggregate, all of the singular actions of the prosecution over weeks of trial added up like thin strands of silk into a strong rope and resulted in one thing: a violation of Mr. Thao’s due process rights.

The defense said that prosecutors elicited “[u]nfairly duplicative evidence and cumulative testimony” and “[v]iolat[ed]” a pretrial order by “eliciting emotional responses” and “speculation” from witnesses. The defense also alleged that prosecutors promulgated an “[a]rgumentative opening” statement, were “[a]rgumentative” with Thao, and issued an “[i]mproper closing argument.” As to the latter point, the defense pointed to an alleged “Confrontation [C]lause violation” and to alleged “[b]urden shifting,” “[d]isparaging the defense,” “[c]alling on the morals or emotions of the jury,” “[m]isstat[ing] the evidence,” “[v]ouching for the truthfulness or untruthfulness of the defendants” as among the myriad problems. Additionally, the defense accused prosecutors of “[v]iolating Graham v. Connor’s stance against 20/20 hindsight.”

Elsewhere, the defense listed several passages from the trial transcript where the judge overseeing the case chided the prosecution for “being argumentative,” “prejudicial,” and “highly wrong” for issuing certain “arguments in front of the jury.”

“The prosecution’s conduct was intentional as the same objections were sustained back-to-back,” the defense said in in its mistrial motion.

The defense again cited defense-favorable remarks by the judge from the transcript and argued that the “government continued to flout” the judge’s “rulings up to the very end of trial: the Government argued with the Court in front of the jury during closing arguments.”

“The Government had four veteran attorneys on the lawsuit that engaged in a pattern of improper actions,” the defense said. “As they were repeated after admonishment, these actions cannot be considered nonintentional.”

In a subsequent section of the motion, the defense said the “cumulative effect of the misconduct” was, in essence, appalling.

Among the issues here, the defense said, were that prosecutors “did not properly admit evidence to show the required specific intent mens rea for each crime.”

“The Government’s prosecutorial misconduct did not happen with an open and shut case,” the defense went on. “It occurred in a case where they had an incredibly difficult task of proving – beyond all reasonable doubt – that Defendant acted with a bad purpose or improper motive.”

From the document, again, at length:

Chauvin was convicted of murder in a Minnesota state court. A criminal trial for Kueng, Lane, and Thao is scheduled to begin June 13 before the same judge who presided over Chauvin’s case.

“[T]herefore,” the government wrote, Lane’s motion to toss the guilty verdicts “must be denied, as substantial evidence supports the jury’s verdict.”

Read the array of relevant thus-filed documents below: