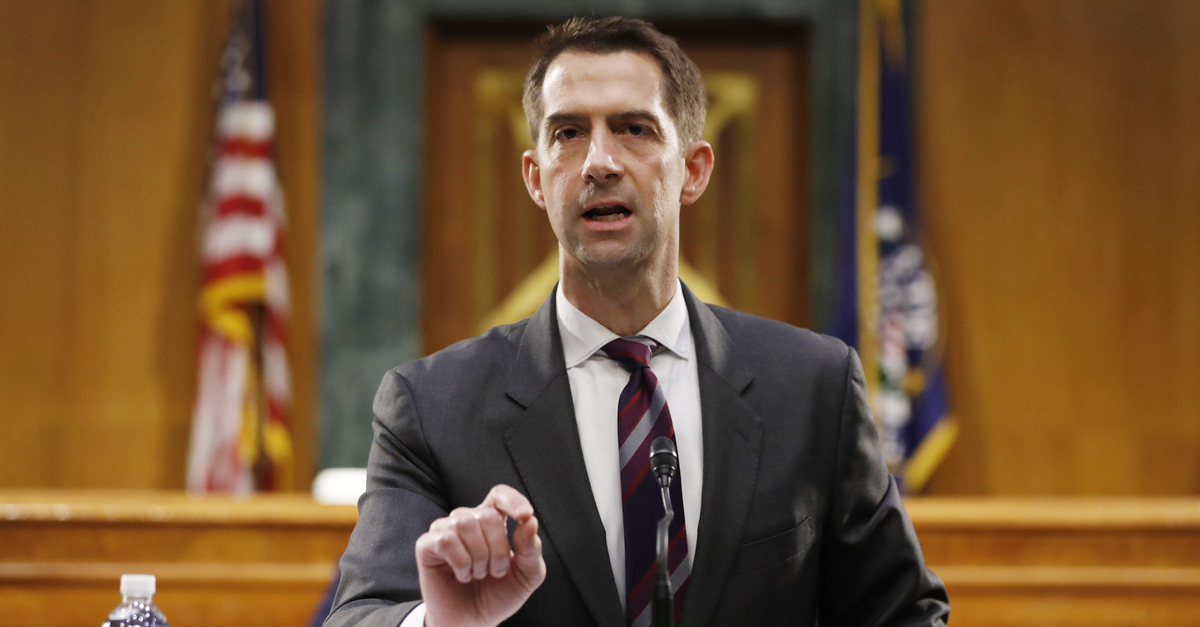 Sen. Tom Cotton (R-Ark.) on Monday called for the U.S. military to give “no quarter” to those who engage in theft and property destruction amid demonstrations against police brutality and the Minneapolis Police Department’s alleged murder of George Floyd. The phrase “no quarter” began to trend on Twitter after Cotton’s tweet was publicized. Several lawyers quickly noted that calls for such use of force are tantamount to calls for the military to commit war crimes against the American people.

“Anarchy, rioting and looting needs to end tonight,” Cotton tweeted. “If local law enforcement is overwhelmed and needs backup, let’s see how touch these Antifa terrorists are when they’re facing off with the 101st Airborne Division. We need to have zero tolerance for this destruction.”

Reporter Jamie Dupree took a screenshot of the original tweet and publicized it. Cotton quote-tweeted the Cox Media reporter and added: “And, if necessary, the 10th Mountain, 82nd Airborne, 1st Cav, 3rd Infantry—whatever it takes to restore order. No quarter for insurrectionists, anarchists, rioters, and looters.”

And, if necessary, the 10th Mountain, 82nd Airborne, 1st Cav, 3rd Infantry—whatever it takes to restore order. No quarter for insurrectionists, anarchists, rioters, and looters. https://t.co/OnNJmnDrYM

“A no quarter order is a war crime, prohibited even in actual insurrection since Abraham Lincoln‘s signed the Lieber Code in 1863,” conservative attorney David French tweeted. “Such an order is banned by international law and would, if carried out, be murder under American law.”

French’s estimation of the law is correct.

The Lieber Code was developed by Franz Lieber and promulgated by Lincoln in 1863 in order to keep Union troops on their best behavior against Confederate traitors. It is the first modern codification of the laws of war.

The Lieber Code’s Article 60 expressly prohibits “no quarter” orders except for one specific set of facts.

“It is against the usage of modern war to resolve, in hatred and revenge, to give no quarter,” the document notes. “No body of troops has the right to declare that it will not give, and therefore will not expect, quarter; but a commander is permitted to direct his troops to give no quarter, in great straits, when his own salvation makes it impossible to cumber himself with prisoners.”

That caveat, however, no longer exists in the modern laws of war which have significantly evolved since the U.S. Civil War.

The U.S. Department of Defense Law of War Manual is also explicit on the prohibition against “no quarter” orders in Section 5.5.7:

Prohibition Against Declaring That No Quarter Be Given. It is forbidden to declare that no quarter will be given. This means that it is prohibited to order that legitimate offers of surrender will be refused or that detainees, such as unprivileged belligerents, will be summarily executed. Moreover, it is also prohibited to conduct hostilities on the basis that there shall be no survivors, or to threaten the adversary with the denial of quarter.

This rule is based on both humanitarian and military considerations. This rule also applies during non-international armed conflict.

The global custodian for customary international humanitarian law–which is another phrase for the laws of war–is the International Committee of the Red Cross (ICRC), an organization distinct from state-based disaster relief organizations.

The ICRC notes that the “duty to grant quarter is a basic rule that prohibits attacking a person recognized as hors de combat in combat situations on the battlefield.”

Ordering that no quarter will be given, threatening an adversary therewith or conducting hostilities on this basis is prohibited.

Additional Protocol II of the Geneva Conventions–to which the United States is a state signatory–also prohibits such calls for unrelenting use of violence by armed forces.

The Fundamental Guarantees of Geneva in Article 4 note:

All persons who do not take a direct part or who have ceased to take part in hostilities, whether or not their liberty has been restricted, are entitled to respect for their person, honour and convictions and religious practices. They shall in all circumstances be treated humanely, without any adverse distinction. It is prohibited to order that there shall be no survivors.

After this accurate interpretation spread far and wide, Cotton tried to walk back his tweets by proceeding to post several tweets claiming he used the phrase “no quarter” in a “colloquial” sense.

“To the scholars pretending the colloquial phrase ‘no quarter’ means a war crime—check out a dictionary,” the Arkansas Republican tweeted in response to French.

“Definition of ’no quarter’: If you say that someone was given no quarter, you mean that they were not treated kindly by someone who had power or control over them.”https://t.co/dUwxxjus6H https://t.co/VIXP2UfMSd

National security and whistleblower attorney Mark Zaid took Cotton up on his offer and did consult a dictionary.

“You need to look again,” Zaid wrote in response–citing the following definition from the Law Insider legal dictionary: “No quarter will be given means refusing to spare the life of anybody, even of persons manifestly unable to defend themselves or who clearly express their intention to surrender.”

“And that was just a quick Google check,” the attorney added. “I can do a legal brief for you too and show how misguided you are being.”

“A war crime even in the middle of a declared war with a foreign enemy,” the law of war expert noted.