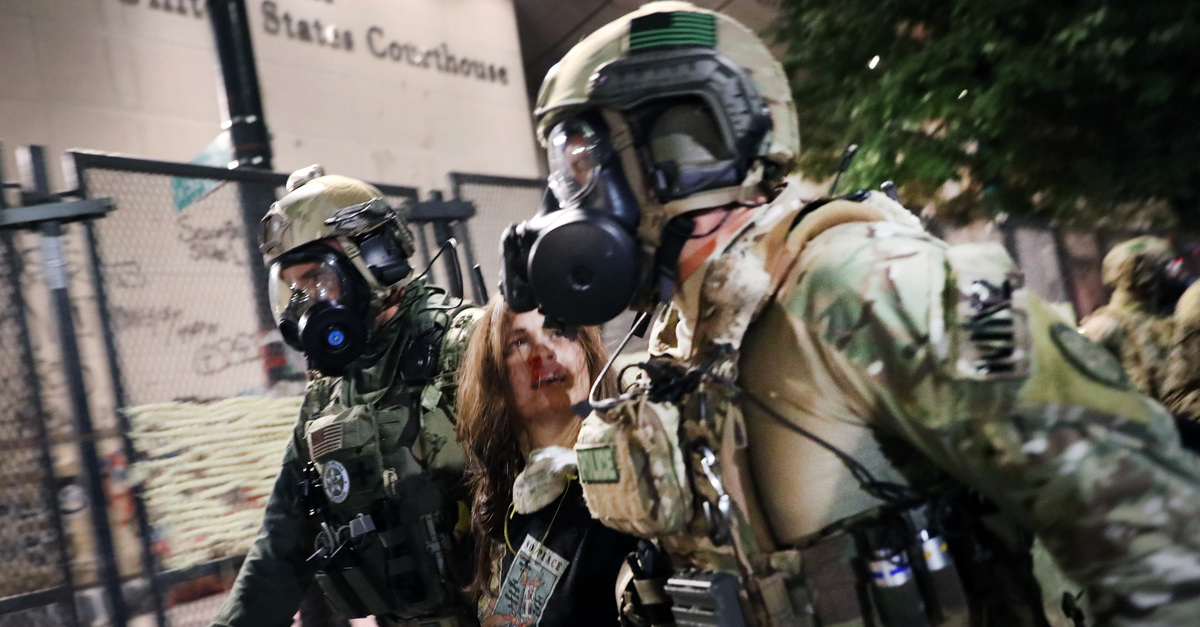 Don’t Shoot Portland and the famous Wall of Moms — as well as other individual activists and Black Lives Matter protesters — filed a lawsuit in federal court on Monday against the Department of Homeland Security (DHS) and various members of the Trump administration in a bid to stop federal troops from using tear gas and other so-called “non-lethal” weapons against peaceful protesters.

“Plaintiffs who have been exercising their lawful rights have been repeatedly injured by [DHS] agents on the streets of their city,” the 48-page lawsuit alleges. “They have been tear-gassed night after night, left vomiting and unable to eat or sleep because of the toxic poison blasted at them. They have been shot at over and over—with rubber bullets, bean bags, pepper spray, and a range of other projectiles fired at close range and with brutal effect. They have had flash-bang explosive devices detonated right in front of them. They have been forced to speak and assemble in fear of not just bodily harm, but the possibility of sudden arrest without probable cause.”

The lawsuit also claims the entire police action in Portland is unlawful.

“In addition to violating Plaintiffs’ well-established constitutional rights to freedom of speech and assembly, freedom from unreasonable seizures, and due process, Defendants’ actions betray a foundational principle of American democracy: that the federal government exercises only the powers the Constitution authorizes,” the lawsuit says. “Other powers, including the general police power, are reserved to the states and their subdivisions. The U.S. Constitution does not permit a federal domestic security or police force.”

Federal troops have been criticized by some for a heavy-handed response to vandalism and property destruction in Oregon’s largest city. Acting DHS Secretary Chad Wolf, who is one of the named defendants in the lawsuit, has repeatedly vowed to protect Portland’s federal courthouse from racial justice protesters’ spray paint while alleging that “criminal violence perpetrated by anarchists” is the major cause of turmoil there.

The federal police action, which was given the official code name “Operation Diligent Valor,” has also been criticized because of allegations that camouflaged DHS agents have arrested protesters and hauled them off in unmarked vehicles. Federal officials claim the detentions do not even rise to the level of “custodial arrests,” but many leading legal experts have flat-out referred to such actions as “kidnappings” and unconstitutional arrests.

The lawsuit claims that Wolf’s stated justification for those controversial uses of federal forces is actually just a ruse.

“According to the White House press secretary and other sources, the asserted authority for the DHS agents’ presence and actions in Portland is 40 U.S.C. § 1315, which allows federal officials to protect federal property,” the filing continues. “But Defendants’ statements, a recently revealed internal DHS memorandum, and the conduct of DHS officers on the ground far from the federal courthouse make clear that Operation Diligent Valor actually furthers a separate DHS policy: to intimidate and silence protesters because of their message. Because Defendants’ policy is not in furtherance of protecting federal property, their invocation of § 1315 is purely pretextual.”

The lawsuit goes into detail about that internal DHS memo.

The filing notes [emphasis in original]:

Pursuant to an internal unclassified DHS policy document, the DHS Office of Intelligence & Analysis has authorized its intelligence officers to surveil protesters if the agency determines that they pose “[t]hreats to damage or destroy an public monument, memorial, or statue”—“regardless of whether such structures are situated on Federal property”.

The DHS intelligence directive further indicates that DHS analysts can collect information about “individuals or groups” whom they “reasonabl[y] belie[ve]” threaten to damage or destroy any public monument, including “their tactics, techniques, or procedures,”and “information that otherwise informs an overall assessment that threats to [monuments] will materialize.”

“In other words,” the lawsuit continues, “[DHS is] operating under a directive that minor property damage to a non-federal monument or statue—a “threat” the agency for the first time characterizes as a matter of homeland security—justifies a significant expansion of the sweep of the federal government’s authority to collect intelligence on its residents.”

The lead plaintiffs are an organization dedicated to mutual aid efforts in service of the Black Lives Matter movement.

“Since George Floyd’s murder, Don’t Shoot Portland has organized mutual aid to support the Black Lives Matter protests in Portland and the Black community enduring trauma from the event,” the lawsuit explains. “Public health and safety have been the focus of its mutual aid. Don’t Shoot Portland distributes protective equipment like face masks and hand sanitizer, first aid kits, baking soda, and other resources that provide relief from tear gas, along with water, food, and assistance with hotel and temporary housing costs and transportation.”

Such mutual aid, the lawsuit notes, is the organization’s free speech–a legal position that has been endorsed by federal courts in the past.

“Since Operation Diligent Valor started, federal officers have harmed Don’t Shoot Portland’s mission by destroying its mutual aid supplies with tear gas and through other means,” the lawsuit says.

The filing details the history of the nationally famous Wall of Moms:

The first night that Wall of Moms formed, July 18, the Moms attended a vigil organized by Don’t Shoot Portland for Shai’India Harris, a young Black woman whose murder was never investigated because Portland police claimed they were too busy policing the protests.

Wall of Moms then went to the street outside the Mark O. Hatfield U.S.Courthouse to form a human barrier for the young protesters who were giving speeches. The Moms did not throw anything or threaten officers in any way; they just shouted, “Leave the kids alone!” They hoped that the presence of mothers in regular clothing would remind the federal officers that these protesters were young people calling for social change. That hope met a brutal reality when federal officers, dressed for war, blasted everyone, including Ms. Barnum and Wall of Moms linked arm-in-arm, with tear gas, flash-bang grenades, and other munitions.

The plaintiffs are requesting injunctive relief to put federal troops in compliance with the Constitution and federal law. They also are seeking declaratory relief stating that “DHS policies, orders, and directives” which direct DHS agents to undertake “a policy to intimidate and deter protesters because of their views and beliefs through surveillance; the use of militarized and unmarked force; the excessive deployment of crowd-control measures such as tear gas, pepper-spray balls, and less-lethal munitions; and warrantless arrests or custodial detentions without probable cause are unlawful” and that Wolf’s orders are “void.”