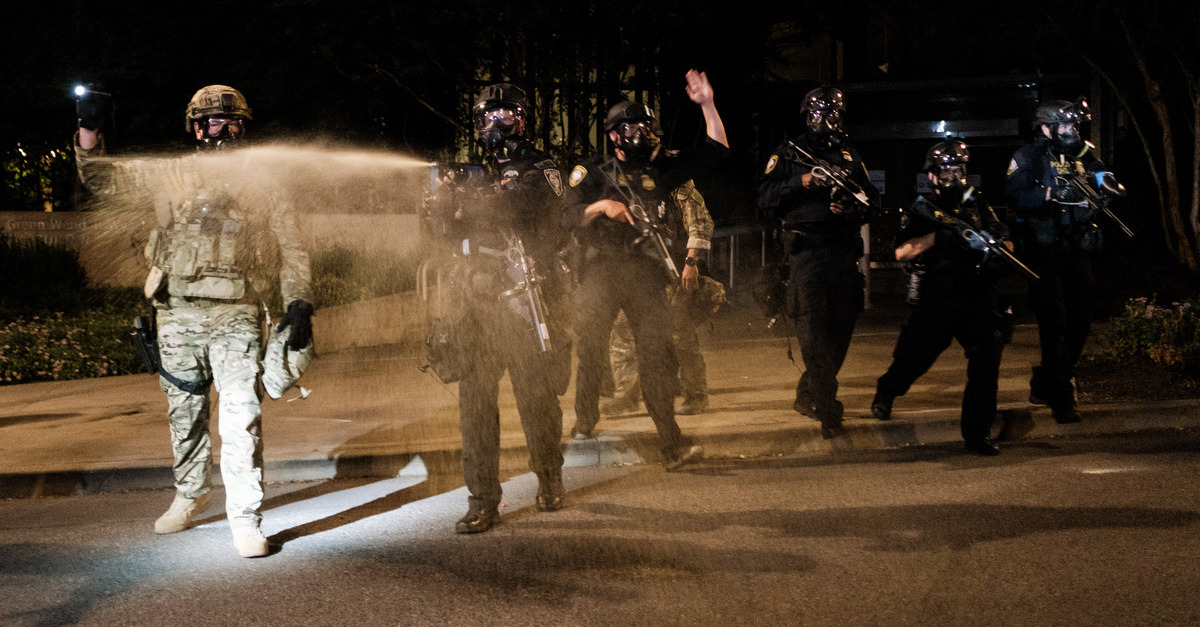 The Department of Homeland Security’s (DHS) admitted detention of protesters in Portland amounts to little more than “kidnappings” according to a prominent national security attorney.  That same attorney went on to muse about the chance that a few well-placed state-level Freedom of Information Act requests could ultimately uncover information about what was occurring — even if federal officers were involved.

Since at least July 12, camouflaged agents lacking visible badges have been rounding up protesters in Oregon’s largest city.

Late Friday, national security journalist Spencer Ackerman reported that a Customs and Border Patrol (CBP) official claimed his forces have detention authority under an obscure Obama era law which permits DHS to “make arrests without a warrant for any offense against the United States committed in the presence of the officer or agent or for any felony cognizable under the laws of the United States if the officer or agent has reasonable grounds to believe that the person to be arrested has committed or is committing a felony.”

Early Saturday morning, National Security Counselors Executive Director Kel McClanahan mused about the “interesting opportunities for research” posed by any potential coordination between federal officers and any state or local authorities in Oregon or Portland.

“Unless they are truly moronic, the DHS black SUVs are letting local police know when and where they’re operating so you don’t have a situation of a police officer having a shootout with someone he thinks is a kidnapper,” the seasoned attorney noted on Twitter.

“If you were to file a #FOIA request with DHS for records about these kidnappings, you’d almost certainly get stonewalled,” he noted. “But, fun fact, state open records laws often don’t mirror federal FOIA.”

McClanahan explained that there’s “not really a provision in a state law” that would bar a state FOIA request based on the secrecy desires or considerations of the federal government.

“So if you have a scenario where a state agency [and] a federal agency are corresponding, you can often get stuff from the state agency that you couldn’t get from the feds,” he continued.

In other words, any such cooperation on the DHS detention program would probably be memorialized in various files, and the Beaver State would likely have to provide any such information to anyone who filed a proper request under Oregon’s fulsome Public Records law.

The detentions have been described on social media as “kidnappings” by opponents of the federal practice, with the hashtag #PortlandKidnappings trending on Saturday, but McClanahan’s estimation of the federal government’s lack of authority lends an imprimatur of legitimacy to such critiques.

Video of the protester-grabbing has been widely-shared:

Militarized Federal Agents from a patchwork of outside agencies have begun policing Portland (in rented minivans vans) without the explicit approval of the mayor, the state, or local municipalities. This is what that looks like in practice: pic.twitter.com/losap4SsgI

“Sure would be a shame if someone crowdsourced a bunch of requests to state [and] local [police departments] about DHS’s activities [and] got a bunch of records DHS didn’t want to release,” McClanahan sarcastically essayed. “Such a shame.”

As Law&Crime has previously reported, DHS Acting Secretary Chad Wolf has defended the federal officers’ actions on both Twitter and via a press release.  Oregon’s attorney general is suing the federal government over the arrests.

National Security Counselors is a public interest law firm which specializes in national security law and information and privacy law.

Its website notes that the firm was “founded to further the twin ideals that the public needs to be as informed as possible about what its government does in the name of national security, and that people entangled in legal matters in this field should have reasonable access to knowledgeable legal assistance, regardless of income.”