Judge Says George Floyd Knew ‘He Was Likely to Die,’ Clears the Way for Tougher Sentence Against ‘Indifferent’ Derek Chauvin 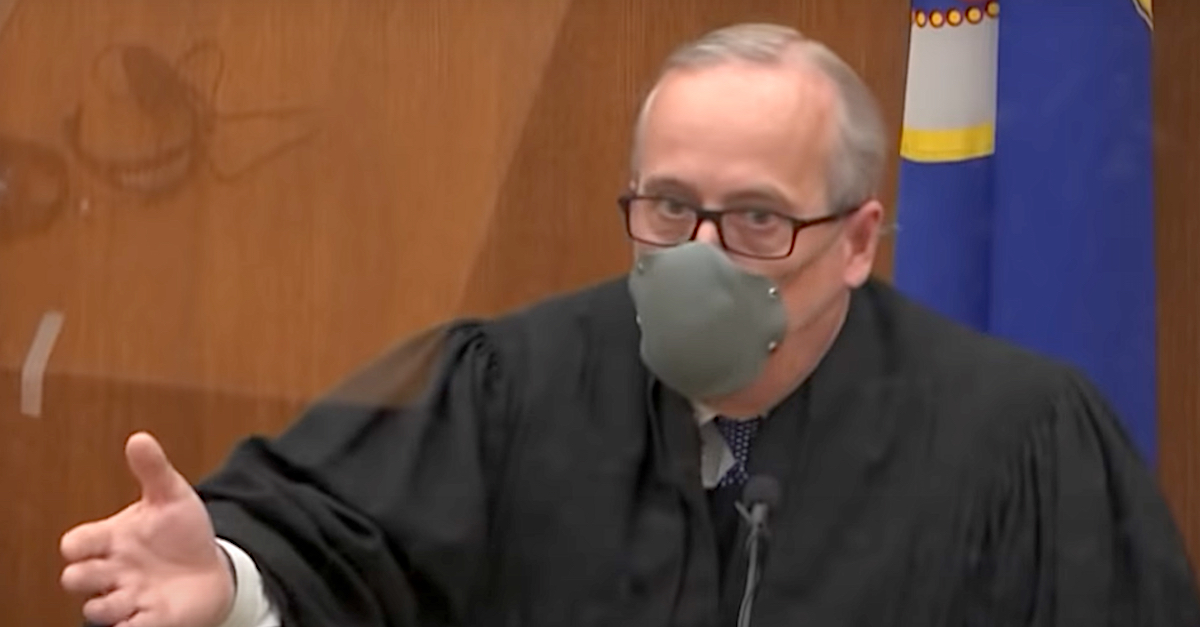 Peter Cahill, the Minnesota judge who presided over the trial of ex-Minneapolis police officer Derek Chauvin, on Tuesday evening agreed that several aggravating factors support a tougher sentence for the defendant convicted of murdering George Floyd, Jr. Cahill said Floyd was “terrified by the knowledge that he was likely to die” but that Chauvin remained “indifferent” — and thus deserves a more strict punishment than that generally contemplated by Minnesota sentencing guidelines.

A jury on April 20th convicted Chauvin of second-degree murder, third-degree murder, and second-degree manslaughter. After the conviction, both the state and the defense submitted arguments surrounding Chauvin’s possible sentence. Minnesota’s second-degree murder statute authorizes a sentence of up to forty years, but a state sentencing grid recommends 150 months (12.5 years) for a defendant such as Chauvin who has no prior criminal history. The state wanted more, so it moved for a so-called “upward sentencing departure” — that is, a lengthier sentence than the standard grid recommendation.  Law&Crime has previously explained at length the statutory maximums for all three applicable charges and the arguments made by each side leading up to the Cahill’s ruling.

Cahill found that Chauvin (1) “abused a position of trust and authority,” (2) “treated George Floyd with particular cruelty,” (3) that “[c]hildren were present during the commission of the offense,” and (4) that Chauvin “committed the crime as a group with the active participation of at least three other persons.”  However, Cahill did not find that Floyd “was particularly vulnerable.”

Chauvin is seen in a post-conviction mugshot.

“As a police officer, Defendant held a position of trust and authority with respect to the community and its members with which he had contact,” Cahill ruled in disagreement with the defense. “The trust placed in Defendant included trust that anyone arrested would be treated with respect and only with reasonable force and that medical needs would be addressed in a timely fashion.”

Cahill continued at length on this point:

Specifically, Defendant, with two other officers, held a handcuffed George Floyd in a prone position on the street for an inordinate amount of time (more than nine minutes and forty seconds), a position that Defendant knew from his training and experience carried with it a danger of positional asphyxia. The prolonged use of this technique was particularly egregious in that George Floyd made it clear he was unable to breathe and expressed the view that he was dying as a result of the officers’ restraint. In addition, one of the other officers involved in the restraint twice checked Floyd’s pulse after Floyd had been restrained in this position for more than six and one- half minutes and informed Defendant that he was unable to detect a pulse. In addition, the other officers involved in the restraint also twice inquired during the restraint if they should roll Floyd onto his side, i.e., into a “recovery position” and later also informed Defendant that he believed Floyd had passed out. Thus, not only was the danger of asphyxia theoretical, it was communicated to the Defendant as actually occurring with George Floyd but Defendant continued his restraint of Floyd until EMS personnel arrived and prepared to load Mr. Floyd onto a stretcher.

When it became clear even to the bystanders that George Floyd was in medical distress, was no longer responsive, and had ceased breathing, Defendant further abused his position of trust and authority by not rendering aid, by declining two suggestions from one of his fellow officers to place George Floyd on his side, and by preventing bystanders, including an off-duty Minneapolis fire fighter, from assisting. The failure to render aid became particularly abusive after Mr. Floyd had passed out, and was still being restrained in the prone position, with Defendant continuing to kneel on the back of Mr. Floyd’s neck with one knee and on his back with another knee, for more than two and a half minutes after one of his fellow officers announced he was unable to detect a pulse.

The use of a knee on the back of the neck while restraining a suspect in the prone position was not a technique that was part of any training by the Minneapolis Police Department and was not an authorized use of force.

Defendant’s placement of his knee on the back of George Floyd’s neck was an egregious abuse of the authority to subdue and restrain because the prolonged use of this maneuver was employed after George Floyd had already been handcuffed and continued for more than four and a half minutes after Mr. Floyd had ceased talking and had become unresponsive.

“[H]is positional asphyxia was particularly cruel in that Mr. Floyd was begging for his life and obviously terrified by the knowledge that he was likely to die but during which the Defendant objectively remained indifferent to Mr. Floyd’s pleas,” Cahill said. “Restraining an individual in the prone position against the hard street surface by kneeling on the back of Mr. Floyd’s neck with his other knee in Mr. Floyd’s back, all the while holding his handcuffed arms in the fashion Defendant did for more than nine minutes and forty seconds is by itself a particularly cruel act.”

In ruling that Floyd was not “particularly vulnerable,” Cahill said as follows: “Although George Floyd was handcuffed, he had still been able to resist arrest and to prevent three police officers from seating him in a squad car before he was placed in the prone position, so that, by itself, did not create a particular vulnerability.”

Read the full verdict below as to aggravated sentencing factors: