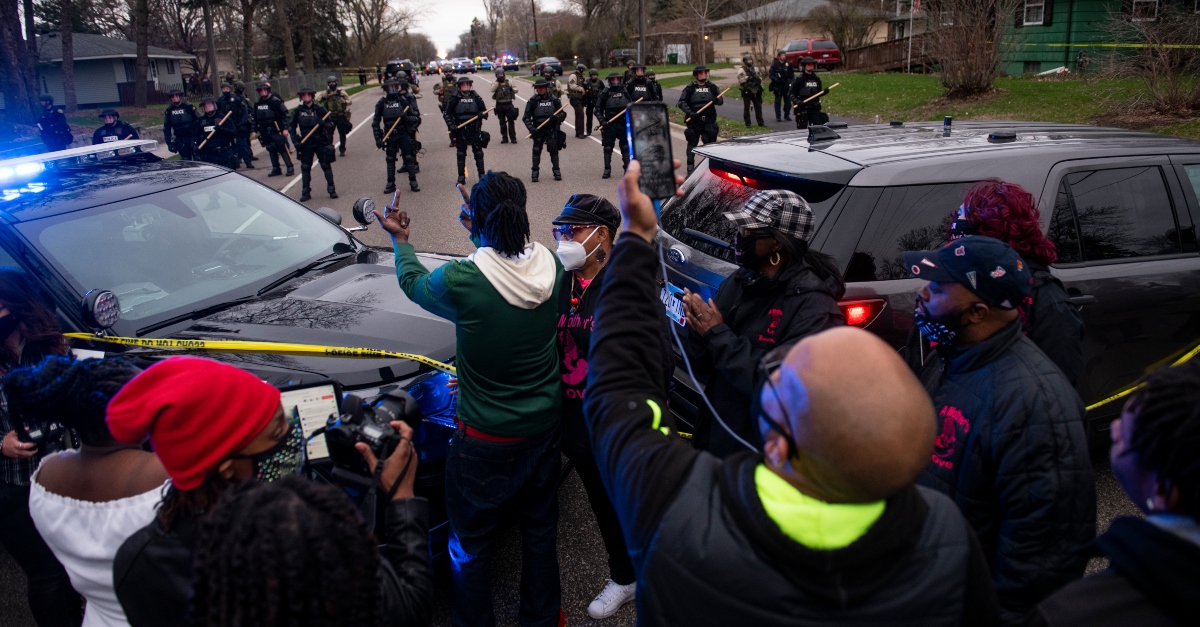 Police shot and killed a driver during a traffic stop Sunday in Brooklyn Center, Minnesota, just minutes away from Minneapolis. The incident immediately landed in a cultural fissure. The man, identified in social media and news reports as Daunte Wright, 20, was Black. This incident happens amid a trial against fired, white Minneapolis police officer Derek Chauvin, 44, for the fatal arrest of George Floyd, 46, who was also Black.

The man was pulled over for a traffic violation, and faced an outstanding warrant, Brooklyn Center police said.

Police shooting today about 10 miles from the #DerekChauvinTrial courthouse. This was the seen about 45 mins ago. https://t.co/DBU1H9dx73

Some started running after crowd threw a few things at law enforcement. Activist asking for peace – saying “we can do better.” “If you don’t want to get tear gassed, leave now.” Saying they have milk in case it does happen pic.twitter.com/7AJkMpE8SE

On scene here in Brooklyn Center near 63rd & Kathrene just witnessed police in riot gear rolling up to the scene here. Stay with @KARE11 for the latest. pic.twitter.com/GFNEoSoQLI

Wright’s family said he was shot and killed after police pulled him over for having an air freshener in the rearview mirror of his mother’s car.

Family members say 20-year-old Daunte Wright was killed by a police officer in Brooklyn Center this afternoon after being pulled over for displaying an air freshener from his rearview mirror in his mother’s car. @MPRnews pic.twitter.com/mPq8tnmjaZ

Brooklyn Center police, who did not name Wright, said Sunday that they pulled over a driver for a traffic violation around the 6300 block of Orchard Avenue before 2 p.m. They determined the driver faced an outstanding warrant. They tried to take him into custody, but he went back into the vehicle, police said. One of the officers shot the driver. Officers said the vehicle went several blocks before crashing into another one.

Police said they tried to save the driver, but he died at the scene. The autopsy and formal identification are pending. A woman in the vehicle sustained non-life threatening injuries in the crash, but people in the other vehicle were unhurt. Police said they “believe” body-worn and dash cams were on.