‘Unless You Stop a Bully, a Bully Will Never Stop’: Sandy Hook Families’ Lawyer Tears into Alex Jones as Connecticut Trial Kicks Off 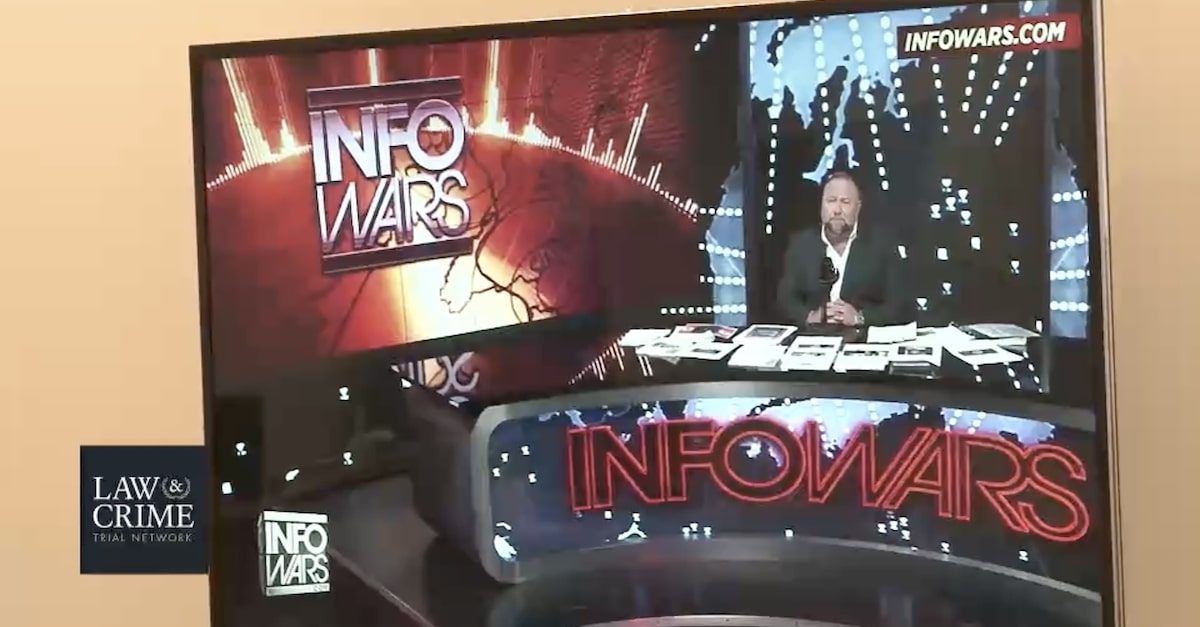 A lawyer for the Sandy Hook families displays a Alex Jones broadcast during opening statements. (Screenshot via Law&Crime)

As the second trial against conspiracy theorist Alex Jones kicked off, an attorney for eight families of Sandy Hook victims and a former FBI agent told a Connecticut jury that the case is about standing up to bullies.

“Unless you stand up to bullies, a bully will never stop,” lawyer Chris Mattei said toward the start of opening statements.

Jones’s attorney Norm Pattis countered to the jury that there job is not to stop his client.

“Our suggestion is you stop Alex Jones you do a graver harm upon the public,” Pattis said. “They hate him because he says outrageous things and the haters want him silenced.”

A little more than a month has passed since a Texas jury made Jones pay millions to parents Neil Heslin and Scarlett Lewis for his lies that the Sandy Hook massacre was a “hoax” staged by crisis actors and perpetrated by the U.S. government to weaken the Second Amendment right to bear arms. That jury awarded $4.1 million in compensatory damages and $45.2 million in punitive damages, though it remains unclear whether the latter amount will be dramatically reduced.

But Jones’s possible financial penalties are not over yet, with the second damages trial opening Tuesday in Connecticut.

He lost three defamation lawsuits related to his Sandy Hook broadcasts by refusing to turn over discovery. Juries simply must determine how much he owes to them.

Earlier on Tuesday, Judge Barbara Bellis tied the hands of Jones’s defense further: forbidding him from presenting evidence or arguments that Jones and his entities did not profit from Sandy Hook coverage. That was because Jones failed to turn over Google Analytics that would have given the plaintiffs a glimpse into how much money he made on the defamatory broadcasts.

In his opening statements, Mattei focused on that business model, stoking fear in his viewers in order to sell them dubious health products.

“The whole message is this: that there is a global plot of financial and media political elites, including in our own government, which are trying to establish a one-world, radical government to enslave and kill people,” Mattei said. “That’s the message, and he’s been pushing it for 20 years now.”

After starting in Austin, Texas, in the 1990s, Jones’s Infowars broadcasts got picked up and syndicated nationally over 200 radio stations, but Mattei told jurors that the seemingly random parade of conspiracy theories served a business purpose.

“You heard about when I told you that the government is lowering your sex drive so that you won’t have any more children?” Mattei said, affecting the style of an infomercial salesman. “Then I have something just for you: Super male and female vitality. Just $52.45.”

“You’re about those food shortages that the government has been inflicting upon you,” he continued. “I got store-able food for you.”

The families are led by Bill Sherlach, the widower of slain school psychologist Mary Sherlach. Joining the victims’ families is former FBI agent Bill Aldenberg, a 20-year veteran described by Mattei as one of the most accomplished agents in the state of Connecticut.

During the years of his Sandy Hook broadcasts, Mattei said, business was booming. The lawyer displayed charts for the jury showing the spikes in traffic after Infowars posted a report falsely claiming nobody died during the Sandy Hook massacre. In fact, the death toll rose to 28 people, including the perpetrator Adam Lanza and his mother, at home. 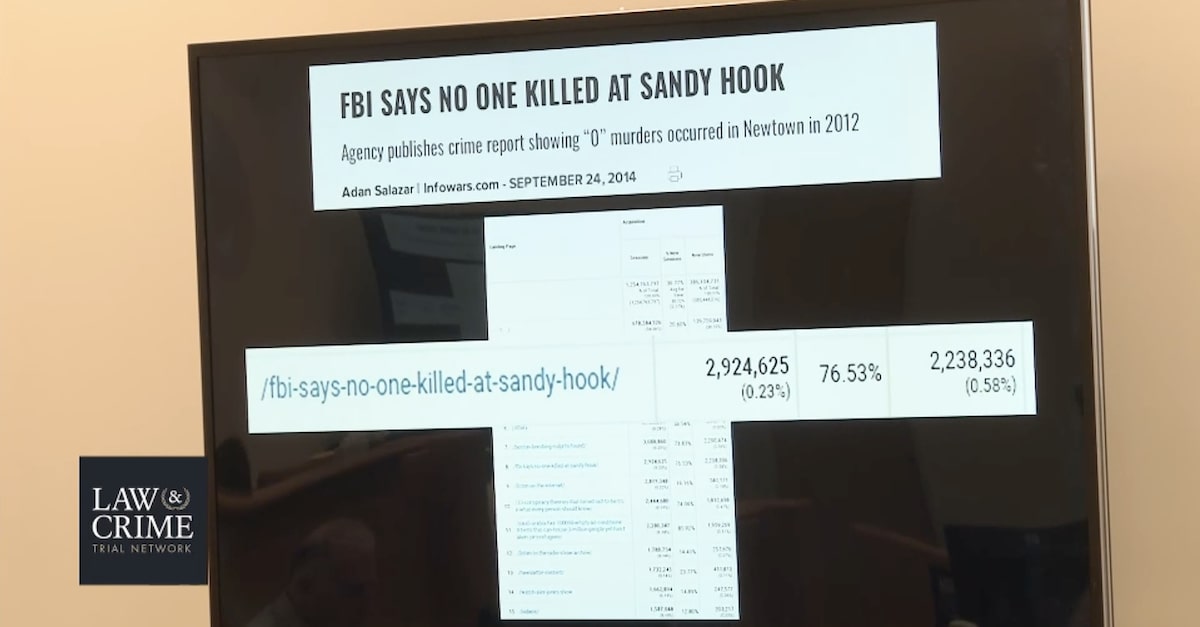 Jones is expected to testify later at trial, according to his attorney, and if the previous trial is any guide, that could come with fireworks. Judge Barbara Bellis already has issued sanctions against him twice, and she chided his lawyer Pattis multiple times during his opening statements when the attorney began treading into politically charged topics.

Pattis claimed that Jones became a lightning rod after Jones supported former President Donald Trump in the 2016 — and spoke against his rival, Hillary Clinton.

“She never got sued,” Pattis said, referring to the former Secretary of State.

Mattei, a former federal prosecutor during the Barack Obama administration, lodged an objection at that point, which was sustained.

Pattis then insulted what he described as broadcast journalist Megyn Kelly’s “hit piece” against Jones, which aired on NBC News and focused on his Sandy Hook conspiracy theories. That sparked another sustained objection.

In the Texas trial, Jones mocked one of Sandy Hook victim family members who sued him on a broadcast that aired right before he took the stand. He spoke back to the presiding judge, who dressed him down on multiple occasions and accused him of chewing gum. Judge Bellis noted that she will have little tolerance for any antics by Jones on the witness stand.

“I am going to deal with Mr. Jones when he testifies,” she warned. “I expected to canvas him on the issues that are off limits. If there are issues I will address contempt on the spot.”

The evidentiary phase of trial began with testimony by Aldenberg, the FBI agent on the SWAT team that responded on the day of the massacre. His testimony turned emotional just before the lunch recess as he described the scene.

Update—Sept. 13, 2022 at 1:08 p.m. Eastern Time: This story has been updated to include background and details from the defense opening statements.