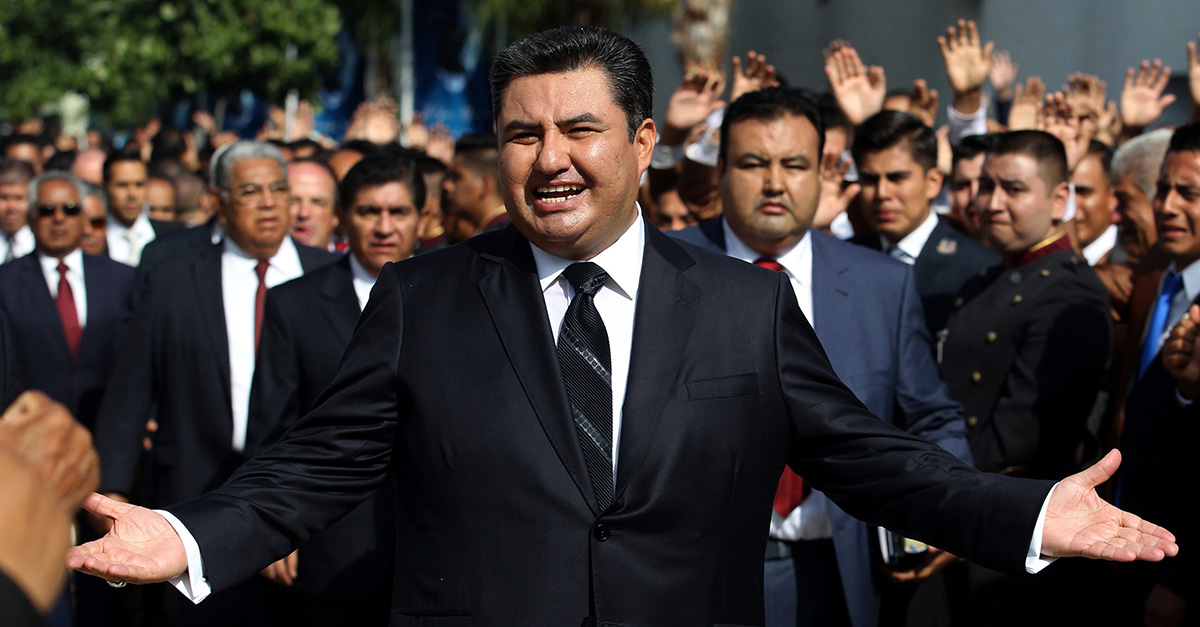 This picture taken on August 9, 2017 shows the leader of the Church of the Light of the World, Naason Joaquin Garcia, walking among his parishioners in Guadalajara, Mexico. –

Warning: this story contains graphic details of allegations made in the lawsuit.

The 53-year-old so-called “apostle” of the of the Church of the Living God, Pillar and Ground of the Truth, The Light of the World, admitted to various child sex crimes earlier this year after a lengthy prosecution in the Golden State. He was subsequently convicted and sentenced to nearly 17 years in prison.

His church, which claims more than 5 million members worldwide, has stood by its shepherd through it all.

Now, in a 49-page complaint, the church, García, and several affiliated businesses and individuals are being sued for various damages to a class that is expected to include well over 500 alleged victims as plaintiffs.

The introductory lines of the complaint do not mince words and stake out shocking allegations that criticize the church, as a business, to its core as an enterprise that intentionally existed for the purpose of finding and providing children to be raped by the leader.

“Plaintiffs are individuals and residents of the State of California, County of Los Angeles, who were enslaved, trafficked, and sexually abused by the leaders of [the LLDM] a global religious institution that has made the economic and sexual exploitation of children and others a centerpiece of its operations for decades,” the lawsuit begins, using the Spanish version of the church’s name, La Luz del Mundo.

The five principal plaintiffs are Jane Doe women aged 20-28. They are the same five underage victims who were originally cited in the criminal complaint filed against García by California authorities – and a later indictment that listed several dozen counts against him. The pastor’s plea deal resulted in only three of those charges sticking.

The first woman alleges that when she was 14 years old, she was recruited into a fake “dance” group by García and his alleged “handmaiden,” Alondra Ocampo, a woman who would eventually plead guilty herself to four felonies involving the sexual abuse of minors.

“This group would privately ‘dance’ for [García]; however, the private ‘dances’ were, in actuality, the guise under which [García] repeatedly and egregiously sexually abused, assaulted, molested, battered, groped, fondled, penetrated, and/or sodomized Plaintiffs, including Plaintiff 1,” the filing alleges. “Once in this group, Ocampo would manipulate, force, coerce, intimidate, and threaten Plaintiffs, including Plaintiff 1, into serving [García], which included, but was not limited to, dancing for [García] in just their bras and underwear, fully nude, or in lingerie, giving him kisses on his cheeks and lips, sitting on his lap, fondling him, and dancing seductively and suggestively.”

The lawsuit goes on to detail a number of increasingly “pornographic” photo shoots involving “whipped cream,” other underage girls being forced to sexually assault and kiss one another as well as García, and even taking nude pictures “at a public beach in full view of the beachgoers.”

The girls who spoke up were allegedly treated to religious upbraiding by the defendants, the lawsuit says.

[The defendants] would negligently and manipulatively question the Plaintiffs’ faith, would carelessly distort bible verses to “prove” that this misconduct was not only acceptable but religiously moral and necessary, would explain that denying the Apostle would destroy their souls and endanger the salvation of themselves and their loved ones, tell them that their refusal to follow the will of the Apostle would bring shame, devastation, and tragedy to their families, and would remind the Plaintiffs that they had no choice but to accept this “blessing” as it was the purported will of the lord.

The second woman alleges that she was a virgin when García raped her and describes various allegations in detail.

“Once she had massaged his feet for some time, [García] demanded Plaintiff 2 take off her skirt and get on top of him,” the lawsuit alleges. “[García] began kissing Plaintiff 2 despite the fact that she was only fourteen and clearly crying. [García] then laid her down, pulled off underwear and began performing oral sex on Plaintiff 2. This assault ended only when another person entered the room, interrupting the abuse.”

García is also alleged to have raped two additional minor girls when they were still virgins at the time of the abuse, including one of his nieces, a great-granddaughter of the LLDM church’s  founder. Leadership of the church passes on dynastically from generation to generation of the same family.

The section concerning the alleged abuse committed against the convicted felon’s niece is particularly graphic.

From the lawsuit, again, at length:

Plaintiff 4 was instructed to wake [García] up every morning by performing oral sex on him.

Plaintiff 4 was also instructed to put him to sleep every night by reading him bible verses and again performing oral sex on him.

On one occasion, [García] forced Plaintiff 4 to take a shower with [García] and another LLDM groomer. While in the shower [García] sodomized Plaintiff 4 so brutally that she lost consciousness.

“Plaintiff 4 was forced to call [García] ‘uncle’ while he was raping, assaulting, and molesting her because it excited him to be sexually abusing his niece, a family member,” the filing goes on.

Each of the five plaintiffs allege they were originally snookered into the alleged LLDM sex cult by the faux “dancing” scheme. Additional alleged victims have since come forward, according to Religion News Service. The lawsuit anticipates a class of additional victims numbering in the hundreds.

Law&Crime reached out to LLDM for comment on this story but no response was immediately forthcoming at time of publication.