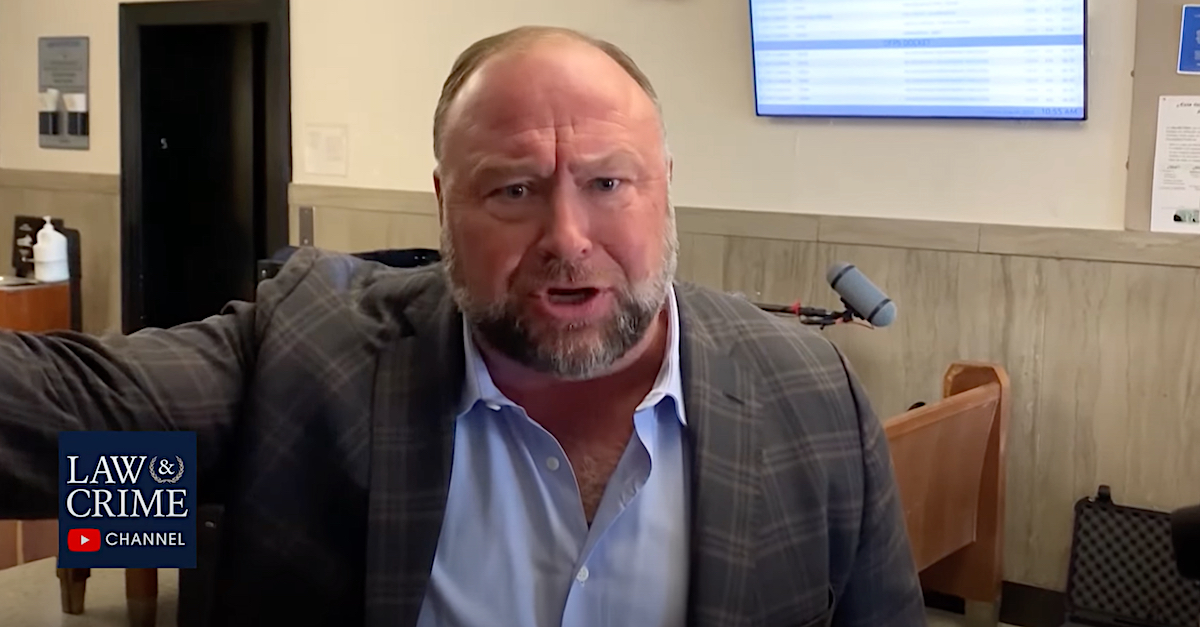 Alex Jones spoke to local reporters during His Texas defamation trial on July 26, 2022. (Images via the Law&Crime Network.)

A federal bankruptcy judge in the District of Connecticut on Monday refused to halt an upcoming defamation trial in state court despite a request for delay made by a company owned by Infowars host Alex Jones.

Free Speech Systems LLC filed for bankruptcy in Texas on July 29 while a similar defamation trial connected to the Dec. 14, 2012 Sandy Hook Elementary School massacre was ongoing in the Lone Star State. The company concomitantly sought relief from a swiftly approaching defamation case filed by other plaintiffs in the Constitution State. That request was lodged with a federal bankruptcy court in Connecticut on Aug. 2. The Connecticut plaintiffs immediately objected to the relief sought.

The Connecticut defamation trial was scheduled to begin with jury selection in early August; opening statements were scheduled for Sept. 6.

One of the issued cited by the bankruptcy judge was that the Jones-affiliated company didn’t file for removal until “after jury selection began” in Connecticut state court.

The bankruptcy judge also noted that Jones-affiliated organizations had pulled similar stunts in the past. Those moves apparently did not endear Jones’ causes to the courts (citations omitted):

The court then weighed seven factors to determine whether remand the case back to state court:

(1) the effect on the administration of the bankruptcy estate; (2) the extent to which issues of state law predominate; (3) the complexity of the state law issues; (4) comity; (5) the relatedness/remoteness of the action to the main bankruptcy case; (6) the right to a jury trial; and (7) the prejudice to the involuntarily removed parties.

Though Manning wrote that the factors are “non-exclusive” and that the decision is largely “equitable,” the judge determined that every single factor weighed in favor — sometimes heavily in favor — of sending the case back to the state courts.

Effect on the Bankruptcy Estate

“A remand will not have a negative effect on the administration of FSS’s bankruptcy estate,” she wrote while considering the first factor.

“Regardless of whether the claims are core or non-core, the claims must be adjudicated, and the Connecticut Superior Court is ready to do so,” the judge continued.  “A trial of the Plaintiffs’ claims in the Connecticut Superior Court may assist with the administration of FSS’s bankruptcy estate and will alleviate the need for another court to determine if the Plaintiffs’ claim are core or non-core.”

The parties disagree as to the latter issue, the judge noted  Core claims relate directly to bankruptcy matters. Non-core claims are ancillary issues which affect a bankruptcy proceeding but are not directly related to the filing.

“If the claims are non-core, this Court cannot enter a final judgment on the Plaintiffs’ claims,” Manning explained.

In other words, the case should go back to the Connecticut state courts where that can be done, she determined: “remand will not negatively impact the administration of FSS’s bankruptcy estate.”

One oddity Judge Manning noted was this: Jones claimed that the costs of defending himself in yet another defamation trial would negatively affect his company’s financial position. Manning also noted, however, that Jones recently sought “an order allowing it to increase its use of cash collateral based upon increased income due to better than projected sales of products since its bankruptcy case was filed.” In other words, cash is flowing into Jones’ coffers.

The second factor in the aforementioned series of tests also weighed in favor of remand, Judge Manning ruled.  That’s because the underlying defamation case is a matter of state law.

Accordingly, the next factors in the aforementioned list also weigh in favor of remand, the judge ascertained:

Remoteness of the Defamation Case

The fifth factor also supported remand, the judge ruled, because the defamation claims arose “years before” the bankruptcy filing.

Right to a Jury Trial

The Connecticut defamation proceedings resulted in a default judgment for Jones due to what the state court found to be flagrant and serious discovery violations. A trial has been called to ascertain damages only. Still, the bankruptcy judge said a trial should be had on that matter.

“[T]his Court cannot conduct a jury trial on non-core claims,” Manning repeated. “In addition, it is clear that the parties do not consent to a jury trial being conducted by this Court. A jury is in the process of being selected in the Connecticut Superior Court. The Plaintiffs’ rights to have that process continue in the Connecticut Superior Court should not be disturbed.”

Prejudice to the Sandy Hook Plaintiffs

This seventh and final factor weighed “heavily” in favor of remand, the judge wrote.

Accordingly, Judge Manning ruled that it was “appropriate to abstain and remand the adversary proceedings to the Connecticut Superior Court.”

Christopher Mattei, an attorney for several of the Sandy Hook plaintiffs, commented on Manning’s ruling.

“We’re grateful the bankruptcy court saw through Alex Jones’s brazen effort to block a jury from being empaneled and holding him accountable,” Mattei told NBC News. “We look forward to trial.”

Norm Pattis, an attorney for Jones who faces an ethics hearing this week in connection with the Jones cases, did not respond to an NBC request for comment.