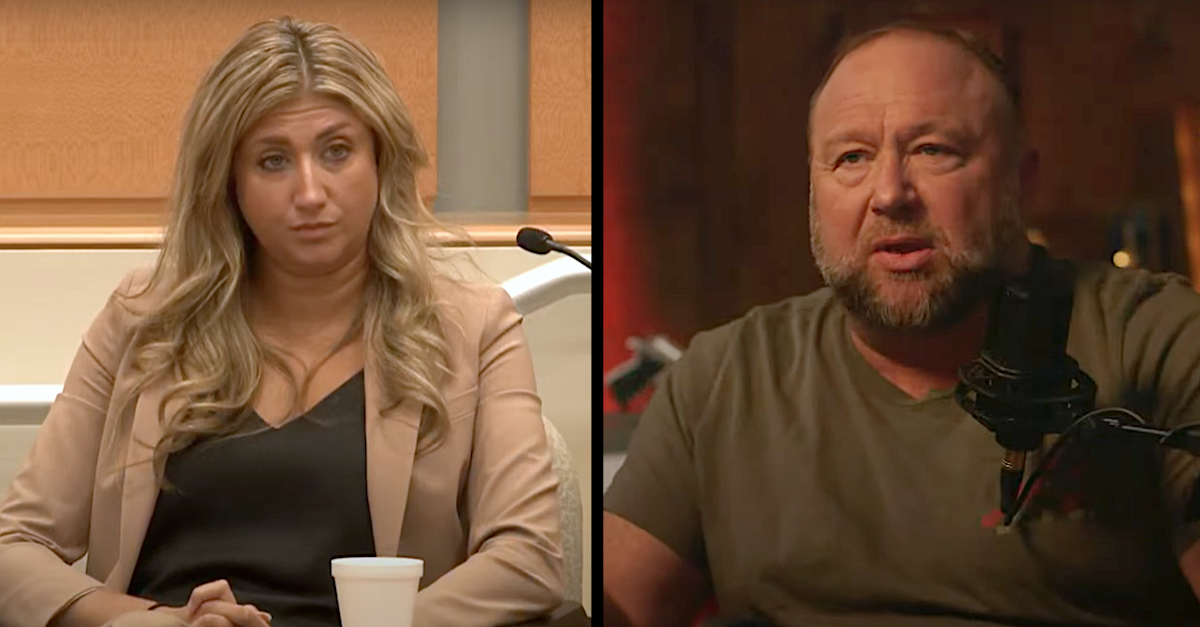 Infowars host and adjudicated defamer Alex Jones appeared on a broadcast led by conservative commentator Steven Crowder on Wednesday — all while a corporate representative for a company controlled by Jones spent the entire day in a witness chair on the company’s behalf.

In a rant that illustrated Jones’ misconceptions about the law, the conspiracy theorist who once claimed the Sandy Hook Elementary School massacre was a “hoax” sounded off on the status of the litigation against him.

Here’s one of Jones’ monologues:

Well, now what they do, is they do a default. So, they sue you in one of these key jurisdictions they control — if you’re dumb enough to live in one of them, and, but, still they’ll — still just do it in D.C. and make you go there. They’ll sue you in the jurisdiction where the judge assigned they control — and who is a political operative. This lady is a Soros operative — admits she is on her own, you know, Facebook. They will then pick the judge, sue you, and then for years say, ‘we want your discovery,’ and each time say, ‘this isn’t it, we want more — we want your bank accounts, we want the emails, they want the text messages’ — and then when you give them everything, they say, ‘you’re defaulted, you didn’t give us anything’ — and now they go and have a jury trial on how guilty you are. So, you’re not innocent until proven guilty, you’re not — you’re not — uh — guilty until proven innocent — you’re guilty until proven how guilty.

Jones and his companies were found liable — not necessarily “guilty” — by default for failing to meet repeated discovery demands in civil litigation launched by the families of the victims of the Sandy Hook massacre in Newtown, Connecticut, in December 2012.

A Texas defamation trial this summer resulted in a judgment against Jones and his companies; a Connecticut defamation case commenced on Tuesday.

Jones was incorrect on several points in the aforementioned speech: while forum shopping is oftentimes a legal reality, a defendant cannot be sued in a remote jurisdiction without having maintained minimum contacts with that jurisdiction. (In other words, there are guardrails on the process.) Litigants also generally cannot select the judges who oversee their cases — judges are generally drawn or appointed at random. Jones also incorrectly assumed that the presumption of innocence applies to civil proceedings; generally, it does not, and civil defendants who do not participate in the proceedings filed against them can be the subject of default judgments. Additionally, the use of the word “guilty” in his soliloquy suggested that civil plaintiffs have the same burden of proof as government prosecutors in a criminal matter. They do not. Criminal cases often focus on what the government knows; e.g., whether prosecutors have enough evidence to convict beyond a reasonable doubt. Criminal defendants enjoy Fourth and Fifth Amendment privileges that protect against government abuses. Civil cases have lower burdens of proof, and discovery is more free-flowing by comparison.

Despite the many clarifications that could be applied to Jones’ rant, Crowder said he agreed with Jones as to the core assertions. Crowder only challenged the Infowars host as to whether or not the judge was a “Soros operative.” Jones then complained that the judge to whom he was referring — he did not name her, and the judges in both the Texas and the Connecticut cases were and are female — has “purple blue hair and has all these Soros-funded PACs on the site, and she gets money out of the PACs that are funded by Soros.”

Crowder also said he “cannot confirm nor deny” whether Soros paid for the judge’s “blue hair dye” and that clarified that the judge in question never stated verbatim that she was a “Soros operative.”

Jones then complained that the “corporate media” didn’t adequately describe how the punitive damages award against him will be capped in Texas.

Jones also complained that the media didn’t rally to his aid when it came to the default judgment proceedings that ensnared him. (He characterized those default losses as due process violations, even though they have long been part of the rules of civil procedure.)

Jones then called the Texas trial he recently endured a “fake little mini-trial” and said the public was somehow being hoodwinked over what happened to him.

When Crowder asked Jones about his Sandy Hook broadcasts, the Infowars host said one of the worst parts of the litigation was having to watch recordings of himself from ten years ago.

Jones then said other people started suggesting there was a cover-up related to the school massacre and that he simply started covering it.

As Jones and Crowder were being streamed on YouTube, a corporate representative was being grilled in a Waterbury, Connecticut courtroom about the role Jones’ company — Free Speech Systems — played in the controversy.

Connecticut lawyer Brittany Paz, who formerly worked with Jones attorney Norm Pattis and who has appeared with Pattis on a radio show, assumed the role of testifying on behalf of Free Speech Systems as a corporate entity.

Paz testified that she was not a regular Infowars viewer and was not an employee of the company, which is based in Texas. She said she had visited some of the company’s operations there but had not seen at least one of Jones’ studios.

Paz’s testimony behalf of Infowars was marred with frequent and repeated declinations to respond to the questions asked because her knowledge of the company was limited.  Attorney Christopher Mattei, who represents the Sandy Hook families in Connecticut, seemed to both loathe and exploit that situation.

Mattei at times openly chided the company for not choosing a more thoroughly versed individual with intimate knowledge of the entity’s finances and operations to face questions in the Constitution State.  He repeatedly suggested that Free Speech Systems could have sent Jones to speak on its behalf — Jones owns and controls the company — and that the company failed to provide key information to Paz for a pretrial review.  In other words, per Mattei’s questioning, the company was trying to hide its affairs from the jury.

Paz said she hadn’t spoken to Jones in the five months prior to trial, wasn’t provided videos of key broadcasts, and at one point suggested she had seen an important email that Mattei believed didn’t exist. As to the latter, he asked Paz to review her materials and to produce the email in question when she returned to court tomorrow. Paz suggested she may have been misconstruing an article with an email.

During the back-and-forth between Paz and Mattei, a theory by the plaintiffs emerged. Mattei suggested that Jones watched audience metrics on platforms such as Google Analytics and looked for topics and trends that brought large numbers to his broadcast. Those numbers, the questioning and the testimony suggested, would push more viewers and listeners to purchase the vitamins and supplements Jones advertises on his company’s platforms. Paz testified that the sales of those supplements brought in the bulk of Infowars’ revenue. More specifically — and to Mattei, more nefariously — Jones would look for strong sales days and then replicate or revisit the same topics on future broadcasts in order to replicate strong sales.

The two used the terms Infowars and Free Speech Systems interchangeably throughout the day’s questions and answers.

Mattei noted that Infowars saw an audience increase in 2013 after Jones floated theories about Sandy Hook being a “hoax.”

“I can’t recall the numbers as I’m sitting here,” Paz responded, but she did agree that the numbers spiked.

The full day’s testimony is here: