‘I Think It Ruined Me’: Murder Defendant Testifies that Former Schoolmate Is Tara Grinstead’s Real Killer, Accuses Co-Defendant of Fondling the Body Before Burning Remains 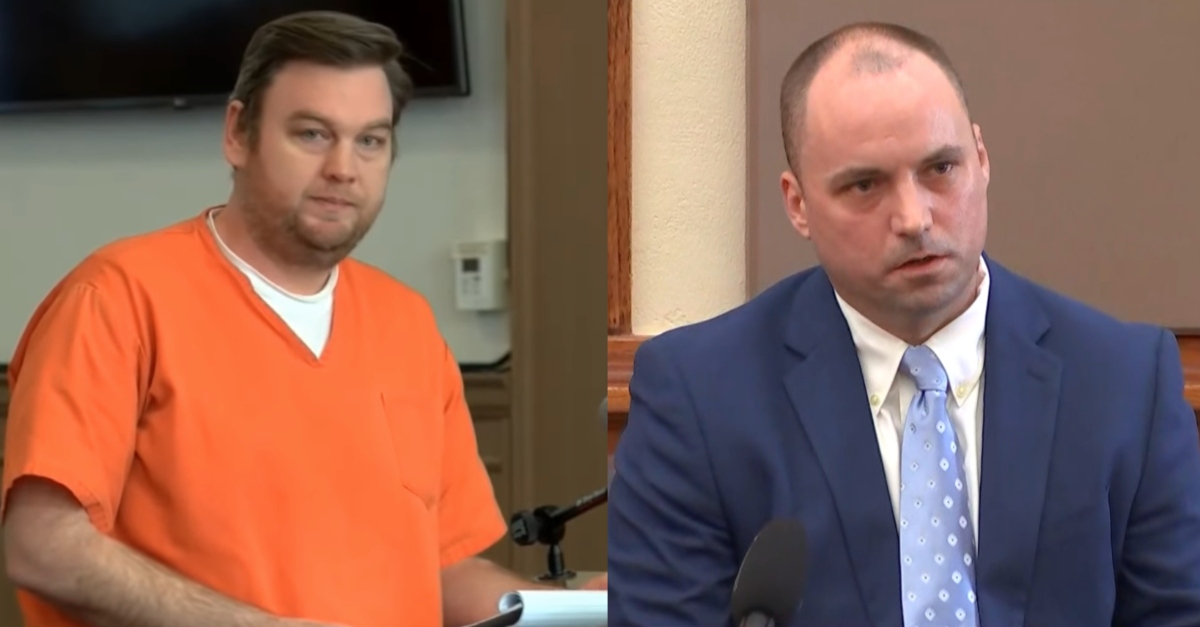 A man accused of murdering a Georgia teacher made a series of horrific claims about his co-defendant during trial, alleging that it was in fact the other man who took the teacher’s life.

Ryan Duke, who is on trial for allegedly killing Tara Grinstead at her Irwin County home in 2005, testified it was actually Bo Dukes (no relation) who killed her. Bo recruited him to help burn the body, Ryan said, but before they carried that out, Bo fondled the corpse.

“He pushes up her shirt, starts fondling her,” Ryan testified during direct examination on Tuesday. Ryan said that Bo didn’t initially look at him while committing the act.

“I remember telling him to stop, and I remember how he looked at me. It was like I had never seen him before,” Ryan said. Asked how Bo looked, Ryan said he couldn’t articulate it. “I don’t have the words to describe it.”

Prosecutors said that Ryan broke into Grinstead’s home some time after she was last seen on Oct. 22, 2005. Grinstead, a teacher at Ryan’s former school, Irwin High School, is believed to have walked in on him burglarizing her residence, and he fatally struck her. He confessed to investigators in 2017, telling them he got Bo to help burn the body.

But Ryan has since flipped the script: he now says that it was Bo, his former schoolmate, who killed Grinstead, and it was Bo who recruited Ryan to help burn the body.

Bo was already convicted and sentenced to 25 years in prison for burning the body. At his sentencing, Bo—who has denied killing Grinstead—described his actions as being “cowardly” and a matter of self-preservation at her expense and at the expense of those falsely suspected in her murder.

“I failed Tara Grinstead,” he said. “I failed her family. I failed the local community. And I hope these proceedings have given some closure to the many people hurt by my actions, and I want each of you to know that I am truly remorseful.”

Ryan said that he kept the secret throughout the years because he was afraid of what Bo might do to him or his family. Asked why he falsely confessed, Ryan said it was because he did not think Bo would tell the truth. He said he changed his mind about it later because he couldn’t lie to his own father about it.

From the start of his testimony, Ryan denied multiple allegations, including murdering Grinstead, breaking into her home, being in her home, having a sexual relationship with her, striking her, choking her, being in her car, and taking a pair of gloves to her home. He admitted to seeing her body in a pecan orchard after she died, and he testified that Bo took him there.

Bo admitted to killing her, Ryan said. He testified about not knowing how the murder happened, only that Bo asked for help getting rid of the body.

Ryan described a fraught relationship with Bo, saying they only started hanging out during his own senior year of high school. He said that he didn’t think Bo had a good reputation among their friends: Bo “caused scenes” to make other people uncomfortable, for example, and he was not considered trustworthy.

But the friends reunited after Ryan was discharged from the Army for going AWOL from stress when an 18-year-old woman died in a parachuting accident. Both Ryan and Bo lived with Ryan’s brother, Ryan said, but Bo never contributed financially, although Bo, who had a truck, would take Ryan to work.

Ryan said that there were also disputes over in-home behavior. Bo, according to Ryan, left out pornographic material depicting “bondage” and violent sex acts.

“I found them offensive,” said Ryan, who testified that he told Bo not to leave the material out for everyone to see.

Ryan said the pivotal night happened after he passed out on Oct. 22, 2005 from drinking beer and tequila. The last thing he remembered, he said, was passing out the bathroom, hugging the toilet. Bo woke him up early on the 23rd, appearing panicked, freaked out, and even more pale than he already looked, Ryan said.

The prosecution objected to Ryan telling the court what Bo said to him, describing it as hearsay. The judge sustained the objection, and defendant Ryan used only vague terms to described what he heard.

“[Bo] said something that freaked me out,” Ryan said.

The two men went to the orchard, driving down the trail. Bo, as he was getting out of the truck, said “she was over there,” according to Ryan’s version of events.

“I still think he’s screwing with me,” Ryan said at trial. “I think this is a joke.”

But according to his testimony, Ryan soon saw a spot “covered up” by debris from the trees. He  could not immediately tell this was a person, just “something that didn’t belong there.” He eventually recognized this as a person, but he didn’t know whether it was a man or woman until Bo turned her over.

“He reaches down, he grabs her arm, and just flips her over,” Ryan said, describing it like the motion of opening a cellar door or cranking a lawnmower. He claimed that he would not have known it was Grinstead if Bo didn’t tell him.

In Ryan’s account, Bo broke open the locked door of a barn, and took out wood, which they later used to burn the body.

“He’s almost excited,” Ryan said, describing how he interpreted how Bo felt about being back at the body. “Cheerful.”

Ryan described himself dry-heaving and crying at one point. Bo started laughing at him, he said. Asked if he said anything to Bo, Ryan said he didn’t think he could say anything at that point.

“It’s like he wasn’t there,” Ryan said, describing Bo’s demeanor.

Ryan testified that Bo insisted that Ryan could not tell anyone about this. Ryan said he did not reveal the truth until after his arrest because he did not think anybody would believe him. Bo repeated these entreaties over the times, Ryan said, including a brief meeting years later, in which he wanted Ryan to do cocaine with him. Bo also threatened to burn down his home, Ryan said.

“He implied this place would go up like wild fire,” Ryan said, describing Bo as a pyromaniac who would light fires and watch fire videos on YouTube. “It was kindling.”

Ryan testified about attempting suicide several times and engaging in prolific drug and alcohol use over the years. He drank, took pills, and used marijuana on an almost daily, if not daily, basis, he said. That included before his fateful 2017 interview with an agent of the Georgia Bureau of Investigation. He took morphine, Percocet, “probably a couple of Vicodin,” and smoked marijuana before that because he knew he wasn’t coming home.

Asked how the incident with Grinstead’s body affected him, he said, “I think it ruined me.”